The Washington Capitals came back from celebrating the Christmas break with a pair of wins in Week 13 to extend their winning streak to four games.  It was not the most electrifying week this season, but one more of the “grind it out” variety in posting wins.  That, however, is not to say it was an uninteresting week as the team showed it could get contributions from unexpected places. 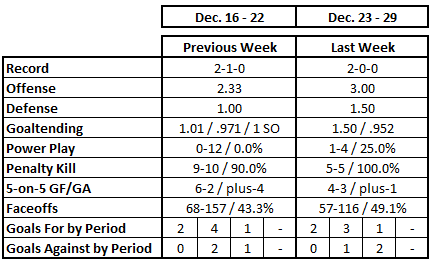 The Capitals’ knocked off the Carolina Hurricanes, 3-1, and then followed that up with a 3-2 win in Ottawa against the Senators to close the abbreviated schedule for the week.  The two-win week left them at the top of the Metropolitan Division, a spot they have occupied uninterrupted since November 30th.  The two wins extended their most recent winning streak to four games, their third winning streak of four or more games in their last 19 contests over which they posted a 16-3-0 record.

The Caps’ recent run has pulled them into the upper reaches of the Eastern Conference.  They closed the week only three points behind the Toronto Maple Leafs for second place in the conference with two games in hand.  They still have work to do to challenge the Tampa Bay Lightning for the top spot in the East.  The Bolts finished the week 11 points ahead of the Caps, having played two more games than Washington.  At the moment, Tampa Bay is the only team that could lay claim to being hotter than the Caps.  The Lightning are 16-1-1 in their last 18 games.

The two wins ended an odd stretch of the schedule.  The Caps wrapped up a nine-game stretch over which they played only Eastern Conference teams, posting a record of 8-1-0, the only loss a 2-1 decision at the hands of the Pittsburgh Penguins. 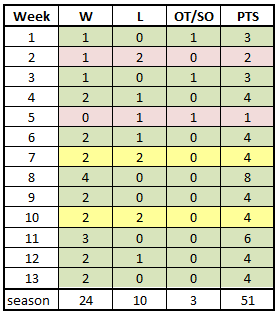 It was not the most prolific of weeks, but it was balanced.  The six goals scored by the Caps came off the sticks of six different players.  It was also something of a youth movement.  Tom Wilson, 24 years of age, opened the scoring in the Caps’ 3-2 win over Ottawa with his 11th goal of the season in only 18 games.  In the same game, Tyler Lewington, also 24, recorded his first NHL goal in only his second NHL game.  And also in that game against Ottawa, Madison Bowey, 23 years old, scored his first NHL goal in his 78th game, what would turn out to be the game-winning goal in that contest.

Four different Capitals had multi-point weeks.  Lewington had one, adding an assist to his goal against Ottawa (he would also add a fighting penalty to his ledger for that game, earning the “Gordie Howe Hat Trick”).  Wilson and John Carlson recorded a goal and an assist, the goal by Carlson (an empty-netter) in the 3-1 win over Carolina being his first since October 22nd, breaking a 26-game streak without one.  Nicklas Backstrom had a two-assist week to round out the multi-point players for the Caps.

The Caps had a rather typical week in allowing shots on goal and shot attempts, which is to say, not a great one…on paper.  They were a minus-19 in shot attempts for and against at 5-on-5, tied for 24th in the league for the week.  And, of the six teams with worse numbers, four played three games.  On the other hand, the team having played two games with the worst differential in the league – Pittsburgh (minus-23) – outscored their opponents by an 11-3 margin in their two wins for the week.  It happens.

It is worth noting that the numbers might have been influenced by game status.  Washington’s shot attempts for percentage at fives when behind was 0.0 percent, owing to the fact that at no point in Week 13 were the Caps trailing.  On the other hand, the Caps were 30th in the league in differential at 5-on-5 when ahead (minus-28) and worst in the league among teams playing only two games (Dallas was minus-30 in three games).  The Caps did spend 89:15 with a lead for the week out of 120 minutes, so that was going to be a high minus number, given how shot attempts generally play out when leading in games.

And that brings us to an interesting fact about Caps backup goalies.  In Calendar 2018 to date, the Grubauer-Copley backup tandem appeared in 35 games, started 30 of them, and had a record of 22-7-1, 2.32, .925, with one shutout.  There might not be another position on the ice in 2018 from which the Caps got more production relative to expected role.

Washington’s entire performance on the power play in Week 13 came in their 3-1 win over Carolina to open the week.   That they had one goal in four chances after going 0-for-three times as many chances (12) in Week 12 was a plus.  That they did it against one of the better penalty killing teams in the league (Carolina finished the week 11th in penalty killing, fourth-best in road games) made it better.

As it was, Alex Ovechkin and Nicklas Backstrom combined for five of the seven power play shots on goal against Carolina (three and two, respectively), but it was T.J. Oshie getting the lone goal on his only “shot,” a redirection of a John Carlson drive that would end up being the game-winning goal in the 3-1 win. 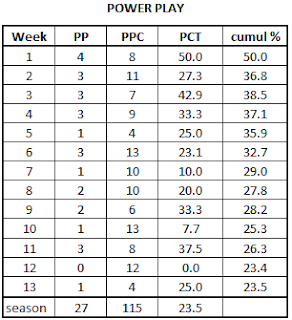 The bad news about that is that the Caps followed up their fine Week 9-10 penalty killing with two poor weeks (16-for-25/64.0 percent).  The good news is the underlying performance of Week 13.  The Caps did allow Carolina four power play chances, but they permitted only three shots on goal in 8:00 of shorthanded ice time.  In their lone shorthanded situation faced against Ottawa, the Caps did not allow a shot on goal over the two minutes.  The five shorthanded situations faced for the week are the second-fewest faced in a week this season (four situations faced in two games in Week 5, also an instance in which all of them were killed off). 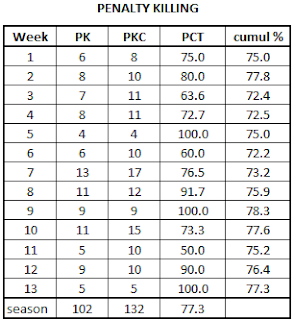 At this point, it is safe to say that this version of the Capitals is not especially adept in the faceoff circle.  They do muster good efforts from time to time, but as a team and individually, they are inconsistent – from zone to zone, game to game, and week to week.  The issue in Week 13 was the difference between offensive and defensive zones.  Washington was unproductive in the offensive zone for the week, under 50 percent in both games and only 35.0 percent for the week (14-for-40).  It was better in the defensive zone, but barely.  The Caps split the two games, 10-for-16 against Carolina but only 8-for-18 against Ottawa to finish one win over 50 percent for the week (18-for-34).

Individually, the light schedule made for only three Caps with at least ten faceoffs taken.  Nicklas backstrom was the only one of the three to finish over 50 percent for the week owing to his being over that threshold in all three zones.  Lars Eller had a difficult week, his 44.8 percent saved only by his neutral zone performance (6-for-9).  He was 7-for-20 in the ends (35.0 percent).  Evgeny Kuznetsov had a typical week (read: under 50 percent), but he did have the distinction of being the only Capital taking more than one faceoff against the Senators in the second game of the week to finish over 50 percent (6-for-11/54.5 percent). 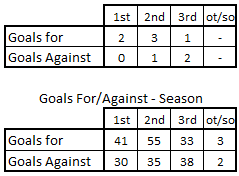 There was not much meat on the bones in terms of the goals by period for the week, given there were only two games played.  But there were good signs here.  The Caps did not allow a first period goal while scoring two of their own (both against Ottawa), and they scored first in both games.

The Caps could stand to finish better, though.  They were a minus-1 for the week and finished Week 13 tied for 24th in third period goals scored (33) and a minus-5 in goal differential. 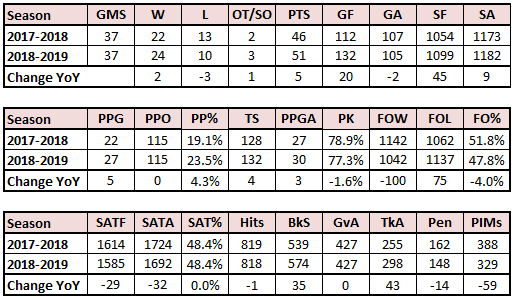 If there is one thing that one notices looking at the year-over-year numbers, it is how much more efficient this year’s team is over last year’s.  For instance, the Caps are down by 1.8 percent in 5-on-5 shot attempts, yet their total shots on goal are up by 4.3 percent.  And, with more shots on goal, the Caps are scoring on a higher percentage of them – 12.0 percent so far this season (second in the league to, yes, Tampa Bay at 12.4 percent).  It makes for a 17.9 percent increase in goals scored and going from a plus-5 goal differential through 37 games last season to a plus-27 through 37 games this season.

In other respects it is noteworthy how much this season looks like last.  Differences in goals against, power play chances, shot attempts-for percentage, hits, and giveaways are virtually unchanged from this point last season.

The Caps are about to end their best calendar year in team history with a strong finish.  Their 16-3-0 record going into the year’s finale against the Nashville Predators on Monday is the league’s second-best record since November 16th (Tampa Bay is 17-2-1).  No team has allowed fewer goals (45), and only five have scored more than the Caps (73).  The good news there is that the success was largely a product of superior 5-on-5 play, but the flip side of that is that the special teams have been comparatively weak, the power play at 17.8 percent (18th) and the penalty kill at 82.5 percent (11th).

Through 13 weeks, the Caps have earned a spot in the conversation as to which teams are the most serious Cup contenders this season.  Their consistency (only one losing week in 13 to date) makes them a formidable opponent over long spans of games, of the sort one sees in the spring.  That they are doing it with an incomplete lineup (defensemen Brooks Orpik, Christian Djoos, and Matt Niskanen are out of the lineup as of the end of Week 13) is testament to their steely nature, hard won from last year’s playoff run, and their ability to grind out wins in a variety of ways.

Three Stars:
Posted by The Peerless at 11:00 AM No comments: