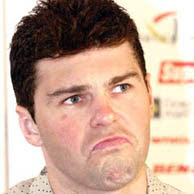 Of some relevance to the Capitals is the option year left on the contract of former Cap, Jaromir Jagr. He can trigger that option if any of the following scenarios occurs:

-- If the Rangers win a playoff round this season and Jagr scores 40 goals during the regular season.

He is far off the pace for a Ross Trophy, which means he won't get consideration for the Hart. And as for the Smythe, if a Ranger wins that one, it is more likely to be Henrik Lundqvist than Jaromir Jagr.

That other Bruce...the nutty one

Dear Aunt Fannie, what is it with hockey columnists when we go away for a few days? Do they OD on pumpkin pie, or what?

Now, it's Bruce Garrioch, the Ottawa Sun's answer to Larry Brooks...and boy, does he have a feast of rumors for Caps fans...

All Capitals GM George McPhee did by firing coach Glen Hanlon was buy time. The whisper is owner Ted Leonsis has already initiated the search for a new GM and all McPhee is doing is keeping the seat warm. Don't be surprised if former No. 1 pick Brian Lawton gets a look. Lawton was an agent with Octagon Hockey, but stepped down to pursue an opportunity in management. Other candidates include TSN analyst Pierre McGuire and former Islanders GM Mike Milbury, who is also working for the network...

The Peerless knows little about Brian Lawton in terms of his managerial potential, and Pierre McGuire might not be a total imbecile in the position. But as for the matter of Mike "The Idiot" Milbury, The Peerless has but one word....

Did Ducks GM Brian Burke really give away G Ilja Bryzgalov on waivers? The story making the rounds is the Ducks agreed to take D Brian Sutherby from the Caps for a second-round pick so McPhee would pass on Bryzgalov. That allowed the Coyotes to pick up the netminder off waivers.

The Peerless actually thinks this idea has merit. Not picking Bryzgalov (which would have been an upgrade at the backup position for the Caps), then getting a second round pick for a player who couldn't find his way onto the fourth line of a struggling team...well, you do the math.

Is Olaf Kolzig on the move? That's likely up to him. The veteran goaltender has been a good soldier for the Capitals, but he'll be an unrestricted free agent at the end of the season. Making $5.45 million this season, Kolzig has always maintained he wants to finish his career with one team, but there's a strong belief the Caps might give him the chance to exit. The word is Edmonton GM Kevin Lowe has been casting covetous glances in Kolzig's direction because -- among other things -- the Oilers haven't been happy with the performance of either Dwayne Roloson and Mathieu Garon.

Kolzig does make $5.45 million, and he is an unrestricted free agent at the end of the season. And yes, he has indicated a desire to finish his career with one team. That about covers the "facts" portion of this blurb. Will the Caps give him the option of leaving at the trade deadline, if the Caps are out of contention? We suspect they will...but Edmonton? The Oilers figure to be out of contention sooner than the Caps -- the Caps have played badly, the Oilers are just plain bad. What would possess Kevin Lowe to rent Kolzig for six weeks? What would possess Kolzig to sign an extension there? What would possess The Peerless to use the word "possess" four times in one paragraph?
Posted by The Peerless at 10:23 AM 1 comment:

Well, it was bound to happen...

The Capitals have not yet inked Alex Ovechkin to a new contract, so he who believes all hockey begins at West 31st Street and ends at West 33rd Street in Manhattan has weighed in...

Maybe someone can provide one good reason for Alex Ovechkin to sign a new contract with the before becoming a restricted free agent on July 1, because we sure can't think of any.

Yes, it's our old pal, Larry Brooks, who believes that it is the divine right of the Rangers to acquire any player of note, putting forth the argument without actually saying the words, "NEW - YORK - CITY," that Ovechkin should trade in his Capital red for Broadway blue.

Brooksie tip-toes around the issue, but gets to the point in a tortured way...

Ovechkin does not belong to the Caps. Through no desire of his own, he merely is playing for Washington under a three-year, entry-level capped lease that will expire at the end of this season. He never chose to play in DC so much as he chose to play in the NHL rather than remain in Russia after the lockout.

The Caps did nothing to earn Ovechkin other than being lousy in 2003-04 before then winning the Draft lottery to leapfrog both the 29th-overall Blackhawks and 30th-overall Penguins.

"Does not belong to the Caps..." The only thing missing is the unspoken thought, "but should belong to the Rangers." While Caps fans might fret over the status of contract talks with the young Mr. Ovechkin, contrary to what Larry says Ovechkin does belong to the Capitals, and he will -- at the pleasure of the club -- for the next five seasons.

Larry will have to settle for the idle fantasy of Scott Gomez and Chris Drury not getting Ovechkin the puck, either.

In the meantime, do read Caps Nut's essay that is the latest entry in the continuing Idiocy of Larry Brooks...he's got it nailed.
Posted by The Peerless at 9:30 AM 1 comment:

The Peerless Prognosticator is ON THE AIR!!! -- Caps vs. Sabres, November 26th

Caps fans are happy this morning…well, maybe as happy as Caps fans get, the product of having won two games in a row under new coach Bruce Boudreau. With two games in the “W” column, it might be time to take the pulse of Caps Nation – now that it has one – and check the ol’ mail bag…

See, that wasn’t so hard, was it? It’s always tough the first time, but then it gets easier, especially when you hire the same guy back several times.

Signed,
George in the Bronx

George…you going to hire Billy back one more time? You can’t do any worse than you’ve done the last half dozen years.

I probably shouldn’t mention this, but I hate wings.

Signed,
The City of Buffalo

Buffalo…add it to the list – snow, Super Bowls, Bill Belichick…

Hey, we’re going to have our own special on Food Network. What’s our special recipe?....Turnovers!

Joe…I would have thought “toast”…like in your playoff hopes.

Do you have any good recipes for turkey leftovers?

CDB…you’ve been reading this column too much.

Dan…you’ll have to ask Ted on that one.

Signed,
The Great and Powerful Oz

Oz…don’t you have a balloon to catch?

Well, so much for the mail, what about the game? Tonight it is the Buffalo Sabres that visit Verizon Center to take on the surging Caps (hey, two wins in a row is a surge in these parts!).

The Sabres find themselves – unexpectedly – on the outside looking in at the playoff mix. Being 10-10-1 after 21 games and 13th in the Eastern Conference probably wasn’t in the plan for the 2007-2008 season. It really is a “then and now” act for Buffalo over their first 21 games…

What this suggests is not that the Sabres lack talent on the offensive end – they don’t…not with the likes of Thomas Vanek and Derek Roy in the lineup. It isn’t even as if the team lacks the balance that has made them successful in recent years. Players such as Jason Pominville, Jochen Hecht, a healthier Tim Connolly, Brian Campbell, and the like, have contributed to having nine players in double digits in points (the Caps have four) and six players with at least two power play goals (the Caps have three).

What the Sabres lack – or have had to get used to – is not having Daniel Briere and Chris Drury centering the scoring lines. In the last ten days, though, Buffalo seems to have found their stride. They come into Washington with a four game winning streak, outscoring the opposition 15-5. Over those four games, typically, they've shown their balance. Ten different players have the 15 goals, none more than two (Vanek, Dan Paille, Drew Stafford, and Clarke MacArthur).

If you’re looking for a Sabre who bears close attention, it might not be the $7 million man, Thomas Vanek ($7.143 million, actually). It would be Derek Roy. In 11 career games against the Caps, Roy is 6-6-12, +11. Things happen when he is out there, and not usually good for the good guys.

The Caps, on the other hand, have rediscovered special teams…if you think back to those two wins to start the year, the Caps scored a power play goal in each game and held Atlanta and Carolina off the power play score sheet (0/8). In the last two wins, the Caps are 4-for-7 on the power play, and they’ve held Philadelphia and Carolina to one goal in eight chances.

Alexander Ovechkin hasn’t missed a beat with the coaching change – he is riding an eight-game points streak (7-3-10) and, consistent with his…consistency, has goals in six of those eight games.

With his five points over his last two games (1-4-5), Nicklas Backstrom has climbed to third in the rookie scoring race and is second among rookies in assists. His two game-winning goals tops the league’s rookies (ok, he’s tied with Erik Johnson), and he is one of only two rookies with an overtime game-winner (the Sabres’ Clarke MacArthur being the other).

This could be an entertaining game, if you’re of the new school of NHL hockey – a high scoring game with an emphasis on special teams. That’s what we think it is going to be, and the Caps will match their start out of the 2007-2008 gate with their third in a row for Bruce Boudreau…

OK...are we taking this 'logo' thing too far? 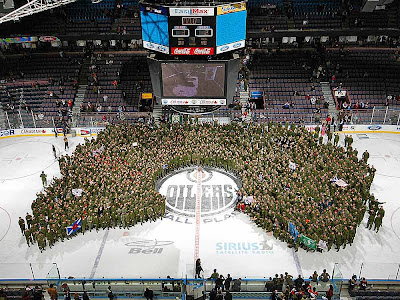 (Photo: Andy Devlin/Edmonton Oilers Hockey Club)
Posted by The Peerless at 3:44 AM No comments: