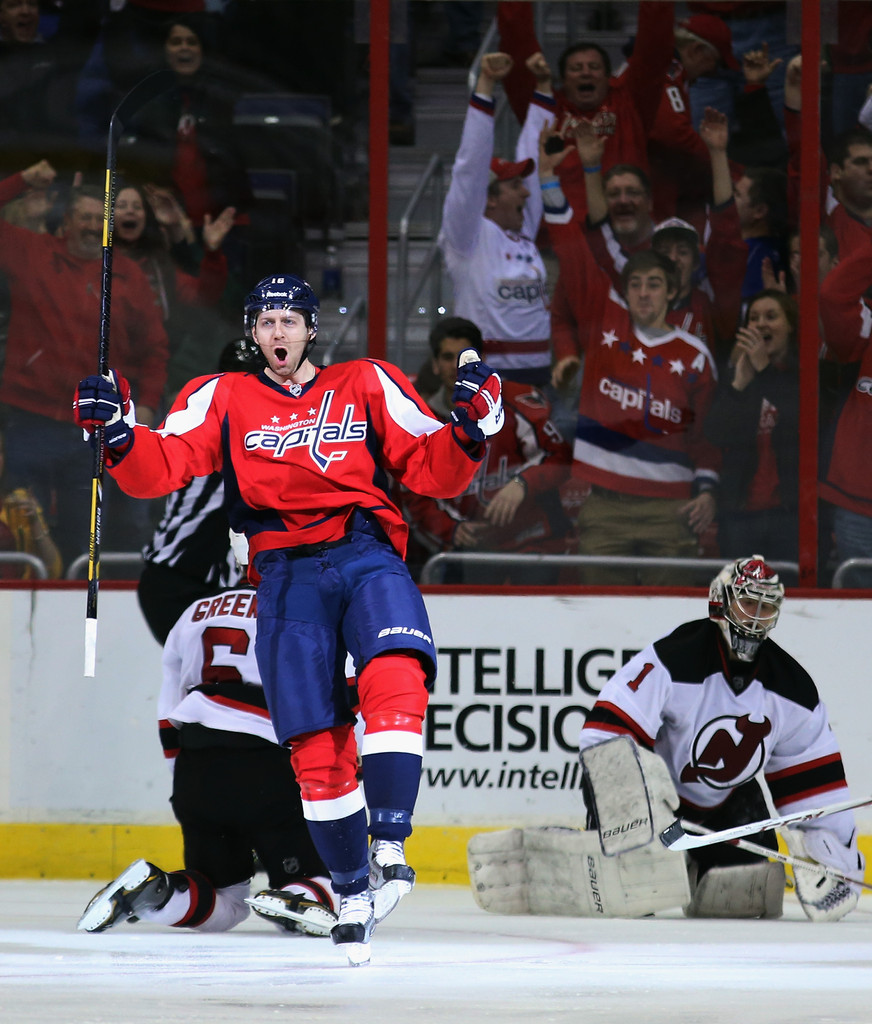 It has been quite a road traveled by Eric Fehr the last couple of years.  Once a first round draft pick of the Washington Capitals, a succession of injuries dimmed the promise he showed as a goal-scorer in Canadian juniors.  By the time he finished his sixth season with the Capitals in 2011, he had played in only 230 games and recorded only 46 goals.  At age 25, he seemed to be damaged goods and was shipped to the Winnipeg Jets in July 2011 for Danick Paquette and a mid-round draft pick.

As if things were not frustrating enough in Washington, Fehr’s 2011-2012 season in Winnipeg was a disaster.  It should have been a pleasant homecoming, Fehr being a native of Winkler, Manitoba.  Instead, he underwent shoulder surgery in October 2011 and missed the first 19 games of the season for the Jets.  He never recovered from the delayed start, posting only two goals in 35 games with Winnipeg.

With his two year deal originally signed with Washington now expired, Fehr was a free agent. Unfortunately, a 26-year old with a history of shoulder problems was not in high demand, and he signed a contract with HPK in Finland.  There, Fehr regained something of his scoring touch, posting 13 goals in 21 games.  With the NHL finally coming to its senses and reaching an agreement on a new collective bargaining agreement in January, the Capitals signed Fehr back on January 12th on a one-year, $600,000 deal just in time for the start of the 2013 season.

It took Fehr a while to get started, missing the first three games of the season with, yes, an “upper body injury," then going without a point in his first eight games.  But over his last 33 games he was 9-8-17, plus-16.  That is a 22-20-42, plus-40 pace over 82 games.  Not bad for a guy who finished tenth among Caps forwards in total minutes played this season.

There was, though, the infernal “Southeast Division” thing going on.  Fehr was 5-4-9, plus-14 in 15 games against the fellow travelers of the Southeast, while he was 4-4-8, even, in his other 26 games.  However, as Caps fans no doubt will remember, two of those four goals against other divisions were quite dramatic, including this one to end the regular season with a flourish…

An encouraging aspect of Fehr’s game was his contributions at even strength.  Yes, that is a big part of his job (or at least what Caps fans hoped he would be a few years back), but looking at the four players with whom he skated at least 100 minutes this season, the GF20 values at 5-on-5 (team goals for per 20 minutes at stats.hockeyanalysis.com) for three of those players – Mathieu Perreault, Jason Chimera, and Nicklas Backstrom – were higher with Fehr than they were when apart.  He also had solid next-lvel numbers.  Among Capital forwards playing in at least 20 games Fehr had the best PDO (sum of save percentage and shooting percentage), had a better ratio of penalties drawn to penalties taken than any forward except Marcus Johansson, the best Corsi on-ice relative to off ice, and the best plus-minus on ice per 60 minutes (all results from behindthenet.ca). 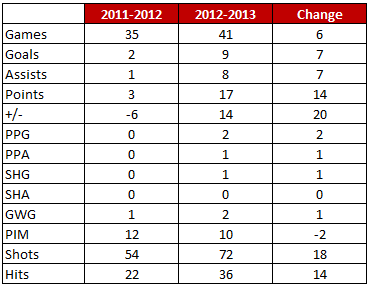 Game to Remember… March 5th vs. Boston.  It is something about the Bruins.  Eric Fehr recorded the only three-point game of his career when he had three assists in a Caps 10-2 win over Boston on March 3, 2008.  The March 5th game against the Bruins did not have the look of a game in which Fehr would repeat the feat, especially when the Bruins went out to a 3-0 lead before the horn went off for the first intermission.  But after Mike Ribeiro got the Caps on the board early in the second period, Fehr was credited with the primary assists on goals by Tomas Kundratek in the second period and Wojtek Wolski to tie the game in the third period.  He saved the best for last, though, just 37 seconds into the overtime…

Game to Forget… January 31st at Toronto.  Through two periods of the Caps’ game against the Maple Leafs, Eric Fehr spent a total of 2:06 on the ice and did not see a shift in the second period.  He got a couple of turns around the ice early in the third period, but the third shift was not the charm.  Fehr had two chances to stymie a breakout by the Leafs from their own end, first not quite getting a stick on a John-Michael Liles feed up to Matt Frattin.  Then, when Frattin could not collect the pass cleanly, Fehr was unable to tie him up along the boards.  Frattin broke free and headed up ice.  Seconds later, Frattin was on the business end of a feed from Nazem Kadri, and he buried it in the back of the net for what would be the game-winning goal in the 3-2 Leafs win on what was Fehr’s last shift of the evening.

Post Season… It just never came together for Fehr in the first round series against the New York Rangers.  That team best PDO among Caps forwards at 5-on-5 in the regular season?  He had the third-worst among Caps forwards playing in all seven games.  Plus-minus on ice per 60 minutes at 5-on-5?  Third-worst.  His relative Corsi, on-ice to off-ice, which best at 5-on-5 in the regular season?  Eighth among Caps forwards in the Ranger series.  He finished without a point in seven games, and he was on ice for each of the first four goals scored by the Rangers in their 5-0 series-clinching win.

Yes, the playoffs were a bitter end to the season for the Caps and Fehr in particular, but it was quite a comeback season.  The Caps rewarded him with a two-year, $3.0 million extension off his 2013 season production.  Fehr is probably a more well-rounded player than he was when he departed Washington in 2011.  He has become a better defensive player (only 14 goals scored against on-ice, none of them in penalty-killing situations, and he displayed some of the finishing skill hoped for when he was drafted.  The aim now is to build on this from a healthy foundation.  If Fehr can put together a solid 70-game season next year (he has yet to hit that mark in eight seasons), it could be the secret gate to career success.

Posted by The Peerless at 1:27 AM No comments: