Doodling About an "All-UFA Team" 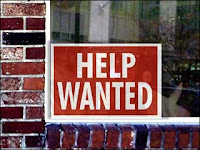 It is the end of July, and good googa-mooga, we are equal parts fried and bored. But in a never-ending effort to bring you, dear reader, with something to take to the rest room during your breaks at work, we took a look at the NHL.com “all-UFA” team and wondered what it might look like, based on last year’s performances.

First, we had to make some accommodations to the way the NHL.com team was put together. They named 15 forwards and eight defensemen to their squad. We went with 14 and seven, meaning that a forward and a defenseman had to be dropped. We dropped Arron Asham from among the forwards and Kim Johnsson from among the defensemen. Here is the 23-man team (goaltenders' win-loss records adjusted to their shares of an 82-game schedule): 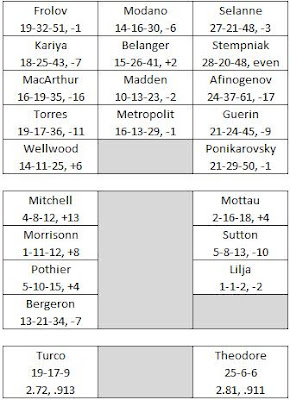 With the 23-man squad assembled, we note that based on goalie performance this team would be a 44-23-15 level of quality team, which is approximately equivalent to the record with which the Detroit Red Wings finished last season (44-24-14). But this team would get there in an entirely different way. Whereas the Wings finished the year with 223 goals scored and 207 goals allowed (for a plus-16 goal differential), the All-UFA team would finish with 293 goals scored and 261 goals allowed (a plus-32). The 293 goals scored would rank second on last year’s goals-scored rankings, behind only Washington, while the plus-32 goal differential would have ranked this team fifth in the league.

It would not be an especially big hitting team. Alexei Ponikarovsky led this team’s forwards in hits last season (146), which would place him 42nd in the league’s rankings. Lee Stempniak’s 87 hits would rank second among these forwards, but it would place him only in a tie for 147th in last year’s rankings. The defensemen have somewhat more representation in the hits rankings. Andy Sutton’s 197 placed him eighth among all NHL defensemen, while Shaone Morrisonn’s 163 hits placed him 21st.

It isn’t high on blocked shots, either. John Madden, with 58 blocked shots to his credit, ranked 25th last year among forwards. Only Clarke MacArthur (32) would also have ranked in the top-150 in the league. Among defensemen, Andy Sutton’s 204 blocks was second in the league, but no other defensemen in this group ranks in the top 75.

As a group the forwards are reasonably adept at protecting the puck. Maxim Afinogenov had the 15th highest number of giveaways last season, but no other forward ranks in the top-50. The defensemen struggle a bit more in this area. Sutton (64) was tied for 17th last season in giveaways, while Mike Mottau and Marc-Andre Bergeron both ranked in the top-75.

On the other side of that coin, Maxim Afinogenov ranked 11th among forwards in takeaways (65), while Lee Stempniak, John Madden, and Eric Belanger all ranked in the top-100 among forwards in that statistic. Among the defensemen, however, none on this squad ranked among the top-60 in takeaways. Any team on which Andy Sutton leads in this statistic (24) is not likely to be finding too many takeaways happening among the blueliners.

The nature of such a team is that it will not have any top-end scorers – the top goal scorer is Lee Stempniak (28), while the leading point-getter is Maxim Afinogenov (61). But every forward had double-digit goals last season. As prolific as the forwards are on offense as a group, so is that offense lacking among the defensemen. Marc-Andre Bergeron is the only member of this seven-man squad to have recorded at least ten goals last season and is the only one to have recorded at least 20 points. Bergeron also had seven of the eight power play goals scored by that group.

If there is a problem among the goaltenders, it is in the fact that both played for teams that had shots-allowed totals in the bottom half of the league standings. One should not expect that things would be much different on this team. No defenseman had a better than 1:1 takeaway-to-giveaway ratio last year, and only two had a ratio better than 1:2. And this group does not appear especially fleet afoot, either. It is a fairly sizable group though, averaging 6’3”, 212.

And here is the last thing with this team. Last year, it would have been a “cap-friendly” one, with a total cap hit of $54.7 million. This season, frankly, it might not be much (if any) less friendly. There are a sizable number of players who, if signed, are likely to be on their last contract and might be taking a pay cut to get it. Mike Modano, Paul Kariya, John Madden, Bill Guerin, Marty Turco, and Jose Theodore might be in that group. There are players with injury issues – Willie Mitchell and Andreas Lilja come to mind there. The rest are selling services in what looks like a reluctant market, skittish on the idea of giving big raises to anyone not named “Kovalchuk.” It might be a mark of how weak this free agency class is and how depressed the market is that this group – the best of the free agents remaining – can’t seem to yet find a job.
Posted by The Peerless at 12:01 AM 3 comments: