While we're looking at the first 13 games, as in the last entry, let's look at something else...attendance. The Peerless will wager that pretty soon, we're going to see someone mention that attendance is up over last year, and in fact, it is. As you will see from the table below, attendance through six home games is up 1,543/game over the six-game average last year. That's a 12 percent increase for those of you scoring at home...a good thing. 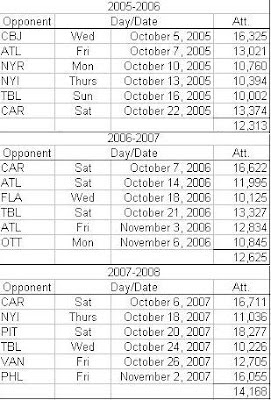 But if you look a little closer, there is the suggestion of a problem that hasn't gone away (we must caution that there aren't very many events to analyze here, so beware of drawing too firm a conclusion). There are two very clean comparisons in which one might have interest with respect to these numbers, and they speak to rivalries. There is the "new rivalry" group that is comprised of the Southeast Division opponents. Then there is the "old rivalry" group comprised of the old Patrick Division opponents. If you look at the three years since the lockout, they breakdown as follows:

The Caps opened the season with five straight games against SE opponents, four of them weekend night games.

What is notable here is that two of the three Patrick games were held on weekends and included a sellout (Pittsburgh) and the third highest attended game in the six held so far (the opener against Carolina was the second-highest).


We do not cite these numbers to state one way or another if Caps attendance is trending upward, downward, or hovering around a constant figure. There isn't enough information to reach any such conclusions. What we do wish to do, though, is get the reader to thinking...can the Caps make a go of it -- rivalry-wise -- against Southeast Division opponents? Or, do the longer distances between cities and the lack of playoff history among the clubs argue for continued struggles at the gate against these teams? Given that the Caps play 16 of 41 home games against these opponents, which question gets answered in the affirmative will go a long way to determining whether the early attendance gains can be sustained or built upon.
Posted by The Peerless at 12:30 PM