The agony of defeat

The Caps went to 4-0-0 last night with a 3-2 win over the New Jersey Devils in Newark, the game-winner coming on a shorthanded goal by Alex Ovechkin early in the third period. Michael Nylander added two assists as eight different Caps showed up on the score sheet.


But while the players round into regular season form in the usual ways, there are other role players who look like they're just about there. Donald Brashear and Pierre-Luc Letourneau-Leblond (PL3, for short) introduced themselves to one another last night. Brashear is, of course, well known among Caps fans. PL3 is a newcomer, but his coach, Brent Sutter says of him, "He's a battler. He's certainly willing. When he stays within the dimensions of his game, he's a pretty effective player. But I've said that since Day One – the first day – that we were happy with him. We're happy with what he brings here." We're guessing that the "dimensions of his game" are rather limited. PL3 might be a battler, but he appears to have gotten the worse of this matchup... 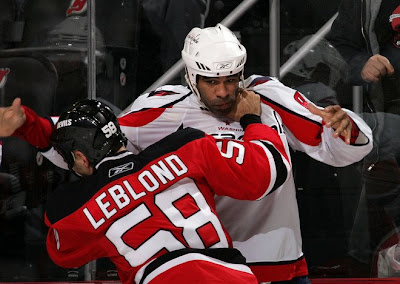 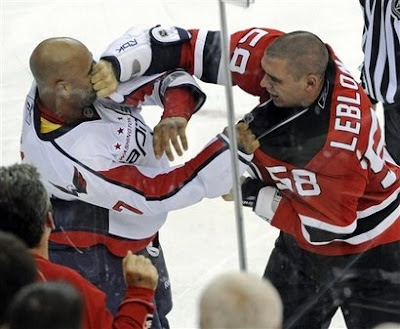 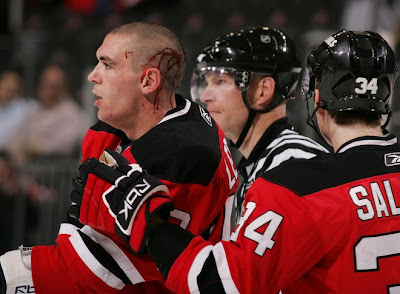 The thing is, though, after this fight, the Devils scored two goals to cut the Caps' lead from 3-0 to 3-2 (the second goal featured an assist by Fedor Fedorov, Sergei's younger brother). It was almost a case of losing the battle and winning the war, from the Devils' point of view.


(images: Bill Kostroun/AP, Bruce Bennett/Getty Images)
Posted by The Peerless at 6:14 AM

Email ThisBlogThis!Share to TwitterShare to FacebookShare to Pinterest
Labels: Brashear

Great point about the momentum change post-fight, though I thought it was more of the Caps getting a bit lazy in the third, guys taking long shifts, etc.