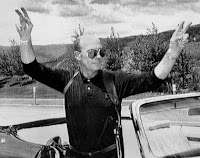 “The NHL on NBC” became reality television for the Pittsburgh Penguins today as they came in, found that instead of thousands, they had merely dozens of black-and-gold (or baby blue) clad fans on hand, and promptly laid an egg. The Caps clinched the season series and delivered a message, period and point blank in a 5-2 win.

The page has turned.

Caps fans and a national television audience saw two teams going in opposite directions this afternoon. The Penguins looked like a team whose moment is already over. The Capitals look like a team that might (he said while rubbing a rabbit’s foot and nailing up a horseshoe) have a parade to plan in June.

The Caps ended the competitive portion of the game in the first 35 minutes of the game, which was the time it took to put the five-spot on the record of goalie Marc-Andre Fleury. It’s probably a good thing, too, because at the other end of the ice, Caps goalie Jose Theodore was leaving some tasty rebounds to open the action. Of course, giving rebounds means he was stopping pucks in the first place. Fleury, on the other hand, wasn’t so fortunate. Maybe it was the back-to-back starts, maybe it was the defense in front of him, or maybe he just plain played poorly.

On the other hand, seems the Caps respond well to abuse. The practice they had after the Colorado debacle – the Kettler Death Skate – had the intended effect. The Caps pressured the Penguins early, made their defensemen handle the puck and make decisions quickly (for all his considerable gifts, this not one of Sergei Gonchar’s), and kept Sidney Crosby and Evgeni Malkin in check (each with an inconsequential assist on the same power play goal).

Meanwhile, Alex Ovechkin abused Fleury in the same fashion he’s abused other goaltenders – a one-timer from the left wing circle – for the game’s first goal. The thing with this one, though, is the passing between Sergei Fedorov and Nicklas Backstrom, which looks to be quite a match. From the right wing boards, Fedorov laid the puck out for Backstrom in the middle of the ice, who swept the puck in one motion to Ovechkin to fire before Fleury could get across. Chalk that one up to a team executing a play as diagrammed.

But then, Fleury’s day took a turn. Alexander Semin’s goal was the product of a waiting game between Semin and Fleury that took all of two or three seconds. It was a matter of who would commit first, Semin with the puck, or Fleury going into his butterfly. If you’re a Penguin fan, you’re wishing you had a stand-up goalie there, because it was Fleury who committed, and Semin stepped to the side and fired the puck top shelf into the net.

Goal three was on a feed from Semin – who swiped the puck from Jordan Staal, then froze Ryan Whitney in his tracks, making him believe he was taking the shot – to Fedorov, who was steaming down the middle. Fedorov let fly from the high slot with a slapper that sailed over Fleury’s blocker and into the net.

Goal four was the nail in the coffin of Fleury’s day, except coach Dan Bylsma couldn’t get him off fast enough. Alex Ovechkin circled with the puck through the Penguin zone and fired a shot from the right hash marks. Fleury made the save, kicking the puck to the far boards, where it ended up on Shaone Morrisonn’s stick. Morrisonn flicked the puck back at the net, and it went in – a dagger that came after the Penguins closed the lead to 3-2.

Bylsma finally put Fleury out of his misery on the sort of goal of which it might be said that the puck had eyes. The Penguins gave the puck away behind their own net, Fleury putting a pass intended for Hal Gill right on the stick of Semin, who then fed the puck high to Tom Poti. The Caps defenseman let fly with a slapper, but it sailed wide to Fleury’s right. Brooks Laich picked the puck up in the corner and just threw it at the net from below the goal line. The puck crawled over Fleury’s right pad and dropped on the line, then trickled just across before Gill could sweep it out. And thus, Fleury’s day ended.

It was not a clinic in goaltending.

After that, the game was essentially a matter of two issues. First, would the Caps get the crowd an order of free wings by getting a sixth goal (they didn’t), and would the referees march Caps to the penalty box (they did). The Penguins would be the beneficiaries of three third period power plays (the Caps would receive none), perhaps in an effort to keep hordes of fans from turning the channel to the latest boring early season golf tournament action on CBS (final round of the Northern Trust Open).

But here is where the pain of the Saturday practice perhaps came into play. On the three power plays, the Penguins managed only four shots, and only one in the last two combined. None of them were by Evgeni Malkin, and only one was registered by Sidney Crosby.

Game over, thanks for coming…drive safely. Some other stuff…

-- We’re betting there was a new – or at least a substitute – official scorer for this one. The teams were credited with a combined 80 hits… eight-zero hits. Only two Penguins (Mark Eaton and Petr Sykora) failed to scratch that column of the score sheet.

-- Marc-Andre Fleury was credited with three giveaways, an uncommon number for a goaltender (yeah, he was that bad today). He would have led the team but for the Golden Child, who had five.

-- On the other hand, a guy who didn’t get a star we thought had a monster game. Brooks Laich netted a goal, had a couple of hits, and won a pair of faceoffs he took. But that’s a case where the official numbers don’t do the player justice. He was harassing Penguins all over the ice, as if he was some herring on steroids looking to avenge all the kin who were snacks along the way.

-- Speaking of harassment, it might not have been clear on TV, but every opportunity that presented itself to jostle or yap at Crosby was taken. Ovechkin was in on it, Laich, the defense, it seemed like everyone had something to say to Crosby. Some of it was in response to stick work from Crosby, some of it was just to be friendly. It seemed to have the intended effect. Crosby spent a lot of time leaning over the boards yapping back at the Capitals’ bench and looking for a pound of flesh when he was on the ice. The Caps turned Crosby into Matt Cooke. They’ll take that ten games out of ten.

-- Did John Erskine take an online class or pick up a “Defensemen for Dummies” book at Amazon? He’s looked more and more like a solid, reliable defenseman as time has gone by this year. It’s not even as much that his minutes and matchups have to be managed as much as in the past. He’s just playing pretty well.

-- Eric Fehr didn’t attempt a shot on goal – not something you want to see from a guy who has been scoring points pretty regularly these days, but it didn’t hurt his hustle in forechecking.

-- We were wondering how Pittsburgh’s power play could be so bad this year. We’re not wondering any more. They’re too cute. Gonchar will bomb from the blue line (he scored that way), which is in his job description under “power play,” but the other guys? Color us unimpressed, at least today.

-- There are days when the Caps have faceoff problems (-cough- Backstrom) that is a lack of skill in the middle. Not today. Backstrom did a pretty good job of winning draws or fighting to a draw, but the Caps at times just didn’t support the play very well. And, although Backstrom will record this as another sub.500 effort in the circle, he was a combined 4-for-6 in the offensive and defensive zones.

-- Getting off on the right foot… that is 12 consecutive games in which the Caps have scored a first period goal. They have 20 goals in that span and have gone 8-2-2.

-- Eight wingers for the Penguins (including Evgeni Malkin, who started at right wing) had 11 shots, total. Petr Sykora had five of those, and none other had more than one (including Malkin).

-- The Penguins are trying to play a much more “north-south” game under Bylsma than they seemed to play under Michel Therrien. We’re wondering, though, if they have the defensemen to do this. Hal Gill and Mark Eaton looked slow and out of place in this scheme. Kris Letang sat (again), and Alex Gologoski is in Wilkes-Barre. They seem better suited to what Bylsma wants to do offensively, but neither of them are especially sturdy in their own end. You have to think the Penguins will be moving a defenseman at some point.

-- Of course, Whitney might make that job easy with the way he’s playing. Before taking a puck to the face in the third period, he was a minus-2, took a penalty, and had three giveaways. Did he come back too soon from his injury, or has he been overrated?

-- We’ll give Petr Sykora credit. The wingers for the Penguins have been a much-maligned bunch. But Sykora was out there launching shots to try to get something going. Twice he had excellent chances on rebounds offered up by Theodore, but had the puck bounce over his stick each time with an open net staring at him.

-- Question…If Sidney Crosby is driving along I-95, does he get booed at toll booths, too? Washington, Philadelphia, New York. He’s not a popular guy.

As long as the Penguins have Crosby and Malkin, they will be dangerous, a team capable of beating any other – including the Capitals -- on any given night. But this afternoon, Crosby got his point, Malkin got his, Gonchar got a goal, and the Penguins got next to nothing from everyone else, plus a grisly game from their starting goalie – a microcosm of their season. Meanwhile, the Caps got five multi-point games, including such games from the guys who you expect to get them – Semin, Ovechkin, Backstrom – and a guy you don’t expect to get one (Morrisonn). They got a decent, if not spectacular, performance from their goalie, who got better as the game wore on – a microcosm of their season.

The Caps didn't get the crowd their wings, but it will be a busy time at a local pizza firm's stores tomorrow. As for the hockey, it was two teams going in opposite directions. We’re happy with the one the Caps are on. Great job boys…

Dude, LOVE the Hunter S. Thompson image... fear and loathing in the District! :)

Peerless: I love..LOVE ...LOVE the yippy, annoying dog image. It is dead nuts on target, Crosby was an annoying inconsequential little B today. The only way he could have been a more embarrassing jerk would have been to punch someone below the belt. Boy am I glad he's never done that else the NHL mught need a new poster boy. Oh wait he did do that...and the hit from behind on Ovie today as he left the ice...of course Ovie's "talk to the hand" and "bye, bye, little boy wave" was perfect too. Best thing is the Pens will never win with him as their leader and "I'm down wit' dat" How about you?
LETS GO CAPS!!!