We’ve reached the first ten-game milepost, and the Caps are on a path that will see them pass the 100-point mark for the second consecutive season and the sixth time in club history. In fact, the Caps are on pace to finish with 115 points, which would be another club record. But it is, as they say, “early.” How does the team stack up to where they were at this point last year?...

By these measures, the Caps are ahead of last year in every category. But here is what sets this year’s first ten games apart from last year’s. Last year, the Caps played five playoff teams and one division winner from the previous season – Pittsburgh – in the first ten-game segment. This year, the Caps played six playoff teams and four division winners from the 2008-2009 season in their first seven games. They went 3-2-2 in those first seven games on their way to the 6-2-2 start. Better record against stiffer competition, better overall numbers – it would be hard to find fault with that.

How do these comparisons work when we go to the individual level? Let’s look at the forwards first.

What a difference a year makes. At this time last year, Ovechkin was burdened with family concerns, and it was reflected in his start. Compare the numbers he put up last year with his start this year… 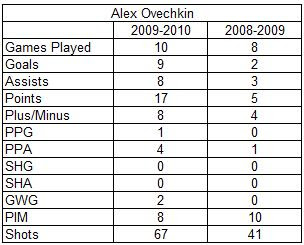 He is on a pace to set career records in goals (74), assists (66), points (140), plus/minus (+66), game-winning goals (16) and shots (549). But here is your odd Ovechkin number – two. He has two game-winning goals thus far this season. Last year, he didn’t record his second game-winner until December 16th. He still finished tied for third (10) for the season. This is a number worth following as much as his total goals. No player has had more than 15 game-winning goals since Michel Goulet in 1983-1984. 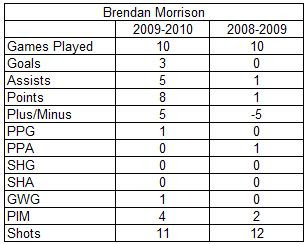 Last year, Morrison was coming off a season in which he missed 53 games, and it showed in a slow start. This year, he’s on a pace (66 points) to register his biggest points year since setting his career high in 2002-2003 (71).

Is Matt Bradley entering another phase of his career? Consider the comparison of last year’s first ten games to this year’s… 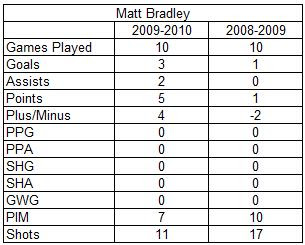 Including playoffs, Bradley has five goals in his last 20 games. That might not sound like much, but that is a pace of 21 goals over an 82-game season. Bradley has never had as many as 10 goals in a single regular season. Here is your Bradley number – one. And that’s a two-fer. He has one fighting major this season, a number than might seem low to Caps fans, given that enforcer Donald Brashear is gone, and the rough stuff is being handled by committee. The other part of this is that Bradley has only one minor penalty in eight games. He had only seven in 81 games last year.

Gordon has had a bit of a penalty problem to start this season. But it isn’t any different, in terms of minutes, than last year… 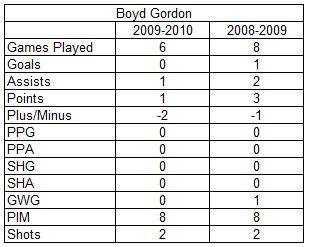 What makes this year’s minutes stand out is that of the four minors Gordon has taken, three of them have come in the third period, all of those in the last half of the period, and two of them resulted in power play goals for the opponents, one the game-tying goal by Scott Hartnell in a 6-5 overtime loss to Philadelphia, the other the game-winning goal by Marian Gaborik in a 4-3 loss to the Rangers. 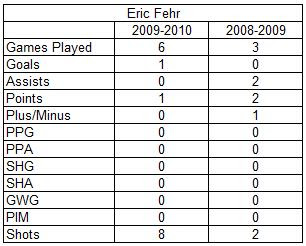 Fehr has battled injury throughout the professional phase of his career, and this year is no exception as he comes off surgery on both shoulders in the off season. He’s working his way back in, having registered fewer than ten minutes of ice time in four of the six games in which he’s played. That’s not a lot different from last year, when he played in fewer than ten minutes in each of the three games he played in out of the first ten. 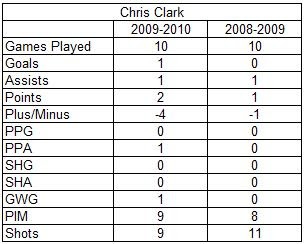 Except for this. Last year, Clark averaged about 13 and a half minutes of ice time in his first ten games. This year, he has topped that amount of ice time only once, his last time out against the Islanders. What is perhaps odd here is that Clark is averaging only five seconds of penalty killing time per game. But it isn’t odd in the context of the last few years. In his first two years with the Caps, Clark averaged 3:34 and 2:34 of penalty killing time per game. In his last three (including this), he’s averaged 25 seconds, three seconds, and this year five seconds.

Backstrom is off to a better start than last year… 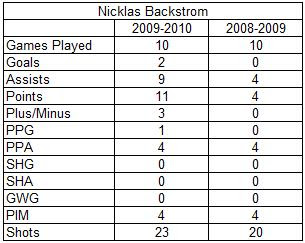 In fact, he’s off to a better start than his first two years, combined (0-9-9, minus-3). Here is the odd number for Backstrom – 14. He didn’t register his first even strength point until Game 14 last year. He had his first even strength point in Game 1 this year. If he improves his performance as the season goes on as he has done in each of his first two years, Backstrom could have a monster season. But where he’s struggling is in the faceoff circle. Here’s another Backstrom number – 87. That is his rank among faceoff leaders in the NHL on his 40.8 winning percentage. The irony there is that a player who wears that number has made himself into a very good faceoff man (Sidney Crosby ranks 8th in the league). Hopefully, Backstrom – only in his third season – can follow suit.

Aucoin played in a dozen games for the Caps last year, none of them in the first ten-game segment. But he has dressed for four games so far this year with a goal and an assist for his trouble. He’s managed to make a contribution with limited ice time – he hasn’t been on the ice for ten minutes in a game yet. Oddly enough, he’s tied for tenth in total scoring for the Caps so far.

18-37-53-?? That’s been the points progression for Laich the past three seasons. With nine points in ten games, he’s on a pace to top 70 points. That might not be a likely scenario, but he is off to a better start this year than last… 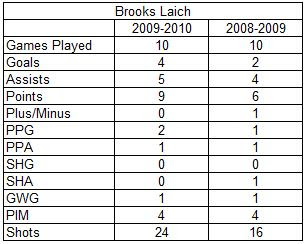 Laich has already had three multi-point games this year (he had 11 last year). With seven in his last 31 games last year, that’s 10 in 41 games. For a player who does not post a lot of assists (Backstrom, for example, has nine multi-assist games in his last 41), Laich seems to get his points in bunches.

Knuble has been shooting in a bit of bad luck with two goals in ten games so far. Compare that and his other numbers with last year’s production with Philadelphia… 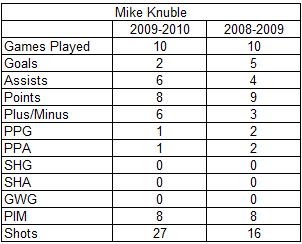 He’s managed to get points though, largely by doing what he was brought in to do, create traffic. His two goals were pretty much signature Knuble – they were scored from a total of 24 feet from the net. What he has been that folks might not have expected is a minutes eater in all situations – fifth in total ice time per game among forwards, fifth in power play ice time, sixth in penalty killing time, fourth at even strength. 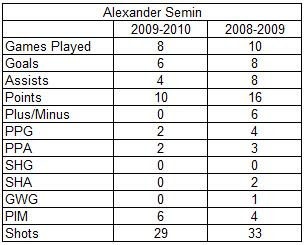 However, upon being moved off the Ovechkin line, his scoring tailed a bit, then he came down with an illness that has kept him out of the last two games. It’s worth noting that he had 16 shots on goal in his first four games (5-4-9), but only 13 – six of them in one game against the Sharks – in his last four (1-0-1). If there is a difference between last year and this so far, it is that special teams scoring. While Semin was 4-5-9 on special teams through ten games last year (including those two shorthanded assists), he is 2-2-4 so far this year.

Giroux played in a dozen games for the Caps last year, none in the first ten. He’s been up for two games so far this year while Semin get’s back to health. If there is a number that sticks out in two games so far, it is that – two. His ice time has been sparse (less than 15 minutes total in two games), but he has only two shots on goal (four attempts). He does have four hits, though (all against the Islanders in the last game).

Kane played in only one game for the Caps last year, again not in any of the first ten. He has dressed for three games thus far, and what might be odd about his brief stay so far is that he’s averaged about a minute more in ice time a game than has Giroux. Small sample size, different roles, etc., etc. We just thought we’d throw that out there.

We had Steckel scoring 12 goals this year in our season previews of players. That’s not looking too good at the moment and is behind his pace last year… 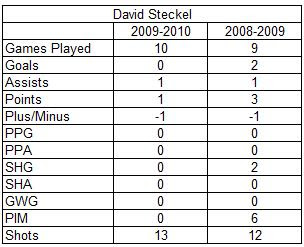 But those two goals happened to be his being the beneficiary of the two shorthanded assists supplied by Alexander Semin. What Steckel did well last year and continues to do well this year is take draws. He is seventh in the league in faceoffs so far, up to 60.6 percent on the winning side from 57.9 percent at the end of last year. It’s worth noting that the 60.6 percent (94 of 155) is up from 54.8 percent in the first ten games of last year (51 of 93).

Laing skated only once last season, not among the first ten games. For his trouble, he ended the evening with a lacerated spleen. His experience this year has been more pleasant and productive. He hasn’t yet recorded a point, but he does lead all wingers in penalty killing time. What might be odd about his first ten games is that he ranks only fourth among forwards in blocked shots, a skill for for which Laing has been known in his career to date.

We'll get around to the defense and the goaltenders shortly.

Email ThisBlogThis!Share to TwitterShare to FacebookShare to Pinterest
Labels: the tens 2009-2010