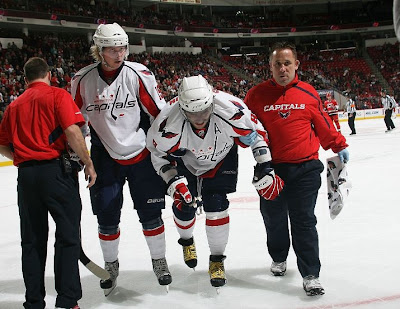 It is the worst picture Caps fans can conceive of, and not even a 3-2 win over the Carolina Hurricanes tonight can erase the image of Alex Ovechkin being helped off the ice on one leg after crumpling to the ice as a result of a knee-on-knee hit with Carolina’s Tim Gleason in the first period.

The injury to Ovechkin cast a dark cloud over some fine performances for the Caps tonight. To wit…

Nicklas Backstrom had a three-point night, his first multi-point night since November 7th and the most points he’s recorded in a game since a four-point night against Philadelphia on October 27th. He also won 12 of 23 draws and was not deemed guilty by the official scorer of a turnover.

Jose Theodore stopped 37 of the first 38 shots he faced and 38 of 40 overall to give his skaters some comfort and stability as they were dealing with Ovechkin’s absence. He single-handedly kept the Caps in it early as Carolina outshot the Caps 13-1 in the first 7:18, Theodore stopping 12 of them.

David Steckel… he’s still without a goal this season, but he had an interesting night, nevertheless. Steckel lost his first seven draws, then won 11 in a row before finishing 11-for-21. It was the 25th time in 27 tries that he finished a game with at least 50 percent wins on faceoffs.

- Think injuries are becoming a problem? The Caps’ top line at the end of the game was Tomas Fleischmann-Nicklas Backstrom-Alexandre Giroux.

- For Eric Fehr, it was the best of times and the worst of times. Fehr had a goal and an assist (that makes four goals in three games). He also took two high-sticking penalties in the third period (of four third period penalties the Caps took).

- How is Ovechkin’s absence felt? Here is one way – the Caps had only four shots on goal on five power plays. By way of comparison, Carolina had 12 shots on seven power plays.

- Alexandre “Chauncey Gardner” Giroux… less than ten minutes, plus-3, and an assist.

- Tim Gleason has a rather eventful night for Carolina. Not only was he the recipient of the Ovechkin knee, after he missed a couple of shifts he finished the night with four shots (seven attempts), four hits, three blocked shots, and two penalties (a misconduct and a minor). All that was missing was the partridge in the pear tree.

- Eric Staal had 17 shot attempts for Carolina (almost a third of the attempts the Caps had – 59), but only two in the last 14 minutes of the game (both in the last two minutes).

- Carolina was credited with 45 hits. Seven Hurricanes were credited with at least four. Stormy the Pig (described as a “furry ball of fun” on the ‘Canes’ web site) had eight of them… we think.

- Much as we liked Nicky’s performance tonight, Theodore was the number one star.

- Well, the Caps spread it around… seven players shared in the nine penalties (seven minors, a major, and a game misconduct).

- Satchel Paige once said (although he probably wasn’t the first), “don't look back, something may be gaining on you.” Well, Atlanta is now in fifth place in the conference, seven points behind Washington and Pittsburgh, and they have three games in hand on the Caps, four on the Penguins.

- Three teams from the Southeast are in the top-eight (Tampa Bay being the other one). Go figure.

- Tomas Flesichmann had a pair of layups on his stick tonight and could convert neither of them. You’d think he was playing for the Wizards.

- Attendance was officially recorded as 12,797 at the RBC Center. It looked on TV like a Caps game at Verizon Center… from say, 2006.

- December will be a bear. Eight of 13 games are on the road, including a western swing to Colorado, Vancouver, and Edmonton in the middle of the month, then out to San Jose to close the year.

All in all, if a Caps fan had to trade two points for a healthy Ovechkin, it would be the easiest choice in the history of earth. But for now, all Caps Nation can do is wait for the injury verdict, not to mention the league's for the kneeing penalty (although after the game, Tarik El-Bashir reported in the Washington Post seeing Ovechkin walking with a limp, but without brace or crutch). As of tonight, the Caps are without their first, sixth and seventh leading scorers (Ovechkin, Alexander Semin, and Mike Knuble). They are without two top-six defensemen (Tom Poti, Shaone Morrisonn). They are without two important penalty killers (Boyd Gordon, Quintin Laing). That is almost half of what would be the usual complement of skaters for the Caps.

Perhaps Thursday will be "Rock the Redshirt" night, as Ballard kabonged Vokoun right on the coconut after Kovalchuk tucked away his rebound.