The Peerless Prognosticator is ON THE AIR!!! -- Caps vs. Flyers, January 17th

“Brunch is a meal served between breakfast and lunch...”

I guess it does. It was just a figure of speech. Who are you, anyway?

“Vic E. Peedia. I'm something of a trivia nut…but back to this brunch thing, a ‘brunch’ is something a hockey fan might enjoy before an afternoon game.”

“In France it might be called, ‘le grand petit dejeuner...’”

“Although in Quebec, where I assume they play hockey, it might be called ‘dejeuner-buffet.’”

“Well, I just wanted to add that in Germany, it might be called ‘gabelfrühstück.’”

“Very good…but actually, the term ‘brunch’ has its origins in Great Britain, except New Yorkers seem to think the term originated there among newspaper reporters.”

This afternoon, Flyers head coach Peter Laviolette gets a do-over. After replacing John Stevens behind the Flyer bench on December 4th, Laviolette stepped behind the Philadelphia bench at Wachovia Center the next evening and watched in horror as the Caps scored seven goals in 35 minutes on their way to an 8-2 win over the Flyers.

Including that game, Laviolette is 10-9-2 as head coach of the Flyers. The near-.500 record belies something of a “then and now” ride for the orange and black since the switch. Laviolette started 2-7-1 in his first nine games, then went 8-2-1 in his last 11. In those last 11 games the Flyers have outscored their opponents 44-29 (4.0-2.6). Until getting shutout by (of all teams) the Toronto Maple Leafs on Thursday, the Flyers had scored at least four goals in five consecutive games. One underestimates them at their peril at the moment. Here is how the overall numbers stack up... 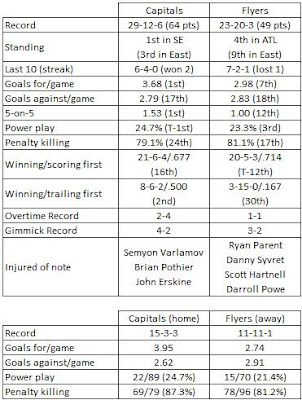 In the 8-2-1 stretch on which the Flyers find themselves, their scoring has come from the guys who have to do the heavy lifting. Captain Mike Richards is leading the way here with a 6-6-12 line over the last 11 games. After going 13-14-27 in his first 36 games of the season, one might say Richards has benefitted from the change behind the bench. He is 6-9-15 in 17 career games against the Caps and had a hat trick in the first meeting of the clubs this year, a 6-5 overtime win on October 6th.

At first blush Simon Gagne seems to have benefitted from the switch, too. In the last 11 games he is 5-7-12. But his situation is more a matter of health (It’s always a matter of health with Gagne – he’s missed 84 games over the past two-and-a-half seasons). Since returning to the lineup after missing 24 games to a hernia, he has been on quite a run. In 13 games since his return he has three multi-point games, including a hat trick 3-1-4 performance in a 6-0 win over the Rangers on December 30th. In 33 games against the Caps in his career Gagne is 17-16-33.

Someone has had to set things up for the Flyers, and leading in the helpers has been Chris Pronger over the last 11 games (1-9-10). Oddly enough, though, only two of those nine helpers have come on goals from either Richards or Gagne (both on Richards goals). The ten points in his last 11 games represents quite an improvement over the 5-17-22 he had in his first 35 games of the season. But what’s more, he is plus-10 in those 11 games to raise that number to plus-18 for the year. In 27 career games against the Caps he is 2-9-11.

In goal, Michael Leighton seems to have found cheese-steaks more to his liking than pork barbecue. In seven games with the Carolina Hurricanes to start the year, Leighton was 1-4-0, 4.28, .848. Since joining the Flyers after being claimed off waivers on December 15th, he is 8-1-1, 2.39, .921, and a shutout. But (there’s always a “but,” isn’t there?)… the bloom might be coming off the rose. In his last four games Leighton is 3-1-0, but other numbers have deteriorated somewhat – 2.75 GAA and a .902 save percentage --- and he’s allowed at least three goals in three of those games (he allowed as many as three only once in his first eight appearances with the Flyers). Leighton is 1-2-0, 3.07, .917 in three career games against Washington.

It could, however, be the return of Ray Emery in goal for Philadelphia. When last seen on a sheet of NHL ice, he gave up five goals on 17 shots in barely 31 minutes of work in that 8-2 loss to the Caps on December 5th. Then he had surgery to repair a tear in his abdominal wall. Perhaps it was his injury that accounted for his allowing 21 goals in the five appearances (getting pulled twice) before his surgery. Flyer fans are hoping so, because if it wasn’t the injury, and Leighton is falling back to earth, the Flyers’ playoff hopes lay in the balance.

No discussion of the Flyers should omit some discussion of the physical tradition they have built. And that is in conflict with at least the perception of Peter Laviolette’s preferences as a head coach. Well, Laviolette seems accommodating to the Flyers’ tradition of brandishing fists so far. In this 8-2-1 run the Flyers have had eight fights. Scott Hartnell – perhaps the one Flyer whose combination of playing ability and pugnacious character would make him fit right in with the 1975 Flyers – leads Philadelphia with three of those eight fights. He is 10-6-16 in 17 career games against the Caps, but he has seven of those goals in his last seven games against Washington.

1. Be a frontrunner. The Flyers have the worst record in the NHL when giving up the first goal on the road (3-15-0). They’ve won one game this year when trailing after two periods (1-14-0). In this 8-2-1 run they had ten consecutive games scoring the game’s first goal before being shut out by Toronto.

3. Have a bunch for brunch. OK, maybe it’s not technically “brunch,” but the term “bunch” certainly applies to the Caps lately. In their last 17 periods of regulation hockey the Caps scored two or more goals 11 times. Five times they scored at least three goals. Philly hasn’t been exactly immune to giving up the multiple goal period on this streak. Seven times in the last 18 periods they have done so. It’s one thing to have that happen against an Ottawa or a Toronto – two teams that did have multiple goal periods but rank in the lower half of the team scoring rankings. If that’s a problem against the Caps, one multiple goal period might not be the limit.

In the end, these are similar teams. Both can score, both have had issues in giving up goals. Both have potent power plays. But dig past this, and one sees that the Caps are the superior team as 5-on-5 play. And while both teams have had intermittent issues on the penalty kill, the Caps have the sixth best home penalty kill in the league (87.3 percent). But this game seems most likely to turn on what unfolds in the first period. The Caps have had comparatively sluggish first periods lately (eight goals in their last six games, their lowest scoring period overall). The Flyers don’t respond well to giving up early goals. Guess what we think will happen…