The Peerless Prognosticator is ON THE AIR!!! -- Caps vs. Bruins, April 11th

It’s Game 82 of the regular season., and it ends as it begins, with a game against the Boston Bruins. The Caps and B’s meeting a noon affair to bring the curtain down on the regular season, and these are two clubs with literally nothing to play for but the final statistics. Boston will finish sixth in the Eastern Conference and will play Buffalo or New Jersey in the first round. The Caps clinched everything around Valentine’s Day and will get either the Rangers (if they win today) or the Canadiens (if they don’t). Seems like just yesterday these teams were locking up in Game 1. Game 82 makes for a twinge of sadness, a reminder that another season is going by and…

I don’t understand, a “happy” number? As in “grin from ear to ear?”

“Let me explain… my name is Calvin Q. Lusse, professor of mathematics.”

“Anyway, here is how it works… First, take any positive integer ‘p’. Then, break it down into digits. Next, square the digits and add those squares. You get a new number ‘n’. If n = 1, then ‘p’ is a happy number. If it’s not, then set p = n and repeat the steps. If the process repeats forever, then ‘p’ is not a happy number.”

How long does this take?

Well, we don’t have that long, seeing as how today’s game is a noon start. The Caps and the Bruins played just six days ago, and not much has changed since we looked at that game.  Since the 3-2 overtime win for the Caps last Monday, both teams won the two games that followed in their respective schedules leading up to this season-ending matchup.  The overall numbers for the teams for the season look like this... 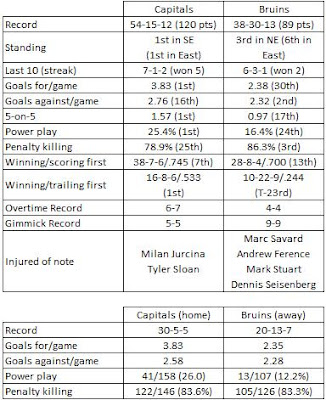 The Caps, however, lead the season series, three games to none, outscoring the Bruins 11-4 in the process. The Caps have been led in scoring in this series by Nicklas Backstrom (1-6-7, plus-4), who had a three-point night (1-2-3) in the last meeting of these teams last Monday. Overall Backstrom is 4-11-15 in 11 career games against the Bruins. Backstrom will enter this game having recorded three points in each of his last three games (3-6-9) and is 7-14-21, plus-7 in his last 13 games.

Backstrom might have the points lead in the season series, but Brooks Laich leads the Caps with four goals, including two game-winners (one in overtime last Monday). It’s worth noting that the four goals Laich scored in the three games came from an average of 15 feet from the net, a reflection of his willingness to go into traffic to get goals. Seems he takes to heart his own quote, that "if you want money, go to the bank. If you want bread, go to the bakery. If you want goals, go to the net." He has nine goals in 19 career games against the Bruins.

It might strike the Caps fan odd that in a series with 11 goals for the Caps, none have been scored by a defenseman. More to the point, Mike Green does not have a point in this series so far, and only one defenseman still with the team has points. Tom Poti is 0-3-3, plus-7 in the three games of this series. Maybe it is some karmic thing, seeing as how Poti was born in Worcester, about 50 miles outside of Boston. Poti is 2-14-16 in 29 career games against the Bruins.

If Semyon Varlamov gets the start against the Bruins, as it seems likely he will, it will be his first appearance against the Bruins. In fact, it will be his first appearance against the Bruins organization. He did not face Providence during his stay in the AHL, either. Although he got off to a slow re-start after the Olympic break (1-2-1, 3.41, .874), he has been much better in his last four appearances (2-1-1, 2.06, .913). Fun fact… Varlamov is the only goaltender on a non-original six team to have recorded a shutout before his 21st birthday. According to the Caps’ media guide, only three others have done it (Harry Lumley for Detroit, and Patrick Roy and Carey Price, both of Montreal).

The big winger has had something of a disappointing year (9-10-19, minus-7 in 49 games), but might be hitting a hot streak just in time. He is 1-2-3 in his last three games, and the modest three-game points streak he has is his longest of the season. Perhaps just as important, Lucic hasn’t been on the minus-side of the ledger in his last 11 games. A big hitter – and he is that (third on the team, despite missing more than 30 games) – can’t be getting hits at the expense of seeing goals scored when he is on the ice. Some advice to the operations folks at Verizon Center… hide the chocolate. According to the Bruins media guide, eating chocolate before a game is his hockey ritual.

Knuble can get to 30 goals for the season with a two-goal game against the Bruins. It isn’t out of the question (unless he is held out of the lineup); he has goals in each of his last two games. He has six multi-goal games this season, but none since March 4th. He is 8-8-16 in 23 career games against Boston, including a pair of goals in three games this season.

1. Keep the lights off. You can’t do worse against air than Boston has on its power play over the last month. They are 3-for-49 over their last 16 games and have failed to record a power play goal in 15 of those games. The Caps are 14-for-15 on the penalty kill over their last five games... probably no coincidence that they are 5-0-0 in those games.

2. tickticktickticktick… The Caps have played good “60 minutes” games against the Bruins, closing fact in all three games. In the first two they scored a total of five goals in the third period (to Boston’s one), and scored the winner in overtime in the other game. It will be especially hard to maintain focus for 60 minutes on a day like this, but if there is one team with less to play for than the Caps, it might be Boston. At least the Caps have the possibility of getting Alex Ovechkin a couple of league-leader finishes (points, goals).

3. Win. For what it’s worth, each of the last three Stanley Cup winners won their last regular season game. The last one not to win was Carolina, but Martin Gerber was in goal for that one (a 4-0 loss to Buffalo), and he didn’t make it through the first round as the Hurricanes’ netminder.

In the end, it’s hard what to make of this game. These teams could meet in the second round of the playoffs if the Bruins are the lowest seed to win in the first round. So you would have to reach a bit to think of this as a “statement” game. Boston remains a team finding it difficult to score and difficult to convert power plays (when they get them; they averaged barely three chances a game over their last 16 games). It’s hard to see the Bruins getting more than two, except by fluke. And it’s hard to see the Caps getting fewer than three, because it has happened only four times their 19 games since the Olympics. Sounds like how it will end up…