The Peerless Prognosticator is ON THE AIR!!! -- Eastern Conference Quarterfinals, Game 6: Capitals vs. Canadiens

And the only thing you need know about Game 6 is this. Nine times in Capitals history they lost Game 6 of a playoff series. They won none of those series. Six times it was the clinching loss, and on three other occasions the Caps went on to lose Game 7.

Now that we've told you the only thing you need to know, we'll give you a thousand or so more words on what you might think about in this game.  As the Caps prepare for Game 6, the good thing is that the Caps have won each of the last three Games 6 they have played – a 4-2 win against the Flyers in 2008 to force a Game 7, a 5-3 win over the Rangers last year to force a Game 7, and a 5-4 overtime win against the Penguins to force – again – a Game 7.  Win a fourth in a row, and there is no Game 7 to have to worry about.

The last time the Caps won a Game 6 to clinch a series was the 3-2 overtime win in Buffalo in 1998 to send the team to the Stanley Cup finals. The Caps also closed out Boston that year in the first round to advance to play Ottawa in the second round. There is something to be gained in thinking about that… the Caps closed out the B’s on the road, just as they will play the Montreal Canadiens tonight on the road. We just hope it doesn’t go to two overtimes the way that 1998 first round Game 6 did against the Bruins.

Tonight’s Game 6 might be the sort of game in which you expect the Young Guns – Alex Ovechkin, Alexander Semin, Nicklas Backstrom, and Mike Green – to shine. And in the three Games 6 win which this quartet played, they have largely done just that…

But that is six of the 14 goals scored by the Caps in the last three Games 6 played before this season. Is there a hint where the other goals might come from? Well, the departed Viktor Kozlov had three of the other eight goals, and Milan Jurcina (who is injured and will not play tonight) scored another, leaving four unaccounted for. Those four were scored by Tom Poti, Tomas Fleischmann, Brooks Laich, and David Steckel. Unless Boudreau includes Steckel as part of his possible lineup shakeup, he will not be on the ice at Bell Centre tonight. But there are Fleischmann and Laich, they of the 48 goals between them in the regular season (one in the playoffs) who can, and perhaps have to, come up big tonight.

Through five games, the results have had a certain predictability in them, despite the fact that the Caps didn’t close out the Canadiens by now. For example…

-- The Caps have averaged four goals a game, right in line with their 3.82 average during the regular season.

-- Against the vaunted Montreal power play the Caps are killing penalties at an 81.8 percent rate, slightly better than their 78.8 percent rate for the regular season.

-- Allowing 2.80 goals a game, the Caps are right there compared to their regular season average of 2.77 during the regular season.

In the big things (well, almost all of them), the Caps are performing in a manner consistent with their regular season performance. But two things are getting in their way – a number and a trend.

First, to the number. The power play, to use Bruce Boudreau’s term, “sucks.” At 4.2 percent (1-for-24), the Caps are 14th among 16 playoff teams. What is particularly aggravating about this statistic is that it is probably the single reason why this series is still going on. In the two one-goal losses the Caps are a combined 0-for-9 on the man advantage. Looking at the power play overall, they are not getting shots. In 24 power plays so far, the Caps have a total of 37 shots on goal. What’s more, they are not getting power play shots from players who need to take them. Alex Ovechkin has three shots on goal with the man advantage (one goal, and that was scored from the doorstep). Nicklas Backstrom, likewise, three shots. Brooks Laich, one shot on goal on the power play (none in the last four games). These three players combined for 36 power play goals in the regular season, almost half the Capitals’ league-leading total (79).

The good news on the power play is that there has been a consistent improvement in shots on goal over Games 2-4, ending with 11 shots on goal in Game 5. But even here, there weren’t a lot of quality chances. The power play shot chart indicates that five of the 11 shots came from what might be called “scoring areas,” while the others were the result of being pushed far to the outside for shooting opportunities (courtesy of the Washington Post interactive shot chart)… 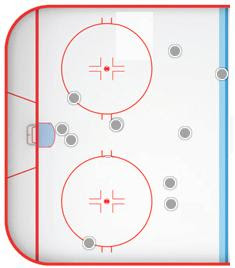 The other thing is a trend, and that one is more ominous for the Caps. The Caps dominated the latter part of Game 2 and had flurries in Games 3 and 4 to win three games by a combined score of 17-9. The Canadiens got an overtime goal in Game 1 and held on for 50 minutes after getting a couple of early goals in Game 5 to snatch a couple of one-goal wins. To sports fans, there might be an uncomfortable parallel that does not come from hockey. Pardon us our Stan Fischler “back in my day when dinosaurs roamed the earth” moment, but in the 1960 World Series, the New York Yankees won three games by pummeling the Pittsburgh Pirates 38-3 (that’s not a typo). They also lost three games by letting the Pirates hang around and getting outscored 14-8. That left things up to a Game 7, and the Pirates won the thing with the equivalent of an overtime game-winning goal, a bottom-of-the-ninth home run by Bill Mazeroski.

If a team lets an inferior opponent hang around long enough, strange things can happen, in a game or in a series. And keeping the Canadiens from hanging around for a Game 7 means getting the power play back on track and getting guys who have produced in a Game 6 setting to repeat their history. Of course, we think that will happen…

Peerless..please....help me come to grips with this

You should shake things up and pick them to lose game 7.