Looking at the Caps by the Tens: The First Ten Games

The Caps played their eleventh game of the season last night in Calgary, but we will take a brief look back at the first ten of the season and how the Caps performed in that segment.

Comparing the Caps 10-game record this year to that of last year provides the following: 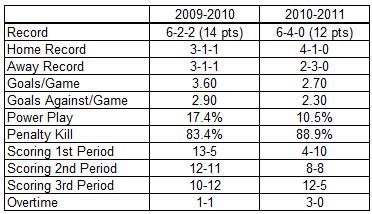 So far, the differences are like night and day, or perhaps more like the Fourth of July and Arbor Day. Last season the Caps had results that suggested a lot of end-to-end fireworks, a goals per game average that reflected a high-octane offense and a goals-allowed average that suggested swiss cheese as the apt simile. This year the first ten games were much more quiet at each end of the ice, the offense producing almost three-quarters of a goal less than last year, but the defense yielding almost half a goal per game less than last season.

In other respects the differences are significant – power play (down), penalty killing (up) – and reflect the scoring differences between this year and last over the same ten games. But the real difference here is how the Caps play the individual periods. Last season the Capitals got on teams early, outscoring them 13-5 in the first 20 minutes. The fact that they allowed 12 third period goals in the first ten games last season would appear to give credence to the idea that the Caps’ defense wasn’t so much bad as it was coasting with the benefit of late leads. However, compare wins and losses. For example, in four of the six wins the Caps recorded in the first ten games last season they had leads of two or more goals four times after two periods. In those games the Caps allowed six of the 12 total third period goals they allowed. But in the four games they lost (two in regulation, two in extra time) they allowed five third period goals. They were not exactly slamming the door in those games.

This season, though, the Caps are falling behind early and often. Ten goals were allowed in the first period of games, opponents scoring at least one first period goal in eight of those first ten games. And scoring only four goals themselves, the Caps found themselves behind the eight-ball after 20 minutes seven times in ten games, taking a lead into the first intermission only twice (arguably their two best games in the first ten – a 7-2 win over New Jersey and a 3-0 win over Carolina).

The flip side of this is that the Caps are doing a much better job of clamping down on teams late. The 13 goals they allowed in the second and third periods, and in overtime through the first ten games was barely half the number they allowed (24) through last season’s first ten.

The power play is clearly ailing, but it wasn’t as if last year’s version was gangbusters getting out of the gate. True, the 17.4 percent conversion rate last year’s power play posted after ten games is considerably better than the 10.5 percent recorded so far this season. But that 17.4 percent mark last year means that the Caps had a 26.6 percent conversion rate after those first ten last season. That the Caps are struggling with their efficiency is a cause for concern, not panic, especially in light of the performance last night in Calgary to kick off the second ten games. One thing that one might look at for improvement is getting those power play opportunities in the first place. Coincidentally, the Caps averaged almost precisely the number of power play opportunities in their first ten games (3.80) that they did all of last season (3.82). But whereas the Caps finished tied for tenth in opportunities last year, they ranked in the lower half of the standings in their first ten games so far.

The penalty kill has improved immensely with a change in focus. Last year’s passive maintain-the-box style that left them vulnerable to more energetic power play clubs has given way to a style that will pressure puck carriers at the slightest hesitation – fumbling a puck, turning their back on a defender, spending too much time looking for a pass. The early results have been pleasant. The Caps killed off the first 25 shorthanded situations they faced this season and have killed off 46 of 51 overall. However, the worrisome number on the penalty kill is this one – five. The Caps allowed five or more power play opportunities to the opposition five times in ten games and did so in each of the last three games in the first ten game segment (that number rose to four with last night’s game). While it is true that the Caps were 4-1-0 in games where they allowed five or more power play chances, three of those four wins required overtime. That might be a little too thin a margin to think comfortable as we go forward. It’s nice to have a penalty kill that can get the job done, better if you don’t have to use it too often.

The core of this club is well known to any Caps fan – Alex Ovechkin, Nicklas Backstrom, Alexander Semin, and Mike Green. The bulk of the offensive production is expected to come from this quartet. Well, their scoring was down quite substantially over the first ten games this year over the first ten last season:

Six fewer goals scored represents two-thirds of the total difference in goals between last year and this. A third of that drop in goal production represents, in part, the problems the Caps are having on the power play. Last year, these four players had a total of four power play goals after ten games. This year, they had two. But there are still the other four goals the Caps didn’t get this season that they got early last year. And it is that drop of four goals at even strength that more or less accounts for the drop in plus-minus from plus-14 in the first ten games last year to plus-11 this season for this foursome. All in all, they haven’t played badly, but neither have they jumped out of the gate.

The search for a reliable, consistent second line center continues. Tomas Fleischmann, Marcus Johansson, and Mathieu Perreault all had opportunities to grab the job by the throat, but for each the grip was weak. Combined, the trio went 4-4-8, plus-7, and that includes games in which some combination of the group played together, meaning that not all of this production was “second line” production. And this trio was brutal on faceoffs, not an insignificant responsibility for a center. Combined, this group went 75-for-193 (38.9 percent). Here is something perhaps worth keeping in mind. Of Alexander Semin’s five goals in the first ten games, only two involved assists from any of these three players (both from Mathieu Perreault). You might think that a credible second line center would have more assists given Semin’s skills in finding the net.

One area in which there has been improvement, at least in the numbers, has been in goaltending. Michal Neuvirth was 6-3-0, 2.17, .926 over the first ten games. Compare that to the numbers split between Jose Theodore (2-2-2, 2.55, .914) and Semyon Varlamov (4-0-0, 3.25, .884) last season. Neuvirth has on many nights been the Caps’ best player (he was one of the three stars in four of the Caps’ six wins in the first ten games). What’s more, he has kept the Caps in games early when the Caps have had difficulty getting any offensive production (four goals the first period in ten games). In the first ten games this season Neuvirth had a .902 save percentage in the first period of games, a .940 save percentage in the second, third, and overtime.

A team dresses 18 skaters a night. Through the first ten games the Caps dressed 24 skaters, and only 13 dressed for all ten games. Only four defensemen dressed for all 10 games. Even if one expected that John Erskine and Tyler Sloan would be splitting appearances at the number six spot, you would not have expected them to share the ice in eight of the ten contests. That was the result of Mike Green missing a pair of games and Tom Poti missing six games.

The Caps were 6-4-0 in the first ten. That’s the bottom line. The 12 points is not much removed from the ten-game total last year (6-2-2 for 14 points). It is a pace for 98 points; not the 121-point pace of last year, perhaps, but not chopped liver, either. Given the nicks and dents suffered so far, it isn’t an altogether bad place to be after ten games. But there are things to keep in mind as the Caps embark on their next ten. The power play needs to improve. Certainly the results against Calgary on Saturday were encouraging, but the Caps need to build on that.

If they are successful in that regard, it is likely to be reflected in better numbers for the Young Guns than those they put up in the first ten. You would like to see Mike Knuble shake loose, too. He hasn’t scored a goal since opening night.

In general the Caps need to get off to better starts. Yeah, they’re not out of any game with that offense, but getting outscored 10-4 in the first period generally is hard on the goalies and is no guarantee that the offense will wake up in the second and third periods.

The big problem going forward that might not be as fixable as the others is the second line center situation. Fleischmann, Perreault, and Johansson have not looked settled in that role, and it is at least an open question whether any of them will take a stronger hold on the position. How that situation unfolds will be among the more interesting things to watch as the Caps head forward to their next ten games.
Posted by The Peerless at 11:38 PM

Email ThisBlogThis!Share to TwitterShare to FacebookShare to Pinterest
Labels: the peerless prognosticator, the tens 2010-2011, Washington Capitals

Two comments - 98 points, as you mentioned, isn't chopped liver, but it isn't nearly what it used to be, either. It would have been fifth in the conference last year (13th overall). And, for comparison, 6th/T-11th the year before. It certainly doesn't suggest a team with (serious) Cup aspirations.

As for the power play, the Calgary game left me confused. The three scores brought the overall conversion rate up to about 1 in 6 (which I applaud). But the other power play was amazingly, heinously bad. Two 2-on-1 breaks and letting them set up an offense? No shorties, so it wasn't a total disaster, but man was it close to it.