A Defenseman Grows Up 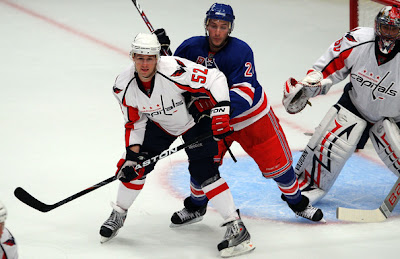 Mike Green is an “offensive” defenseman. These days, that is a term that seems to question one’s manhood as much as it identifies a defenseman’s style of play. As in, “Green doesn’t play defense.”

It is the narrative theme that probably cost Green a Norris Trophy in each of the last two seasons, his brand of play being less rugged and less “two-way” than the voting media seemed to want in their defensemen nowadays.

Green came to the Capitals as the 29th overall draft pick in the 2004 entry draft. Caps fans know by now that he was a steal at that position, having been the eighth defenseman picked in that draft. But that was as an “offensive” defenseman. And what an offensive defenseman he is. Of the entire Class of 2004, Green has recorded more points than any skater except for two classmates – Alexander Ovechkin and Evgeni Malkin. Not bad company, that.

But the knock on Green has been that he plays only at the offensive end of the ice. You probably could have made that argument when Green was playing in Canadian juniors, based on his statistics (34-113-147 in 168 games in his last three seasons with Saskatoon). And you might have made that case for his brief time in the AHL (12-49-61 in 77 games with Hershey, including playoffs). To date he is 75-156-231 in 330 regular season games in the NHL. Yeah, he does offense rather well.

But playing in one’s own end is perhaps the hardest talent to master in the NHL, especially for a defenseman. Moving the puck, blocking shots, tying up opponents, playing the wall and behind one’s own net. All involve decisions having to be made in the blink of an eye. And this doesn’t even include the decisions at the other end that have their defensive implications – when to step up, when to make that cross-ice pass, when to pinch. Make the wrong decision often, and your goaltender is facing a lot of 2-on-1 breaks.

But back to his own end. The big minutes eaters in the NHL among defensemen get so much ice time, in part, because they are out there killing penalties. Of the top-15 defensemen in average ice time last season, 10 of them skated at least 2:30 per game in a penalty-killing role. Ditto for the previous season, and of the ten that year, six skated more than 3:30 a game on the penalty kill.

Mike Green did not come into the league as a penalty killer, and it showed in his ice time. In his first three seasons, Green skated a total of 56:53 on the penalty kill, barely what he skates in total ice time over two games these days. That works out to an average of less than 20 seconds a game skating shorthanded in his first three seasons. It didn’t get a lot better in his next two seasons, as he failed to get a foothold in the top-100 in average shorthanded ice time. Here is how his first five seasons went and the neighbors he had in his ranking: 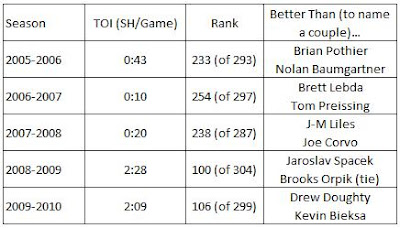 This year, things have changed. So far this season, Green ranks 48th in average shorthanded ice time (3:08/game), which is more than the likes of Duncan Keith or Zbynek Michalek. But more than the ice time numbers there is this. In the 13 games Green has played so far, the Caps have allowed seven power play goals. Green was on the ice for three of them, hardly an inordinate number given the ice time he is logging (second to Jeff Schultz in average shorthanded ice time). But in his absence for three games the Caps allowed three power play goals, all of them in a 4-1 loss in Boston on October 21st.  His presence makes a difference.

Green is still the big dog on F Street in terms of total ice time. He is sixth in the league in average total ice time and is skating almost four minutes more than second-place Jeff Schultz for the Caps. But the difference is this. His average ice time so far this year is precisely that which it was last year (25:28). But within that 25:28 average ice time number for this season he is skating less time at even strength (17:41 compared to 18:15 last season) and less time on the power play (4:39 compared to 5:03 last season). It is on the penalty kill, where he is skating almost exactly a minute of additional ice time a game, that is making up for the reductions elsewhere. And what is more, he is doing it effectively, if the Caps’ 87.0 percent penalty killing rate with Green in the lineup has any meaning.

And none of this added ice time on the penalty kill or improvement in effectiveness when skating shorthanded seems to have affected his offense. He is currently tied for ninth among defensemen in total points, although he has played in fewer games than any of the defensemen ahead of him. He is tied for third in goals scored, and he is tied for eighth in overall plus-minus. In his last seven games he is 4-6-10, plus-3. Although he was held off the score sheet last night, much of that might be attributed to his focus on the defensive end, where he was called upon to pay a lot of attention to the Tampa Bay Lightning’s Steven Stamkos (ice time for each by period, thanks to timeonice.com):

Stamkos had a goal (not on the power play), and Martin St. Louis did have two assists, but the Caps won the game, 6-3.

There are still more than 60 games this season left to play, and there will be a lot of twists and turns along the way. But based on early returns, if the voters for the Norris Trophy are going to deny Mike Green the hardware this time around, they are going to have to do so without the “but he doesn’t play defense” argument to justify it.
Posted by The Peerless at 9:57 AM

I humbly submit Nicklas Lidstrom as proof positive that a high scoring defenseman can also win several Norris trophies. I think Mike Green is headed in the right direction and has lots of great seasons left in him and will continue to make lots of Caps fans very happy. Of course that is just my personal opinion.

Without a doubt. Lidstrom was the standard for offensive production from a defenseman for quite a number of years, but he never had to endure the "can't play defense" part of the equation to the extent Green has. The "can't play defense" theme might be a proxy for his less-than-scintillating post season performances so far, but he seems to have had barbs cast his way about his defensive skills from just about the moment he stepped into the NHL.