The last full week of November is in the books, and here is how it went … 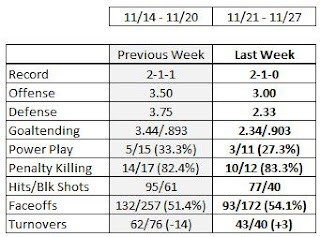 After riding over some bumpy road early this week that started late in the previous week, the Caps found their stride again to close the week. The 5-0 shutout loss to the New Jersey Devils on Monday was the Caps’ second 5-0 whitewashing in three games, and it had the potential to become a worse situation when after the game, during the press conference outside the Caps locker room, Alex Ovechkin, Alexander Semin, and the Devils’ Ilya Kovalchuk were close enough to coach Bruce Boudreau to raise his hackles a bit when one of the players could be heard laughing. While this stuff probably goes on in 30 of 30 rinks in the NHL, having it happen within the range of open microphones had the makings of an embarrassing situation for the Caps. What it did, though, was signal the low point of the season, from which the Caps rose to beat Carolina in Raleigh (3-2), then swatted away the upstart Tampa Bay Lightning back in D.C. (6-0).

If the average was somewhat low for the Caps, one had to like the progression – none, three, and six goals in the three games. This week it was the second period in which the Caps dominated. Yes, they were outscored 2-0 in the second period in the 5-0 loss to New Jersey, but they outscored Carolina, 1-0, and Tampa Bay by a 4-0 margin in the other two middle frames in the week. It was a bit of an odd week in that the Caps managed no goals on 30 shots against the Devils and only two goals on 38 shots against Carolina, but they torched Tampa Bay for half a dozen on only 29 shots in the third game of the week. Alex Ovechkin was the top point-getter of the week with five points, all of them coming on helpers. Alexander Semin led the Caps in goals, getting all three in his third hat trick of the season, this one in a 6-0 win over Tampa Bay. A couple of firsts this week – Brian Fahey registered his first NHL point with an assist in the Tampa win, and Marcus Johansson recorded his first multi-point game with a pair of assists in the Tampa win.

Again, it’s the progression – five, two, and no goals allowed. You get the sense, though, that they can be better. Allowing five goals to one of the least productive offenses in the league (and none of those goals coming off the stick of Ilya Kovalchuk) has to be disappointing. But to the Caps’ credit they clamped down hard on the Hurricanes and Lightning to close the week. They allowed only 45 shots combined in the last two games of the week, the second lowest two-game total of shots allowed so far this season.

The big story this week was the return of Semyon Varlamov to the nets. And a fine return he had, not that he had an especially high volume of shots to face. In the two games he played last week he faced a total of 49 shots, stopping 47 of them (.959). Although it has been interrupted by a lengthy (34-day) stretch on the shelf due to injury, his start is looking better than last year’s. In his first four appearances this season he is 2-1-0, 1.88, .928, with one shutout. In his first four appearances last season he was 3-0-0, 3.01, .895. What should not be lost in this week was a gutty performance by Braden Holtby to open the week. Not that he was good, he wasn’t. But he gritted it out, taking a shellacking for the team (five goals allowed on 23 shots faced) with Michal Neuvirth injured and Varlamov on the bench, but almost unavailable for play given that he was coming back from an injury and had just played two games in the previous two nights in Hershey.

One more time… the progression. No power play goals in the game last Monday against the Devils, one against Carolina, and two against Tampa Bay. Alexander Semin had two as part of his hat trick against Tampa Bay, but it was just as nice to see Brooks Laich get one against Carolina, breaking a seven game streak without an extra man goal. Hopefully it will spring him loose in that regard. The marker against the Hurricanes was Laich’s third power play goal of the year. He had 12 such goals last season. Overall the Caps recorded three power play goals on 22 shot attempts covering 11 power plays. The 11 power plays in three games is getting a little closer to the average number of opportunities per game the Caps had last season (3.82), but 3.67 for the week still leaves the Caps short of maximizing their potential, given the efficiency the power play unit continues to demonstrate.

A solid week from the Caps on the PK. They allowed a goal on the first power play they faced, the first goal in a 5-0 loss to New Jersey. After that they skated off 10 of 11. The success was earned, in part, by denying opportunities to opponents. In 12 power plays faced the Caps allowed only 12 shots on goal. The Caps also had five shorthanded shots on goal, all coming in the last two games of the week. The ability to make teams defend when on their own power play goes a long way to making for a successful penalty killing unit.

The Caps did even or better in all three games for the week. It allowed them to climb to 11th in the league in faceoffs and within another good week of jumping up several more places. It was a case of taking advantage of weak teams in the last two games of the week, Tampa Bay ranking in the lower half of the league standings and Carolina being the worst in the league on draws by a fairly wide margin (barely 40 percent as a team). It was nice having Boyd Gordon back to take draws, too. He was 20-for-29 for the week.

It was a lot better week in protecting the puck than the previous week’s minus-14. The Caps were even or better in each of the games. Noteworthy was the reduction in “unforced” turnovers – giveaways. The Caps had only 19 giveaways in three games last week, compared with 41 the week before in four games.

Two wins in a week might not seem like much, but if the Caps average that over the remainder of the season they will add 38 wins to the total of 16 with which they finished the week, tying last season’s franchise record-setting 54 wins. Laughter-gate seems to be shrinking in the rear-view mirror with the two wins to close the week.

Getting points from 11 players is approaching the sort of balance you would like to see over a stretch of games, and this past week’s scoring lines are impressive in that none of the nine goals were recorded by Alex Ovechkin, and three defensemen had goals, none of them named “Mike Green.” Green, in fact, did not record a point this past week. What it suggests is that even with the Caps scoring six on Tampa Bay, it is a team that has not yet really put it all together for a stretch of games. And for a team that is in the midst of a 9-2-2 month at the end of this past week, not to mention leading the league in standings points, the league should be on guard that the day is coming when the Caps do start putting it all together. For the teams having to face that Caps team, it will not be pleasant.
Posted by The Peerless at 2:21 AM

Email ThisBlogThis!Share to TwitterShare to FacebookShare to Pinterest
Labels: that was the week that was, the peerless prognosticator, Washington Capitals