The Peerless Prognosticator is ON THE AIR!!! -- Caps vs. Sharks February 17th


"Goals?"
Yeah… 13 of ‘em. All those flashing red lights… I felt like I was watching a crime scene.


“Well, that Anaheim goalie…his play was a crime.”
The Caps’ kiddie pair wasn’t much better… six goals on 21 shots? Ughhh…


"Cuz…ya know we got another game tonight to preview…."
UGHHHHHHH…

It’s another sunny day in California as the Caps complete their first set of back-to-backs inside of a week, tonight taking on the San Jose Sharks in a rematch of a battle between these teams only nine days ago. Since that 2-0 win over the Caps, the Sharks have split four games. In doing so they extended a trend Caps fans would be familiar with – an inability to score goals. Over their last six games heading into tonight’s contest with the Caps the Sharks have scored a total of 12 goals. Fortunately for the Sharks, they have allowed only seven goals in that span, getting two shut outs along the way in posting a 4-2-0 record. The overall numbers look like this… 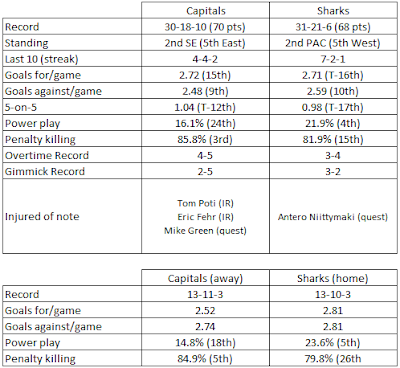 San Jose brings five 40-point scorers into this game, topped by Dany Heatley and Joe Thornton at 47 points apiece. Heatley is in his second season in San Jose, and while he has posted decent numbers (58 goals and 129 points in 140 games), he is not the efficient point producer he was in Ottawa, where he had a pair of 100-plus point seasons. But even with those seasons, Heatley has dropped in production to where he is about a point a game player. At the moment he is 1-3-4 in his last 11 games. In 31 career games against the Caps he is 11-23-34.

Marc-Edouard Vlasic gave indications early in his career that he might grow into something of an offensive defenseman. He had a 26-point season in his rookie year and followed that up two years later with a 6-30-36 scoring line. But over the past two seasons he has only 28 points in 122 games. The drop in points has been a product of a lack of helpers. He certainly has had his troubles lately getting points, failing to record a goal since December 18th, a span of 25 games. He is plus-2 over that same stretch, though. He is 1-1-2 in five career games against Washington.

Washington: Whoever gets the call in goal

After last night’s bizarre game, either of Semyon Varlamov or Michal Neuvirth have to shake off the poor effort (compounded by poor play in front of them) against Anaheim. Neuvirth has not allowed more than three goals in consecutive appearances this year; neither has Varlamov.


1. Don’t get happy. Seven goals is nice. But not when you’re in a game trading them with your opponent. San Jose is a different animal; resist the temptation to take shortcuts and cheat toward getting out of the zone early.

2. Focus! Last time these two teams met, it looked as if goalie Michal Neuvirth lost his edge a bit in the third period. He – or Semyon Varlamov – has to play 60 minutes, just like the skaters.

In the end, how do you follow up the journey into the Twilight Zone last night? Put it away and dig out the tape to watch over a few beers years from now, because this ain’t the 80’s, and teams aren’t going to be successful winning games 7-6. The Caps are still in search of that happy medium where they play responsibly, yet dynamically. The Caps are likely to face a better goaltender than what they faced last evening, and they need to be sure they are solid in their own end, too. A return to normalcy…sort of.

Medium is a happy thing isn't it? Thanks yet again, for making me laugh. I enjoyed the flashing red lights and crime scene silliness.
Let's see if Washington Capitals World starts getting toasted on both sides of the "Win Bread" evenly. It should be easy for Brooks Laich considering he goes to the "bakery" and all that.
GO CAPS