The Peerless Prognosticator is ON THE AIR!!! -- Caps vs. Rangers, February 25th

Hockey is back in DC after a two-week hiatus.

“The Caps went on recess? Did they play kick ball?”

Cheerless, you are as dumb as a box of rocks. Anyway, it’s hockey on a Friday night in…

“You know where the word ‘Friday’ came from, cuz?”

Oh, this oughtta be good.

You mean, the day is named for a Norse pagan god, “Frigg?”

Well, while Cheerless contemplates matters of religion and days of the week, we’ll comtemplate tonight’s game. The New York Rangers come to town, clinging to a playoff spot despite having had a difficult month of February. The Rangers are 3-6-1 for the month, but are 3-2-0 in their last five games. Overall, their numbers going into last night’s action looked like this… 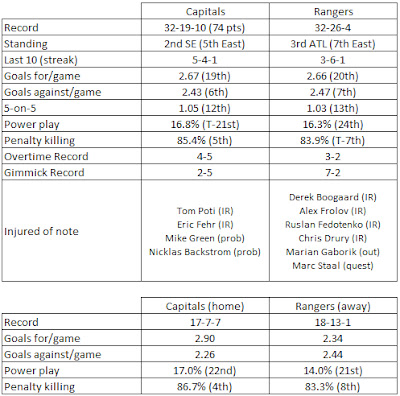 Looking at the numbers, the thing that jumps out from them is how much their profile resembles that of the Caps. Sixth and seventh in defense, 19th and 20th in scoring, 12th and 13th in 5-on-5 play, and so on. So why are the Caps sitting six points ahead of the Rangers? Well, even though the Rangers have ten extra time wins, it is their inability to get to that extra time that resulted in seven more losses in regulation for the Blueshirts, while the Caps managed six more points in extra time losses. It’s a rather thin margin.

And that could make for a close game tonight, even with the Rangers depleted by injuries to the likes of Ruslan Fedotenko, Chris Drury, and Marian Gaborik. Gaborik suffered a concussion, perhaps last Sunday against the Flyers, the latest in a series of injuries that has limited him to 47 games this season. His absence places more pressure on Rangers’ leading scorer Brandon Dubinsky (19-24-43 in 57 games), who comes into tonight’s game without a point in his last three contests after putting up a four-game points streak. One might be forgiven for thinking Dubinsky has been around for a long time, but he is still only 24 years old and in his fourth full season of play. In nine career games against the Caps he is 2-5-7.

Perhaps more important that Gaborik’s absence as a factor in tonight’s game is the possible absence of defenseman Marc Staal. He tweaked his knee against Carolina on Tuesday and did not practice with the team yesterday. He will be a game-time decision. Staal’s absence would be crippling. He is a minutes eater (almost 26 minutes a game), is one of the best shutdown defensemen in the league, and has added an offensive dimension to his game not present in his first couple of years. He is on a pace to finish with 30 points, which would be a career best, and finish plus-11, which would tie his career best. In the first three games of this season’s series with the Caps he has a goal and an assist and is a plus-2.

If you were asked, “who leads the Rangers in goals?,” your first inclination might be to respond, “Marian Gaborik.” Wrong. “OK, how about Dubinsky?” OK, he is, but only tied for the team lead. Know who the other player is? You’d stand there thinking a long time before you settled on Brian Boyle.

No, that was Brian Doyle Murray. Brian Boyle was a first round draft pick once upon a time (26th overall, to Los Angeles in 2003), but after spending four years with Boston College in the NCAA, he had a tough time breaking in with the Kings. After skating for only 32 games in Los Angeles over two seasons, he was traded to the Rangers in June 2009 for a third round pick in the 2010 draft. Not the sort of deal that gets a lot of attention. And last season he did not give anyone cause to pay much more attention, because despite playing in 71 games for the Rangers he finished with only four goals and a pair of assists, skating about 15 minutes a game. This year, it’s been much different. He was fast out of the gate, recording ten goals by the end of November. He has not been as hot since – nine goals in 36 games since December 1st – but with 19 goals for the season (four of them on the power play), it isn’t just his size (6’7”, 244) that makes one pay attention.

And that brings us to Henrik…Hank…or “Henny,” if you are Stan Fischler, “The Hockey Maven.” That would be Henrik Lundqvist. The Rangers’ netminder has not had a vintage season, wins and losses wise (winning only 24 of 48 decisions), but his 2.30 goals against average and .920 save percentage are both 11th in the league. He shares the top spot in shutouts with Boston’s Tim Thomas (seven). There have been cracks, though, appearing in Lundqvist’s game recently. Not big ones, but certainly enough to make one wonder if the minutes are taking their toll (he has played more than 4,100 minutes in each of the past four seasons and has more than 2,800 so far this season). Since blanking the Toronto Maple Leafs, 7-0, on January 19th, he has allowed three or more goals in nine of 11 decisions (4-6-1). He split two decisions against the Caps in this year’s season series, playing to a 2.02 goals against average in doing so.

If Marc Staal cannot answer the bell tonight, the job falls to Dan Girardi to take up a bigger load to shut down the Caps. He is the Rangers’ top point-getter from the blueline (3-22-25), but he will have to play better in his own end than the 72 goals against he has been on the ice for this season – about 47 percent of the Rangers’ total – suggests.

Ovechkin has looked much like his old self recently. In his last 15 games he is 9-8-17, plus-5, and he is on a four-game points streak, his longest since early November. He has power play goals in two of his last three games, which brings us to the point. He does not have a power play goal at Verizon Center this season. He has only 12 goals at home in 31 games. If he gets a goal or two, and especially if he gets one on a power play, it will be a big indicator that he is back.

1. Show up for 60 minutes…and maybe more. These two teams are among the league leaders in one-goal games played (32 for Washington, 31 for New York). These teams are likely to be hanging around one another all night…just so long as the Caps give a 60-minute effort…and maybe more.

2. Gather the wagons. The Rangers have outshot opponents 35 times in 62 games so far this season…and have a losing record in doing it (17 wins in 35 decisions). Keep those shots to the outside, and numbers won’t matter.

3. 60 minutes…part two. The Rangers have scored 39 first period goals this season, only one more than the 30th-ranked Caps in that measure. But they have scored 59 second period and 64 third-period goals (very similar to the Caps’ 61 and 60). They will be around at the finish. The Caps had better be, too.

In the end, these are teams that mirror one another quite closely in almost any number you care to use for comparison. Scoring, defense, special teams, the timing of the goals they score and allow. It’s like two cars speeding around a NASCAR track, one right on the tail of the other. And that is what will make playing a 60 minute game so important for the Caps. Sure, they would like to put on a show for the home folks after spending two weeks on the road, but this is the wrong team for that. The Rangers are not the kind of team that will play along in an up-and-down goal fest. This is one the Caps will have to earn the hard way.