Fans have been lamenting the Capitals’ power play for months now. After starting the season 21-for-87 (24.1 percent) in their first 24 games, the Caps are 17-for-144 since (11.8 percent), and in only one of the 46 games in that time have the Caps scored as many as two power play goals in a game.

Disappointing, to be sure. The Caps have probably left 6-10 points on the table as a result of poor power play results. But is it unusual in the context of the environment in which they play? Maybe not. There is an odd dynamic unfolding in the NHL this season with respect to special teams, and it has to do with the conference in which one plays. 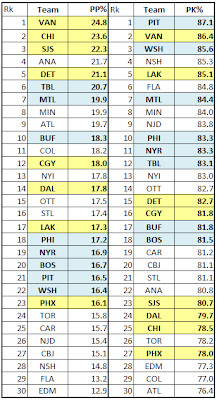 Out west, it seems having that strong power play is more consistent with success than having the effective penalty kill. Six of the top-eight teams in the West are in the top-half of the power play results to date, including four of the top five (It is worth noting that the top five power play teams overall play out west).

The reverse is true in the East. Six of the top-eight teams in the East find themselves in the top-half of the penalty killing rankings, including Washington – third at 85.6 percent. In the context of the Eastern Conference, one finds a number of top-eight teams that are strong on the penalty kill and weak on the power play – Washington (ranked 3rd and 22nd, respectively), Pittsburgh (1st/21st), Philadelphia (10th/18th), New York Rangers (11th/19th).

Sticking to the East, what I would be concerned about heading into the playoffs – where margins are quite thin between winning and losing – is the performance of the Montreal Canadiens. Ranked 7th in both penalty killing and the power play, the Canadiens have the capacity to make teams pay for their transgressions while fending off the results of their own. It will make Montreal once more a dangerous team lurking in the weeds of Eastern Conference standings.

As far as the Caps are concerned, if they can shake their three-plus-month power play blues in the last dozen games (they are 3-for-16 in March – 18.8 percent), it could give them a leg-up on their competition heading into the post season.
Posted by The Peerless at 2:01 PM

Isn't there a bit of the tail wagging the dog here? Western conference PK% can't be as high as the Eastern given the superior PP numbers there (or vice-versa).

The Eastern conference PP is 1.5 points worse than the Western conference, indicating that any team playing mostly Eastern opponents would have a better chance of having a higher PK percentage.

Because of the unbalanced schedule, you can't compare directly across conferences in that way.

But it is the intraconference number that is telling. In the East, successful teams have superior power plays. We didn't delve to deep into the numbers, but since most East teams play other East teams, that seems likely to be more an intraconference effect. In the West (playing, we supposed, predominantly Western teams) we see the opposite -- successful teams are ones that have successful power plays, which we presume is at the expense of other Western teams.