The Peerless Prognosticator is ON THE AIR!!! -- Caps vs. Blues, March 3rd

The Caps return to the Verizon Center ice tonight to host the St. Louis Blues in an effort to win their third game in a row and second in a row on home ice. The last time the Caps had a three-game winning streak was when they defeated the Pittsburgh Penguins on January 1st. The last time they won consecutive home games was at the end of November when they beat Tampa Bay and Carolina in the last two games of the month.

Tonight’s opponent is one that Caps fans don’t get a chance to see up close and personal very often. So here is a look at the Blues' numbers in comparison to those of the Caps... 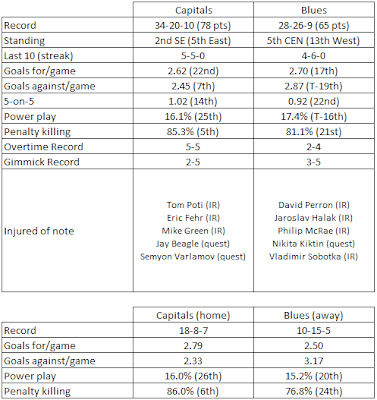 One player Caps fans would recognize, though, is goaltender Jaroslav Halak. You will remember him as the goalie for the Montreal Canadiens last year who stymied the Caps time and time again in the last three games of the opening series of the Stanley Cup playoffs, shaking off, well…the shakes, to lead the Habs to a stunning first round upset of the Presidents Trophy winners.

Well, guess what. He won’t be playing tonight. Cracked bone in his right hand. In his absence, St. Louis could offer up Ty Conklin. And if his recent performances are an indicator, tonight could represent the latest in a series of opportunities for the Caps to get their offense well. Over his last four appearances, Conklin is 0-2-2, 3.77, .848. He is 1-1-0, 3.06, .884 against the Caps for his career. He has not faced the Caps since he tended goal for Detroit in a 4-2- loss in Washington in January 2009.

Or Ben Bishop could get the call. The young goalie (24 years old) might be short on experience with 11 games on his resume, but he is long on being tall. At 6’7, he is the tallest goalie to have taken the ice so far this season in the NHL. Bishop has played well enough so far in his five appearances this year, posting a 2-3 record, but with a 2.60 GAA and .913 save percentage. Although he has only 11 games of NHL experience, one of those games came against Washington – a 4-2 Capitals win in Washington in December 2008.

As far as the skaters go, this is a team that gets reasonable balance in scoring with four 40-point scorers. One of them is Brad Boyes. Trouble is, he’s now in Buffalo, having been sent there on Monday for a second round pick. David Backes leads the three 40-pointers remaining (23-23-46), but he has been having his troubles getting on the score sheet lately. Over his last six games he is 1-0-1 and is a minus-2. In four career games against the Caps he has a pair of goals, including a game-winner.

Alexander Steen is tied with Backes for the team lead in scoring 17-29-46 and leads the Blues in game-winning goals (five). He hasn’t exactly been on fire lately, either, with only a pair of assists to show for his effort over his last six games. In 15 games played against the Caps over his career (most of it with the Toronto Maple Leafs), he is 3-4-7 with a plus-2.

With defensemen Eric Brewer and Erik Johnson shipped out on trade day (to Tampa Bay and Colorado, respectively), Alex Pietrangelo gets to shoulder more of the burden. He already leads the Blues’ defensemen in scoring (8-26-34, plus-11) and is getting bigger chunks of ice time lately. He has been over 24 minutes in three of his last five games, compared to a season average of 21:20 a game. He has faced the Caps only once in his career and has yet to register a point.

Berglund is the other 40-point getter for the Blues, and he is as close to a consistent goal scorer as the Blues have had lately (six in his last 13 games, nine in his last 19 games). On a team that has been shut out in its last two games, he needs to rekindle his goal scoring. In three games against the Caps in his career he is 1-0-1.

On November 28th, Alexander Semin staked the Caps to a 2-0 lead over the Carolina Hurricanes in what would end in a 3-2 shootout win at Verizon Center. That, folks, is the last goal Semin scored on home ice so far this season. Given his importance as an offensive threat, it is probably no coincidence that the Caps have struggled at home since then (6-7-6). Whether the reason is injury, the lack of productive linemates, sunspots, whatever…Semin needs to show the fans at home some love.


1. Forget where they play. The Caps are 4-8-1 against Western Conference teams this season (although they are 2-0-0 against the Central Division). Just remember, the West is part of the NHL, too, and this game does count in the standings.

2. Don’t squander good fortune. Perhaps the Caps get a break with Halak highly unlikely to play in this game. That is no occasion to let up, just because they are likely to face Ty Conklin or Ben Bishop. Letting down in the face of a perceived weaker opponent is something at which the Caps have become entirely too accomplished this season. Knock it off!

3. 3rd period fireworks. St. Louis has an interesting record in the first two periods of games – 52 goals for/51 against in the first period, 62 goals for/62 goals against in the second. But in the third? 54 goals for/64 goals against. The Blues lose too many games late. They are 25th in winning percentage when trailing after two periods, suggesting they just let games get away from them after holding teams close after 40 minutes.

In the end, it’s another game against – let’s face it – a club the Caps should beat, but will probably be left to hang around to make things altogether too interesting at the end. All the hints are there – a Western Conference team (yawn)…a 13th place team (ho-hum)…a weeknight game with no buzz (zzzzz…). We come to half-expect the Caps to sleep-walk through such games. This is the kind of game the injection of some new personnel might provide some spark for. We’ll see.