The Peerless Prognosticator is ON THE AIR!!! -- Capitals at Red Wings: March 16th

The Washington Capitals, fresh off their 4-2 win over Montreal last night, head to the Motor City to visit the Detroit Red Wings in the back half of this first back-to-back of the six game road trip.

The Caps are catching the Red Wings in a bit of a slump. The Red Wings are 4-4-2 in their last ten games and losers of four of their last six contests. Over the last ten games, Detroit has been outscored by their opponents by a 29-27 margin, and their special teams have kept the Red Wings afloat. The power play has been superb, converting nine of 39 chances (23.1 percent) in the ten games, while the penalty killers skated off 31 of 35 shorthanded situations (88.6 percent). Overall, the numbers compared to the Caps look like this: 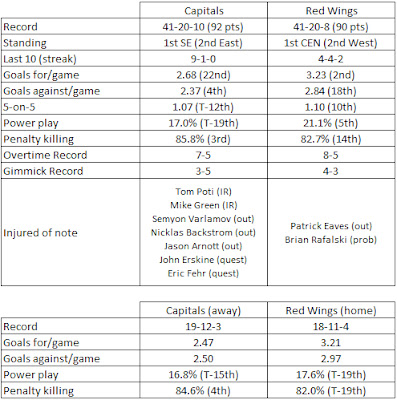 Among those 20-goal scorers, none might be more surprising than Danny Cleary. With 22 goals in only 55 games, Cleary already has a career high, and his 39 points is closing in on a personal best in total scoring (42 points in 2007-2008). He has hit a bump in the road lately, though, having not scored a goal in six games and having only one goal in his last nine contests. And not scoring has come with goals being scored with Cleary on the ice – over his last nine games he is a minus-7. In eight career games against the Caps he is 1-1-2.

Another of those ten-goal, 30-point players who might not show up on the radar is Darren Helm (11-19-30, plus-10, and one of only five Wings to have played in every game this season). Known primarily for his speed – he is among the fastest skaters in the NHL (called the “Energizer Bunny by coach Mike Babcock and “Usain Bolt on ice” in the Detroit locker room) – Helm has added a flair for the dramatic goal to his repertoire. He has a pair of shorthanded goals this season and two game-winners among the 11 goals he has scored. Helm is coming into this game on something of a hot streak. He has goals in three of his last four games and is 4-2-6 (the two shorthanded goals – one a game-winner – included) in his last seven games.

On defense, the Red Wings have enjoyed comparatively good health. Only eight defensemen have had to dress for the Red Wings this season, and seven of them have at least 50 games played on their season record. But Brian Rafalski has been nursing a bad back (he is expected to play tonight). Otherwise, the names are, for the most part, familiar. Nicklas Lidstrom, Niklas Kronwall, Brad Stuart. One name that might not be familiar, at least in a Red Wing sweater, is that of Ruslan Sulei. The veteran of 909 NHL games has only 67 of them played in this, his first season in a Red Wing sweater. He has contributed solid minutes (more than 18 a game) and is one of six defensemen with at least ten points for Detroit. But offense is not what he is there for – he averaged 0.71 shots on goal over his last 14 games, finding the back of the net once, that coming in his last game on Saturday in a 5-3 win over the St. Louis Blues. Sulei is there to provide some stability on the second or third pair, as needed, and could be an important cog in keeping the Caps from getting the sort of secondary scoring they need to have.

For better or worse, Jimmy Howard is the man in goal for the Red Wings. At the moment Howard is tied for the lead in wins among NHL goaltenders (33), although his 2.77 goals against average (34th) and .908 save percentage (tied for 29th) suggest he is as much the beneficiary of a powerful Red Wing offense (2nd in the league) as he has been dependably effective in goal. As the Red Wings offense has slipped just a touch over the last ten games (3-3-2 in the eight games in which Howard played), if scoring 3.00 goals a game in the games Howard appeared in can be called “slipping,” Howard has not ramped up his game. Along with that 3-3-2 record his GAA and save percentage (2.83, .909) are almost identical to his season average. With the Caps having averaged 3.00 goals per game on their nine-game winning streak (and with 14 goals in their last four games), Howard might have to be more of a difference-maker.

Well, it’s time. After 71 games we are getting to the nub of it – who is the Washington number on goaltender? Michal Neuvirth is almost certainly going to be that guy. We say “almost,” because we can’t crawl inside Bruce Boudreau’s head and figure out what he is going to do. But with 11 games left and some playoff-caliber competition coming up for the Caps, it might be time to get Neuvirth in a playoff frame of mind. This will be an interesting test for the youngster – a tough team, on the road, and in fact a team he has never faced in a building in which he has never played.


1. You are getting sleeeeeeepy… The Red Wings are a decent first period team. Their 64 goals scored ranks fifth in the league, but they have allowed 71 goals in the first frame, fourth most in the league. But they outscore their opponents 159-125 in the second and third periods, and overtime. Those 159 goals after the first period are more than New Jersey or Ottawa have scored all season. OK, that might not be the best comparison, but the plus-34 – about a half a goal a game – is worth noting. Teams might get lulled to sleep with first period success.

2. Will versus skill. This could be a contest of wills. In what is something of a reversal of roles, it is the Red Wings that are more of the run-and-gun sort (2nd in scoring, 18th in defense), while the Caps are the more reserved, button-downed team (22nd in scoring, 4th in defense). The team that dictates style – the one that imposes its will on the other – is the one that wins.

3. PP + S = W. You would expect goaltenders to have save percentages when facing a power play to be lower than their save percentages at even strength or when they enjoy the power play. But Jimmy Howard’s .876 save percentage when facing the opponent’s power play is 21st in the league among goalies that have played in at least 20 games. If the Caps can get shots – a challenge for that power play, especially with Jason Arnott and Nicklas Backstrom out – Howard might give up a couple.  Power plays plus shots equals a win.

In the end, this is one of those “benchmark” games that serve as a basis to gauge just how far the Caps have come with their revamped philosophy or responsible hockey. The Red Wings can score, and the Caps defense and goaltending will be tested by a club that is the gold-standard in puck possession hockey. If the Caps come out of this with a win, especially of the two-goals-or-fewer allowed variety, you will know they are the real thing.