The Peerless Prognosticator is ON THE AIR!!! -- Caps vs. Panthers, April 6th

It seems like only yesterday that Corey Masisak wrote this of the Washington Capitals’ home opener against the New Jersey Devils:

“If the Washington Capitals' goal was to show that they're better than the team that lost in the first round of the playoffs last spring after winning the Presidents' Trophy, consider Saturday night's 7-2 win against the New Jersey Devils as ‘Mission Accomplished.’"

Forty home games later, the Caps are about to close their regular season at Verizon Center a very different team than the one that buried the Devils under an avalanche of goals back in October. And tonight the Caps take that different team to the ice to host the Florida Panthers as a team that has dialed back the “Showtime” offense in pursuit of a style that balances the ability to score – especially when falling behind – with defense and goaltending in such a way as to frustrate opponents into thinking, “these are the Washington Capitals, right?”

On the other hand, the Florida Panthers are mired in another in a series of forgettable seasons. Missing the playoffs for the tenth straight season, the Panthers are playing out the string. And they are looking mighty ugly in doing it. Florida is 0-5-3 in their last eight games, a run plagued by an incapacity to score goals. They have only 11 goals in these last eight games, only eight in their last seven, and they were shutout twice. Overall, their numbers compare to the Caps like this: 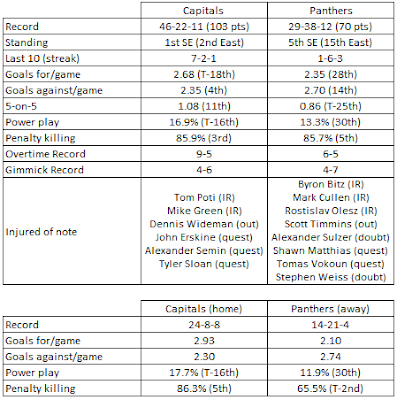 Stephen Weiss – the Panthers’ leading scorer – is doubtful for this contest with a groin injury. In fact, he’s doubtful for the rest of the season. And if he does sit out the last three games for the Panthers, the club will finish the season without a 50-point scorer (Weiss has 49 points).

In fact, Weiss might finish the season as the Panthers’ only 40-point scorer. David Booth is stuck on 39 points at the moment. And although he needs just a goal or an assist to reach that 40-point mark, it isn’t a certainty. He is 1-1-2, minus-9 in his last ten games. If there is a whiff of hope here, it is in that Booth has had a decent season series against the Caps this year. In four games he is 2-2-4. In 24 career games against the Caps he is 6-7-13.

It says something about the Panthers that of their top-ten point-getters, five of them now play for other teams. Dennis Wideman (fourth) is in Washington. Michael Frolik (sixth) is in Chicago. Chris Higgins (eighth) is in Vancouver. Cory Stillman (ninth) is in Carolina. Bryan McCabe (tenth) is in New York with the Rangers. The locker room must have a sign on it, “CLEARANCE: EVERYTHING MUST GO.” So it is left to guys like Mike Santorelli try and cobble together something – anything – on offense. Santorelli has a shot at 40 points himself, with an 18-20-38 scoring line coming into Florida’s last three games. But he, too, is finding the going tough lately. In his last eight games, only an assist is credited to his score sheet. He is a minus-8 in those games. In four career games against the Caps he is 3-1-4.

Wih Wideman in Washington and McCabe in New York, Dmitry Kulikov bears the scoring burden for the defense. He is a respectable 6-20-26, minus-3 in that regard, but he is struggling at the moment (as if any Panther isn’t) with only an assist in his last seven games and a minus-8 to go along with it. He has three assists in four games against the Caps this season and a plus-3 mark, adding to a career record of 1-6-7, plus-4 in nine career games against Washington.

Tomas Vokoun might be joining Stephen Weiss on the sideline for the rest of the season. He is suffering a back injury, and that might leave it up to Scott Clemmensen to tend goal for the Panthers. He has been in the nets for the last three Panther games. He has not performed at a high enough level to lift the Panthers out of their late-season funk. In those last three games he is 0-2-1, 2.92, .898. That goals against average and save percentage is considerably worse than his season marks (2.51, .915). He has enough skill that the Caps should not take him lightly, but like the rest of the Panthers, it seems, the season cannot end fast enough. He is 2-5-1, 3.79, .864 lifetime against the Caps.

Sergei Samsonov might be the closest thing Florida has to a “hot” player. In his last ten games he is 2-7-9, minus-1. He has Florida’s last game-winning goal, the first goal scored in a 4-0 win over Toronto on St. Patrick’s Day. The well-traveled Samsonov (Florida is his sixth team in his 13 NHL seasons) is essentially playing for a contract. He is in the last year of a three-year deal that pays him $2.8 million this year. How he finishes might influence that next contract he signs.

With Michal Neuvith having gotten the call last night, it would seem Varlamov would get the call tonight. And now Varlamov finds himself in a tricky situation. Neuvirth getting the nod last night – a game against a desperate team in a big venue – all but screamed that the Caps have settled on Neuvirth to start the playoffs. Varlamov will, for the third straight year, be the guy who needs to be ready in the blink of an eye (or after a soft goal) to go in and be sharp. He played that role for the last two years, both times coming in relief of a shaky Jose Theodore to lift the Caps. But he was the favorite coming into the season to be the number one goalie for the playoffs, and after a season-long audition for the role (one marred by injuries limiting him to fewer appearances (26) than Neuvirth has wins (27), he seems destined to start the playoffs for the third straight year on the bench, but this time under a different set of circumstances. With that knowledge (or at least the suggestion having been made with last night’s choice of goalie), will he be sharp tonight? Something to look for.


1. Pay attention. A game against a cellar-dweller the night after a game in Toronto. You can almost see the Caps’ eyes wandering around, thinking “can’t we just go to next week now?” If that’s how they play, Florida might get the odd goal or three to win. And remember, the Panthers do have two wins in four games of this series so far this season.