A recent Twitter exchange between CSN-Washington’s Alan May and NHL.com’s Corey Masisak about where defensemen John Carlson and P.K. Subban might finish in the Calder Trophy race got us to thinking about that question. The Calder Trophy winner is selected by the Professional Hockey Writers’ Association as “the most proficient in his first year of competition in the National Hockey League.” In the 77 times the Trophy has been awarded it has been won by a forward 51 times. This year, three forwards appear to be the front-runners for the award – Logan Couture of the San Jose Sharks, Jeff Skinner of the Carolina Hurricanes, and Michael Grabner of the New York Islanders. There are those who might make a case for goaltenders Corey Crawford of the Chicago Blackhawks, who has played in more than 50 games after the Marty Turco experiment was tried and found wanting. And perhaps others might include Philadelphia Flyer goaltender Sergei Bobrovsky, who has played in 50 games for the Eastern Conference’s leading team.

There seems to be no room at the table for defensemen this season. Not that members of this year’s rookie class of defensemen are unworthy of consideration, but the position does not lend itself well to the clean comparison of numbers that one can apply to forwards or goaltenders. A pity, because there are two defensemen who are in the midst of establishing themselves as stars for years to come – the ones that were the object of the exchange referenced above. And it begs the question, if there was a “Ray Bourque Trophy”* to honor the league’s top rookie defenseman, would the winner be John Carlson or P.K. Subban?

Oh, before you toss the names of Cam Fowler or Kevin Shattenkirk into the mix, we counter by noting that Fowler, despite being second among all rookie defensemen in scoring, plays almost no shorthanded time (22 seconds a game) and has by far the worst plus-minus among his fellow defensemen with the Anaheim Ducks. As for Shattenkirk, he leads all rookie defensemen in total points, but it is difficult to make him a leading candidate, having been traded this season from Colorado to St. Louis and who himself has logged next to no shorthanded ice time this season (25 seconds a game).

That leaves Carlson and Subban. Each has put up impressive numbers of their own: 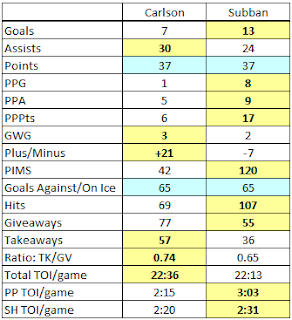 Points…identical. Goals against while on ice…ditto. Ice time…nearly so. Both get substantial special teams time. But the numbers also indicate that they are very different players.

Subban has more hits, more penalty minutes, more power play points. In Subban’s game the two sides of the coin are that on the one hand he is a more dynamic player than John Carlson, especially as a power play contributor (he leads all rookie defensemen in power play goals); but the other side of that coin is his being more mercurial. He can be prone to the big mistake that manifests itself in taking ill-timed penalties. Carlson’s numbers suggest a more consistent game on a night-to-night basis, stronger at even strength (second among all rookie defensemen in plus-minus) and a bit better in his turnover ratio; but the other side of that coin is that he does not have the game-changing dimension that Subban has at this point of their respective careers.

If you are looking for separation between these two, well, good luck. And it might not be found in their own numbers. On one hand, Subban has to play in a market where the spotlight is always on hockey and the Canadiens in particular. And much was expected of Subban in his rookie year, so that spotlight burns quite brightly on him. A lot of rookies might sag under the strain, but Subban has not. On the other hand, Montreal has the benefit of a rather experienced defensive corps around Subban. Growing up around graybeards such as Hall Gill and Roman Hamrlik (2,298 regular season games between them); plus later season acquisitions Paul Mara and Brent Sopel (another 1,386 regular season games) provides some relief from the burden Subban might otherwise have to bear.

Carlson does not play in the most rabid of hockey markets (with a nod to all those consecutive Verizon Center sellouts, it’s not Toronto or Montreal, or even Chicago or Detroit), but he has assumed a critical role by virtue of its diversity for a serious Stanley Cup contender. Carlson has had to grow up surrounded by injuries to Mike Green (30 games missed this season) and Tom Poti (58 games missed), and now will perhaps bear a bigger share of the burden with Dennis Wideman out indefinitely. And with the added responsibility and the ice time that comes with it (his average ice time has jumped by a minute over his season average in the 18 games since Mike Green last went out of the lineup), there have been the occasional rookie lapses.

If anything, both have picked up their games, and this time along a similar path. Carlson endured a month-long drought in January and February in which he was 0-3-3, even over a 13 game stretch. But since then he is 2-11-13, plus-7 over his last 17 games and has not skated fewer than 20 minutes in any of those games. Subban had a five-game point-less streak in February in which he also went minus-3, and he was riding a streak of 12 games in which he accumulated 31 minutes in penalties. But since then he is 6-6-12, even, in 19 games, during which he skated fewer than 20 minutes only once. These are not rookies being nursed into a role for their respective clubs; they are important cogs in their respective teams on a night-to-night basis.

This is a remarkably talented rookie class. There are a half-dozen or more legitimate contenders to be Calder Trophy finalists, and there are more than that who could become impact players in the years to come. Numbers aside, it would be hard to argue with an all-forward finalist group this season. But the closer race might be in deciding which rookie defenseman would win an award as best rookie for that position. Because in looking at the seasons that John Carlson and P.K. Subban have had, there doesn’t seem to be as much as a sliver of daylight between them.  Who would we pick?  Hey, there are three games left for each of them.  Let's not get hasty.

For what seems like 1/2 to 2/3 of the season Carlson and Alzner have regularly drawn the opposition's top line. I haven't watched the Habs (other than their games vs the Caps), so I don't know, is Subban going up against opposing teams top players? That might be one of those lesser known details that could tilt an otherwise even matchup.

Please tell me where you got the goals against stat? ty