Theme: Surprise is the greatest gift which life can grant us.
-- Boris Pasternak

Coming into the 2010-2011 season, Capitals defenseman John Erskine had never played in more than 60 games in one season, never more than 52 games in a season for one team. His career high in goals was two. He never recorded double digits in points, never took more than 50 shots on goal.

Well, wasn’t this year a nice surprise? Erskine – pigeon-holed as a “physical defenseman” of modest (by NHL standards) skills, who might have been penciled in as a 6/7 sort of defenseman for the Caps – finished the regular season having played 73 games (a career high), scoring four goals (another career high), recording seven assists (tying a career high) and 11 points (yup…career high), and had 58 shots on goal (ditto).

Oddly enough, perhaps, he did most of this offensive “damage” in the first half of the season, as his ten-game splits illustrate…

It would be damning with faint praise to say Erskine had a pretty good year, “given his talent level.” Uh, he’s an NHL player, which means he’s among the top couple hundred or so of his kind (job title, “hockey defenseman”) on the entire planet. Anyone reading this want to make that claim in their job? That said, the fact that Erskine had a career year in so many respects might be as much a product of players around him. By this we mean that the emergence of a John Carlson or a Karl Alzner allowed Erskine to remain more often within the confines of his productive comfort zone. 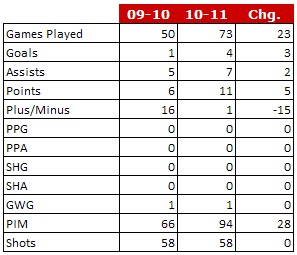 In fact, Erskine’s quality of competition ranked lowest among all nine Caps defensemen playing in at least 20 games. That has been true in the previous two seasons as well, and he was next to last in the 2007-2008 season. But with less ice time, the exposure to liability was not as great.

There is another set of considerations here with Erskine. Beyond numbers, it would be hard to name a Caps defenseman who gave his “A” effort on a more consistent basis. Indirectly, this might have been evidenced by his finishing with lower than a minus-2 only once in 73 games, and only twice this season did he finish consecutive games on the minus side of the ledger. OK, last year those occurrences were “never” and “once,” but last year the Caps steamrolled teams to the tune of better than a goal-per-game winning margin. This year, with the Caps playing games with much thinner average margins of victory, a defenseman with the alleged liabilities of an Erskine would have been harder to hide, or at least hide from the numbers. Erskine accounted well for himself.

Game to Remember… February 16, 2011. In a game in Anaheim against the Ducks, the home team was on the long end of a 5-4 puck fest late in the second period. With 3:13 left in the frame, the Ducks’ Andy Sutton boarded Matt Hendricks. Erskine jumped in to get his pound of flesh from Sutton. He was given an instigator, a fighting major, and a ten-minute misconduct for his trouble, although he did win the fight (and Sutton got his own “two and five” for boarding and fighting). The Caps would have to kill another penalty later in that period, but they came out smoking in the third, getting a goal from Mike Knuble on a breakaway in the first minute, then getting two more (to Anaheim’s one) while holding he Ducks to five third period shots in stealing a 7-6 win. Erskine did not skate another shift after that, but maybe he played his part in kicking the Caps up a notch for the third period.

Game to Forget… November 19, 2010. The Caps were on an 8-0-1 roll when they went to Atlanta to visit the Thrashers. The Caps had just beaten Atlanta, 6-4, only five days before. But the Caps stepped in a big steaming pile, and Erskine certainly didn’t step around it. In less than 14 minutes of work he was on the ice for three goals against (his season-worst minus-3 the result) and took a late elbowing penalty in a 5-0 loss.

Post Season… Not too good. Erskine was on ice for seven of the 24 goals scored against the Caps, which in and of itself is not necessarily bad (he was a plus-1 for the post season). But he was on the ice for five of the 16 goals scored against Washington in the second round series against Tampa Bay. Given his ice time and the matchups one would want to get, that’s a high number, especially since he was on the ice for three goals scored by Sean Bergenheim. Tampa’s forward had a Drucian post season (nine goals in 16 games, four of them against the Caps), and Erskine got to see much of it from entirely too close a vantage point.

In the end, the Caps got more out of John Erskine this season than perhaps fans might have expected. Erskine was on ice for 41 goals in 73 games (by way of comparison, Mike Green was on for 40 in 49 games). On ice for 0.56 goals/game, Erskine experienced a marked drop from his being on ice for 0.64 goals against in 2009-2010. Yes, that might be a reflection of the Caps shifting to a more defensive posture generally, but Erskine wasn’t a “weak link” in that change. The post-season revealed some problems, but we think Caps fans should be more pleased with John Erskine’s contribution in the regular season portion of the 2010-2011 season.

(Photo by Jim McIsaac/Getty Images North America)
Posted by The Peerless at 2:55 PM

What about the winter classic fight?