On Easter Sunday, 2003, the Washington Capitals lost Game 6 of the Eastern Conference Quarterfinal series against the Tampa Bay Lightning. Despite having committed considerable years and money to Jaromir Jagr and Robert Lang, despite having home grown players such as Peter Bondra (his ninth 30-goal season) and Olaf Kolzig (33 wins, a 2.40 GAA) still very productive players, the Caps once more found a way to snatch defeat from the jaws of victory. The loss was their fourth in a row in that series after winning the first two games.

And no one was happy at the result, least of all the man in charge, who vented at the fans (“I have to really reconsider the kind of commitment and investment I'm making with this team. I'm not a quitter. ... It was hard to see 14,000 fans.”), at building management (“I don't like the treatment that we're getting from the building. The party's over. To play back-to-back games on Passover and Easter Sunday does not help."), at the refs ("They made a cheap call on too many men on the ice that I don't understand. The third game really hurt us. The penalty on Olie [Kolzig] was the wrong call. Every game at home or every pivotal game was in the hands of the refs.”). It was an unhappiness that might have been uttered by any of those 14,000 fans in attendance or those watching on television.

And thus, the seeds of the remaking of the Washington Capitals were planted – the “rebuild.” By the following spring Jagr, Bondra, and Lang would be gone. The Caps would sink almost to the bottom of the league standings, ship off high-salary players for draft picks and prospects, suffer the growing pains of youth, and eventually rise again to become a playoff team.

We took a look at the rebuild in its “revisited” and “reloaded” versions. The rebuild might be done, but like a homeowner might do after having lived a while in a home, some renovations are in order. And that is what the Caps appear to have been doing this summer. There is already a “core” of players – those to whom the club has committed long term contracts or who might reasonably be receiving that commitment in the near future that has been some years in the making and some years in maturing.  And there is also a cohort of players that are the role players, the support players, the character actors that might or might not at some point become “core” players, but more likely are those players who have a window of opportunity with the Caps. It is a window that will close based on diminishing skills or increasing contract demands when their current deals expire, or perhaps as a product of their value as a trading asset to obtain more appropriate skills. Just as in a renovation one doesn’t tear up the foundation, one doesn’t tear up the core of the organization. The Caps have redone the kitchen, renovated the bath, remodeled the family room in a manner of speaking. Looking back at the “prebuild” and the “revisited” and “reloaded” phases of the rebuild, we have something that might look like this with respect to the roster… 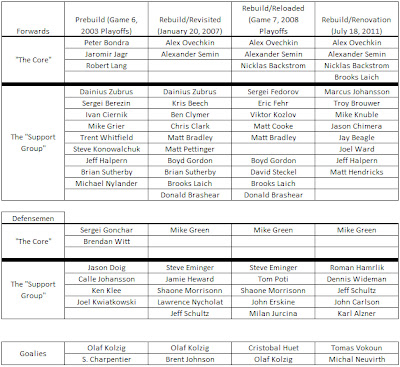 (click for larger version)
We are going to take a look at this in pieces, the first of which is “The core.” The obvious difference is that the core has become younger than that which existed in the "prebuild." In the “prebuild,” we defined the core as Jaromir Jagr (on a high-value/long-term contract), Robert Lang (same), Peter Bondra (an iconic home grown Capital still on a contract paying him $4,750,000), and Olaf Kolzig (another home-grown Cap still on a contract paying him $6,000,000 a year). Each member of this group had reached or passed the age of 30 (Bondra was the oldest, at 34, while Jagr was the youngest, at 30). And on defense, Sergei Gonchar and Brendan Witt might have been considered “core” players. Both were younger than their forward counterparts (28 and 27, respectively), but well into their respective careers, nevertheless (their ninth and eighth seasons, respectively).

Move forward through the revisited and reloaded phases of the rebuild and to the current version of the Caps. The old core was dissolved, and the new one expanded, as we define it, from the 2007 version that included Alex Ovechkin, Alexander Semin, and Mike Green (we would no longer include a 36-year old Olaf Kolzig in that group) to the 2008 version that would add Nicklas Backstrom, thus completing the “Young Guns” group.

Now, after four playoff appearances, the “core” group might also include Brooks Laich, who was signed to a six-year contract after this past season ended. Of these five players—Ovechkin, Backstrom, Semin, Green, and Laich – big things are now expected. And if one might be inclined to think that these five players are youngsters just entering their prime, the fact of the matter is that only Nicklas Backstrom will be younger than 25 on opening night of the 2011-2012 season. More to the point, this quintet now has more than 2,000 combined games of regular season experience (2,034, to be exact) and 184 games of playoff experience. Green is the only one of the five to have missed any of the 37 playoff games the Caps played over the past four seasons, and he missed but one.

However, each of these five players saw their individual numbers drop in the 2010-2011 season from the previous season (goals, assists, points, plus-minus): 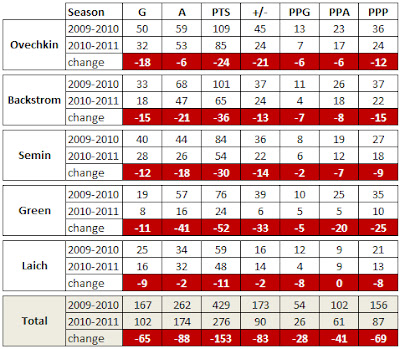 Not that individual numbers are the be-all and end-all of player performance, and there were instances of mitigating factors (Green missing 33 games, the Caps shifting their team emphasis from pressing offense to paying more attention to defensive matters). But combined, this group recorded 65 fewer goals than in the 2009-2010 season, accounting for almost 70 percent of the decrease in goals (94) scored from the 2009-2010 season. And while there are technical reasons (too many defensive zone starts for the top line, for example) that would help explain the drop, they don’t do enough to explain the decline in power play production. These five players saw their combined power play goals scored cut more than half, from 54 in 2009-2010 to 26 in 2010-2011. The drop of 28 power play goals explains almost all of the total drop of 33 power play goals from 2009-2010 to 2010-2011. Not surprising, since these five players led the Caps in power play time on ice in each of the past two seasons.

But as we said, individual numbers are not everything. They have to be the players who, either by example or by personality, have to lead this team to where they need to go. George McPhee was rather blunt about it recently in speaking of the “Young Guns”:

"They are difference-makers, and if they are really on top of their games and committed and playing well, then this team will have success. The message to them this summer has been, 'It is time for you guys to really take over. You're talented, you can be a difference-maker, but now it is time to lead. We've had guys like (Sergei) Fedorov in and (Jason) Arnott, but it is your turn. You're old enough, you're experienced enough now to really take over and lead.'"

How they perform individually – reflected in their numbers – will be an indicator of how well they might lead by example, but there will be other things to watch for. The degree to which other players – youngsters like John Carlson or Marcus Johansson – take their cues from how hard these core players work on and off the ice, the extent to which they play – and play well – when hurt (as opposed to “injured”), how they deal with adversity both on the ice (by ramping up their performance) and off (the degree to which they are accountable as leaders for the team’s performance).

George McPhee and his staff, with the personnel moves they made this summer, sent a strong signal to these players that the club has entered a new phase in its rebuild, a more urgent one. Signing a 35-year old Tomas Vokoun, a 37-year old Roman Hamrlik, and a 35-year old Jeff Halpern fairly shouts, “win now.” That is a signal that the core, years in building, is now experienced enough that they need to think of this as their team. They are a group that should no longer need the “training wheels” of leadership that a Fedorov or an Arnott provided. They are far enough along so that the team can add a player such as a Vokoun or a Halpern for a year as that last missing piece. It is a clear signal that all the building of the core is done – their time is now.
Posted by The Peerless at 7:51 AM

Terrific post. I agree completely. I'm glad to see McPhee spell it out for them in front of the whole class. We've all heard it now. I do think this will be their defining season collectively and individually. I hope they all pass with flying colors.

In the link to the full article, Bruce says of the "Young Guns": "I think we have to (be critical if needed), and I think it is going to happen. We'll see."

Bruce is no spring chicken either in terms of years with the big team. It's time Bruce is less wishy-washy with his key players. OV floated and floated much of last season and clearly nobody behind the bench criticized his play or helped him advance his game.