Are these things mutually exclusive? More to the point, with all this talk about whether Alex Ovechkin can or will score 50 goals this year or ever again, is that an important ingredient for winning a Stanley Cup?

History might be a guide here. Over the last 20 seasons, having a 50-goal scorer doesn’t seem to matter for much, but there is something else you might concern yourself about. Here is a look at the last 20 years of Stanley Cup finals, the winners, the runners-up, the top goal scorers (regular season), and the number of players with 10 or more goals scored in the regular season: 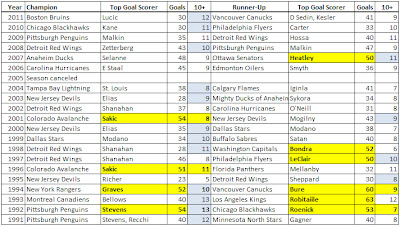 (click for larger picture)
Twenty years, and 20 champs had a total of four 50-goal scorers. Yes, most of that period is plagued by the “dead-puck” era, but note that the runners-up did have six 50-goal scorers. And since the lockout, when the rules allegedly opened-up the game for more offense (how’s that working out, kids?), no Cup winner has had a 50-goal scorer on their roster, and only one runner-up had one (Dany Heatley, with 50 in the 2006-2007 season). In fact, only half of the six Cup champs had 40-goal scorers.

Ah, but look at the columns for players with ten or more goals. Only once in 20 seasons did a Cup champion have fewer than eight 10-or-more goal scorers, and that was in the abbreviated 1994-1995 season, when the New Jersey Devils had five. You should also note that 16 times in 20 seasons the winning team in the Stanley Cup final had as many or more 10-or-more goal scorers on its team. The last four Cup champs had at least ten such players.

Which brings us to the Caps. Last season, the Caps finished the season with ten players with at least ten goals. Sounds pretty good, doesn’t it? Not so fast. Two of those players were trading deadline pick-ups (Jason Arnott and Dennis Wideman), one of which is no longer with the team (Arnott). Another – Eric Fehr – departed in free agency to Winnipeg.

So here we are. The Caps will return seven double-digit scorers who played the entire season with the club. You might pencil in a Mike Green to return to double digit goal-scoring, assuming he can stay healthy. But this is where guys like Joel Ward, Troy Brouwer, and Jeff Halpern become important. It was the missing element for the Caps in the playoffs last spring – that undercard scoring.

Perhaps one should pay less attention to the matter of whether Alex Ovechkin still has that 50-goal touch and pay heed to the musings of someone like Matt Hendricks.