Week Seven was better than Week Six, but these things are relative. At least the Caps won twice this week. But since their 7-0-0 start they are 5-9-1 in their last 15 games. To put that into perspective, the worst team in the league, the Columbus Blue Jackets, are 6-7-2 in their last 15 games. Right now, this is not a very good hockey team. 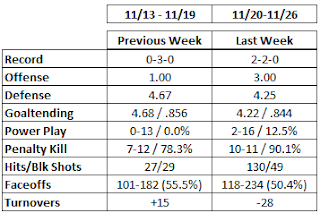 It is said that it’s not how you start, it’s how you finish. In other words, what have you done for us lately? And when you win the first two games of the week in barely get outta town fashion, then lose the last two by a combined 11-4 score, well…you didn’t finish the week very well. At the moment the Caps are on a pace for 93 points. If you are going to find a silver lining in that, it is that when the Caps went to their only Stanley Cup final, they finished the season with 92 standings points.

If you are looking to rationalize the 12 goals for the week as not so bad, you do it by convincing yourself that the Rangers, Coyotes, and Sabres are all top-half teams in the league’s goals-against rankings. But the guys who have to produce are not. With Mike Green still out, that means Nicklas Backstrom, Alex Ovechkin, and Alexander Semin have to contribute on a regular basis, and this week was middling at best. For the week, this trio was 4-5-9 in four games. When one remembers that Jason Chimera scored three goals by himself, this total is not all that impressive. And that is especially so when one considers that Nicklas Backstrom was 2-3-5 for the week, a very good points output. The Alexes?... 2-2-4. Not awful, not good. A whole lot of “meh.”

Awful. At the end of Week 2 the Caps had allowed 2.00 goals per game and were tied for the fifth best goals against per game in the league. As this week ends they are ranked 29th and have allowed 58 goals in their last 15 games (3.87/game). And here is the scary part. The 11 goals in consecutive games to end the week is the second time the Caps have done that in their last six games (they lost 4-1 and 7-1 decisions to Winnipeg and Toronto on November 17th and 19th). In their last 11 games they have allowed ten or more goals in consecutive games three times. The Caps had not allowed as many as ten goals in consecutive games since dropping a 3-2 decision to Colorado and a 7-0 decision to the New York Rangers last December. It is not as if teams are peppering the Caps with shots – 109 for the week. But 17 goals? That brings us to…

This was a communal suck for the week. Tomas Vokoun played in three of the games and allowed 11 goals on 76 shots (.855 save percentage). Michal Neuvirth allowed six goals on 33 shots in his only appearance for the week (.818), cementing his position as keeper of the baseball cap. When the week ended, Vokoun had four consecutive appearances with at least three goals allowed (seven of his last ten appearances), and Neuvirth had three of his own with at least three goals allowed (six of his eight appearances this season). Goaltending was not supposed to be a problem for this team. At the moment, it is.

It isn’t getting better, at least not much. This is a team that has not had more than one power play goal in a game since the last game of their 7-0-0 start. This week the Caps were 2-for-16. In 26 minutes and change of power play time they managed a total of 23 shots on goal. Alex Ovechkin had two of them in 14:25 of power play time. In 6:57 of power play time in three games, Alexander Semin did not have a shot on goal in the man advantage (that’s two weeks in a row without a power play shot on goal from Semin). What is worse, the Caps were outscored for the week on their own power play, allowing three shorthanded goals (one of those was a penalty shot). It did not matter a lot in the larger scheme of things – the Caps won the game in which they allowed two shorthanded goals and were already out of the game in which they allowed the third – but it was indicative a grisly week overall. As for the power play, though, does it all start with Mike Green? The Caps were 8-for-27 with him in those first seven games (29.6 percent), 6-for-59 since (10.2 percent). Here’s the thing. In those first seven games Green had three power play goals and was on the ice for each of the other five. Think it matters?

Hard to find a lot of fault here. Only 11 opportunities allowed; only once allowing more than two power play chances to opponents. And the Caps allowed only ten shots on goal in those 11 shorthanded situations in almost 16 minutes of shorthanded time. It was an especially welcome outcome after allowing three power play goals on five chances to Toronto to close the previous week.

Getting more than 30 hits in a game might be a product of scoring idiosyncracies, but averaging more than 30 over a four-game week was indicative of at least trying to engage physically. Almost a third of those hits, though, came from Troy Brouwer (25) and Alex Ovechkin (17). Brouwer had a 10-spot in about 19 minutes of ice time in the 4-3 win over Winnipeg on Wednesday. Ovechkin had eight in the 6-3 loss to the Rangers on Friday. On the blocked shots, Karl Alzner had seven for the week, but none in either of the last two games of the week. But it was Dennis Wideman who led the Caps with eight – one fewer than the number of goals he was on the ice for in the four games. He was on the ice for nine of the last 13 goals scored against the Caps for the week.

The Caps won 48 of 82 draws in the defensive zone (58.5 percent) and still allowed 17 goals. That’s how bad things were on defense this week. All in all, Jeff Halpern had the best week in the circle, winning 24 of 35 draws (68.6 percent). What that meant was that the rest of the team was not all that great. Of the other big three on faceoffs – Nicklas Backstrom, Brooks Laich, and Marcus Johansson – they were 85-for-174 (48.9 percent). But hey, they did win something this week. Let’s not be too picky.

The Caps lost every game and the week in this measure. They had 47 giveaways for the week, 30 more than they were charged with in the previous week. Almost a third of them were charged to Dennis Wideman (eight) and John Carlson (seven).

Two one-goal wins, two losses by at least three goals. It was not a good week for any individual or for the team. The losses are especially distressing. The two losses by three or more goals makes six in the last 14 games, four in the last six. Even in the eight game losing streak last season the Caps had only two losses of three or more goals. Five of the losses in that streak were of the one-goal variety, two of them in extra time. The Caps have now lost eight of their last 11 games, and only once did a loss come on a one-goal decision.

This week the Caps fell behind first in three of the four games and in fact gave up at least the first two goals each of those three games. It is the profile of a team that just is not playing well at all. At least in last year’s losing streak there was fight in the team, and they just were not being rewarded for effort. This team just does not have the look of one that cares very much at the moment. Last week we said that this was on the players, and we still believe that. But just as a coach sometimes pulls a goalie to send a message to the skaters, the coach might be “pulled” soon if the players can’t find their way out of this funk.

And this week does not provide a lot of promise in that regard. The Caps’ first opponent this week – St; Louis – has allowed more than two goals just once in 12 games in November. Pittsburgh, who visits on Thursday, is 3-0-1 since the return of Sidney Crosby (the loss came in overtime to St. Louis). Even Ottawa, the Caps’ opponent on Saturday, won three in a row before dropping decisions to Vancouver and the Penguins. They beat Carolina on Sunday.

With 60 games left, one would have to think the Caps will work this out at least well enough to secure a playoff spot. Right now, though, this is a team that doesn’t seem to be doing much right and seems to lack any urgency to correct their deficiencies. One would like to think that the low point was the last game, a 5-1 loss to the Buffalo Sabres in which five Caps were a minus-3 or worse, and Nicklas Backstrom and Alex Ovechkin were each a minus-4. Ovechkin had been as bad as a minus-4 only three times in his career before Saturday night (none since November 20, 2008), and Backstrom had recorded a minus-4 only once before (November 20, 2008). Both Ovechkin and Backstrom are minus-8 over their last 10 games.

In the end, over the last two weeks there is almost nothing anyone can point to and say, “this…this is what we can build on.” And that is a really bad place to be.

Hee-yeah…right.
Posted by The Peerless at 12:23 AM

Email ThisBlogThis!Share to TwitterShare to FacebookShare to Pinterest
Labels: Alex Ovechkin, Alexander Semin, Mike Green, nicklas backstrom, that was the week that was, the peerless prognosticator, Washington Capitals