The Peerless Prognosticator is ON THE AIR -- Game 27: Capitals at Senators

Didn’t we just do this? Well, we did, but that was in Washington. Wednesday’s matchup with the Ottawa Senators will be played at Scotiabank Place. It is a place that the Senators have not seen much lately, having played nine of their last ten games on the road. They went 4-3-2 in those nine games, no small reason why they are now on the inside looking out from the playoff-eligibles. Meanwhile, the Caps, who close out their mini-road trip, have lost their last five road games and have been outscored, 24-8, in doing it. No small reason why the Caps are on the outside looking in at the likes of Ottawa in the playoff-eligible top eight in the East. Not that it needs much updating, but here is how the two teams fall out in the numbers and rankings: 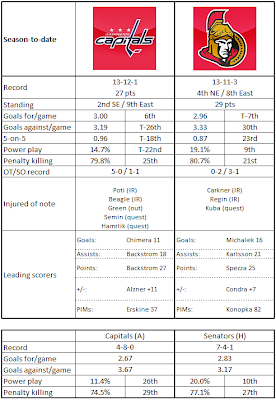 (click pic for larger image)
There is not much new to cover from our Saturday preview, but there are a few things to note…

2. The Senators have the fifth highest number of minor penalties taken this season, but they have been better lately about putting themselves down a man often. Over their last eight games they have faced 34 shorthanded situations (an average of 4.25/game) after facing 4.5 per game in their first 19 games. Still, they have the third highest number of shorthanded situations faced in the league.

5. Goaltender Craig Anderson has earned the decision in 14 of the last 15 games for Ottawa, including the 3-2 overtime loss to the Caps last Saturday. Given that Alex Auld is 3-6-1, 2.58, .903 against the Caps in 11 career appearances and has appeared in only one home game this season (he lasted 20 minutes and allowed four goals on ten shots in a 7-2 loss to Philadelphia), Anderson might make it 15 of 16.

1. There were reports that the Caps were practicing with a top line of Alex Ovechkin, Nicklas Backstrom, and Alexander Semin. Since November 1st, this trio is 13-16-29, minus-17, in 17 games. Backstrom has more than half the goals (seven) and more than half the points (15). That is maybe half to two thirds of what their production should be if you think of them as point a game players as a group.

3. Only four teams have fewer power play goals on the road than the Caps (five in 12 games).

4. Jason Chimera has seven goal in his last 13 games. That is almost one-fourth of all goals scored by the Caps in that span (29) and only one fewer than Ovechkin, Backstrom, and Semin combined over that stretch.

5. Marcus Johansson has three game-winning goals, the last of which came on October 22nd. He still leads the team in that category.

Jason Spezza would qualify as “hot” for the Senators at the moment, or as close to it as a Senator might be. In his last eight games he is 3-5-8, minus-1. He is also a point-a-game player over his career against Washington (9-19-28, plus-1, in 28 games). He had an assist in the last meeting of these teams, but he was on the ice for the last two goals scored by the Caps, including the overtime winner, a play on which he did not seem to be especially enthusiastic about getting back to defend the last rush.

One would think Vokoun would get the start in this one, despite the fact that he has a so-so record against Ottawa over his career (4-11-0, 3.21, .902 in 16 appearances). This game is the kind he is here for, to provide solid goaltending while the skaters figure out their issues at the other end of the ice. Although he took losses in each of his last two appearances, his stopping 61 of 65 shots (.938) should be enough most of the time to give the Caps a chance to win.

1. Score more. The four goals against Florida was encouraging on one level – it was the first time in seven games they scored more than three in regulation time and only the second time in 15 games they did so. On the other hand, they did it against a backup goaltender against whom they have had a lot of success in the past. They need to establish a more consistent scoring threat, and they need to get their big guns firing.

2. Allow fewer. The Caps have allowed three or more goals in eight of their last 11 games. Small wonder that they are 3-8-0 in those games. But they have done it only once in their last four games, so there is that. But that needs to be the norm, not the exception.

In the end, one can look at the last few games as roughly equivalent to “pre-season” in absorbing the principles of a new system. But these games count, and teams at the top of the standings are putting space between themselves and the Caps. Washington finds itself equidistant from first in the Southeast and last (seven points), and last in the Southeast at the moment is last in the conference. It is not a good place to be. They need to learn faster. Having already seen this opponent just a few days ago, tonight would be a good time to show what they have learned.