It might have been a good week. The Capitals had their opportunities – a big rival at home, a divisional rival on the road, and a chance to show they could go out west and knock down a Western Conference opponent. They ended up one-for-three. That does not make it a good week. 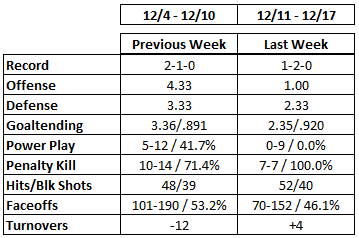 Ten weeks in, and the Caps have a total of four losing weeks. This one made four in the last eight. And again, the losing week ensured that the Caps did not have consecutive winning weeks since the first two full weeks of the season. They are now 4-5-0 under Dale Hunter. At this rate, they are going to be like the frog in the pot of water that is slowly and gently rising in temperature. The frog is oblivious to what is going on until in the end, it’s cooked. And so might this season be for the Caps unless they can find a way to jump out of that pot.

Three games, three goals. Very tidy, very neat. And very unsatisfactory. Try this on for size. The Caps had 86 shots on goal for the week; 24 of them were taken from outside of 50 feet. Another 20 were taken between 35 and 50 feet. More than half of the shots – and this was not a particularly high volume week – were taken from long range. There are basketball teams that might make a living making three-point shots, but in hockey shooting from that range is not a recipe for success. The goals, you ask? They were scored from 13 (Jeff Halpern), 36 (Alex Ovechkin), and 29 (Alexander Semin) feet. The Caps got next to nothing by way of “greasy” goals this week. Halpern’s was the only one that could qualify on that score, a put back from the side of the crease of a Dennis Wideman shot from outside. The Ovechkin and Semin goals were scored as “skill” goals – Ovechkin off a drop pass from Marcus Johansson, Semin off a rush down the right wing. If that is going to be their offense, there are a lot of one-goal games in the Caps’ future.

Here, the Caps actually had a good end to the week. There were the five goals hung on them by the Philadelphia Flyers, but that was more a case of iffy goaltending than poor defense. In the last two games of the week they held opponents to a combined shot total of 54. They did not allow a third period goal. We could say they did not relinquish a lead, but the total time the Caps led for the week was 1:14 – the time remaining when Alex Ovechkin scored the winning goal in the 1-0 win over Winnipeg. That might mean that the Caps allowed too many “first goals,” and they did allow the first goal in two of the three games. But one of those came more than 16 minutes into one game, the other came on a shot that goaltender Michal Neuvirth lost in the background at Pepsi Center. It would be hard to find a lot of fault with the defenders in either case, at least so far as a penchant for allowing early goals. But again, the second period is a problem. Four goals in all were scored on the Caps in the middle period. The 34 the Caps have allowed in the second period is the ninth most in the league.

Good and bad. Or more precisely, bad and good. Tomas Vokoun allowed four goals on 21 shots in 40 minutes of work for the week. Two of them – those by Scott Hartnell (top of the left wing circle) and Max Talbot (above the circles) in the Flyer game – would have to be considered “soft.” Michal Neuvirth finished up that game, allowing a deflection on the fourth shot he faced in the third period, then stopped the last eight shots he faced. Combined with his performance in the last two games, Neuvirth stopped 60 of the last 62 shots he faced for the week (.968 save percentage), one of them being that odd flutterer that he missed in Denver. Neither goaltender has been able grab the job and keep it for his own, but at the moment it is Neuvirth who is playing like (for lack of a better term) a number-one goaltender.

A week of 0-for-9 is bad enough, but 11 shots on goal in 16:14 of power play time? Three of those shots came from Dennis Wideman, the only Cap for the week with more than one shot on goal on the power play. One for Alex Ovechkin, one for Alexander Semin, one for Nicklas Backstrom, etc., etc. The Caps did not generate any follow-up. The guys one might expect to generate that follow-up – Brooks Laich and Mike Knuble – managed a combined one shot on goal (Laich) in a combined 16:17 of power play ice time.

Lost in the noise was the fact that the Caps not only had a perfect week on the penalty kill, they did not test that ability too often. Four straight games with four or fewer shorthanded situations faced; four straight perfect penalty killing. And in the four games the Caps allowed a total of nine goals...it goes hand in glove. This past week the Caps allowed only eight shots on seven power plays, and for the most part those shots did not come from shooters one would consider dangerous (Colorado’s Matt Duchene might be considered the most dangerous of the six opponents to record power play shots on goal). The Caps are now 13-7-0 when allowing four or fewer power play opportunities. They are, however, 5-7-0 in the last dozen instances of allowing four or fewer power play goals. Scoring only 25 goals in those 12 games probably hurt, too.

The Caps were outhit in two games and had fewer blocked shots in two games for the week (they might have made it 0-for-3 in blocked shots had they had many in the way of attempts against Colorado – they had only 47 in 60 minutes). Hitting and blocking shots has not been a hallmark of the Caps on the road so far this season. They are 27th in hits and 25th in blocked shots after 15 road contests.

They lost two of the three games for the week, but it was the Colorado game in which the Caps took it in the teeth (19-for-52/36.5 percent). For the week it was a tale of two zones. In the offensive zone the Caps were 31-for-57 (54.4 percent), but in the defensive zone were only 18-for-48 (37.5 percent). Two players had especially difficult times of it. Brooks Laich was 6-for-17 in defensive zone draws for the week (35.3 percent), not what you might be looking for in the defensive line center. Jeff Halpern found himself either losing draws to Paul Stastny late in the 2-1 loss to Colorado, or eventually getting tossed from the circle.

The Caps won the turnover battle in two of the three games and lost the other by only two. They were charged with only four giveaways in each of the last two games of the week. If the Caps had problems for the week, and with a 1-2-0 record and only three goals scored for the week, they did, hanging onto the puck was not among them.

There is a growing disconnect between the perception of the Caps and their performance. Folks might look at a team with Alex Ovechkin, Nicklas Backstrom, Alexander Semin, and even a Dennis Wideman and John Carlson on the back line and think it is a high-powered offense. The truth is, this is at the moment not a very productive offensive team. Twenty goals in eight games in December (2.50 per game) cannot be thought of as prolific. It barely registers as threatening.

The first line of Ovechkin, Semin, and Backstrom went 2-1-3, minus-3 for the week. As a group they recorded 23 shots on goal and 43 shot attempts.  Not terrible, but not what fans are used to or what the general perception of them is. The second line was a mess. But this is a recurring theme with this team. For the most part this week’s contestants to make something of the second line were Troy Browuer, Jeff Halpern, and Marcus Johansson. That trio had a goal (Halpern) and an assist (Johansson, but on an Ovechkin goal) for the week. The third line of Jason Chimera, Brooks Laich, and Joel Ward was 0-2-2, minus-4 for the week. The defense had no goals and two assists for the week (Wideman, Dmitry Orlov).

We are at a loss to know what to make of Mike Knuble and his ice time. He average 9:15 of even strength ice time for the week in his continuing role as a fourth liner (he had more than 15 minutes of total ice time only once in his last 11 games). On a team that really isn’t getting the greasy goal or making much noise at all from in close, test driving him on one of the top two lines might not be such a bad idea. Then again, we don’t coach for a living.

The offensive woes wasted a decent performance defensively and in goal in the last game of the week and left the game against Winnipeg tighter than it should have been, even against a team that has been successful at home. The Caps now have nine games under Dale Hunter. The shakedown cruise really should be coming to an end. It is fair to ask whether the players now getting time are as good a fit for the systems Hunter employs as they were for those Bruce Boudreau employed. That will be the question in the weeks ahead, not whether the players are picking up the new systems.
Posted by The Peerless at 12:54 PM

Email ThisBlogThis!Share to TwitterShare to FacebookShare to Pinterest
Labels: that was the week that was, the peerless prognosticator, Washington Capitals

Great write up. Is there any reason to believe that Dale is cleaning up the defensive zone before working towards fixing the offensive struggles?