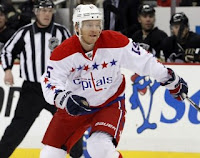 Jeff Halpern
Theme: “Home is where one starts from.”
-- T. S. Eliot

(click pic for larger image)
Thirteen years ago Jeff Halpern was signed as an undrafted free agent by the Washington Capitals making him the first native of the Washington, D.C, area to sign with the club. He played six seasons with the Caps – 648 regular season games and 17 post-season contests – before heading off into free agency in 2006, signing with the Dallas Stars. He played a few games fewer than two seasons with the Stars, moved to Tampa Bay at the trading deadline in 2008 (in one of the odder trades in that none of the five principals in the deal – Halpern, Jussi Jokinen, Mike Smith, Brad Richards, and Johan Holmqvist – are with the teams that took them in trade).

Two years later, Halpern was traded to Los Angeles at the 2010 trading deadline, then signed as a free agent by Montreal the following September. He played one season with the Canadiens, and last July 1st signed a free-agent deal with the Caps, back where he started.

In Halpern’s first stint with the Caps he progressed from unlikely starter (making the big club in the fall following his free agent signing) to defense/faceoff specialist, to 20-goal scorer, to team captain. He played for playoff teams, and he played through the tear-down and start of the rebuild. Now, he rejoined the club as a 35-year old veteran with almost 800 games of regular season experience who was expected to chip in fourth – maybe third-line minutes – and provide some more tangible contributions to the score sheet than his predecessor – Boyd Gordon – who himself took the free agent route to Phoenix.

Well, that was the plan. Halpern started respectably enough for a fourth liner. In his first three 10-game segments he was 3-6-9, plus-1. By comparison, at a similar point in his season in 2010-2011, Boyd Gordon was 1-4-5, even. But after going 2-2-4, plus-4 in a four-game stretch ending on December 13th, Halpern would go 33 games without a goal, and the one he scored against the Toronto Maple Leafs on February 25th (the game-winner in a 4-2 win) would be his last of the regular season. He did not play in any of the last seven games of the regular season and saw action on only three of the last 15 games.

Halpern did do the little things that teams need to have done to be successful. His 58.4 percent faceoff winning percentage would have ranked him fourth in the league, had he qualified (not enough draws taken). He was very responsible with the puck; his six giveaways was the ninth lowest total among NHL forwards playing in at least 40 games. His takeaway-to-giveaway ratio was 3.7:1. He was fifth among forwards in blocked shots despite being ninth in average ice time per game and tenth in total minutes played.

Halpern’s underlying numbers are unremarkable. Among the 15 Capital forwards playing in at least 20 games his rankings in such staple 5-on0-5 measures as the various Corsi measures (on-ice, relative, relative to quality of competition), PDO, and quality of teammates rank in the middle third. His quality of competition, however, was generally inferior to that faced by other forwards in this group (Halpern ranked 12th). What one might have expected did in fact come to pass. Halpern had the lowest share of offensive zone starts of any Capital forward (39.2 percent), and yet he still have offensive zone finishes of 42.0 percent at 5-on-5, the largest positive spread in points of any Capital forward. Here is how his number compare to those of last season with Montreal: 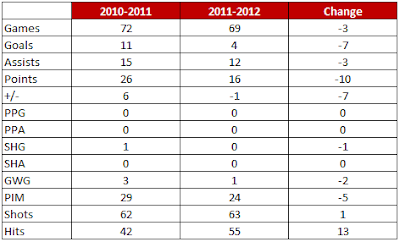 Odd Halpern Fact… Only 19 times in 69 games did Jeff Halpern finish a game with under 50 percent faceoff wins. The Caps were 5-11-3 in those games.

Game to Remember… January 24, 2011. It is not always about scoring goals. Sometimes it is stepping up and not trying to do more than you can, but more of what you do. Until this game against the Boston Bruins, Halpern had been stuck in a rut of averaging in the low-teens in ice time minutes and had gone five games without a point. But on this Tuesday night at Verizon Center, with Alex Ovechkin serving the first game of a three-game suspension, Halpern skated almost 18 minutes, won 11 of 15 draws (including four of six in the defensive zone), had two blocked shots and notched an assist on an empty-net insurance goal in a 5-3 win over the Bruins.

Game to Forget… March 23, 2012. In what would be Jeff Halpern’s last appearance of the regular season the Caps raced out to a 3-0 lead against the Winnipeg Jets before the game was 26 minutes old. But the Jets scored in the 27th minute, again in the 29th minutes to get the Jets close, then one more time with less than four minutes in regulation. Halpern was on the ice for two of those goals, not the expected output for a “defensive” forward who skated a grand total of 4:35 in the game. It was his lowest ice time of the season.

Post-Season… Halpern had only two appearances in the post season, Games 6 and 7 against the Rangers in Round Two, getting the call when Jay Beagle went down to injury. There was not much of a story to tell there. In just over 16 minutes of total ice time he did not record a point, had one shot on goal, won ten of 18 draws and took a high-sticking double minor in Game 6 that the Caps managed to kill off on their way to a 2-1 win in what would be their last victory of the 2011-2012 season.

In the end… It looked early on as if Halpern would contribute something near the level of offense he did in his post-Washington, late-career years. After his first three ten-game segments he was on a pace to finish 8-17-25. As a fourth-liner it would have been roughly equivalent to the contribution of Matt Hendricks in 2010-2011 (9-16-25) in eight fewer games and more than the combined output of Boyd Gordon (3-6-9) and Jay Beagle (2-1-3) in 91 games. However, in his last 40 games Halpern was only 1-6-7 and was reduced to a spare part. It was not the way the season was supposed to go for a homecoming.

Email ThisBlogThis!Share to TwitterShare to FacebookShare to Pinterest
Labels: 2011-2012 BY THE TENS, jeff halpern, NHL, the peerless prognosticator, Washington Capitals