The Peerless Prognosticator is ON THE AIR!!! -- Game 8: Flyers at Capitals, February 1

If it’s Friday, it must the back of a back-to-back.  A week after the Caps closed their first back-to-back set of the 2013 season, they get to do it again.  This time their opponent in the second half of the set is the Philadelphia Flyers.

The Philadelphia Flyers that have a goal by someone named Tye McGinn (who probably is nicknamed “Shootout”), but none from Scott Hartnell, Max Talbot, or Danny Briere.

The Flyers come to Washington for the last of a four-game road trip on which they are already 1-2-0.  The trip started promising enough with a 7-1 win over Florida.  But hey, it was Florida, the Panthers hanging on to the worst record in the league at the moment (correction...the "second" worst record; the Caps saw to that last night).  The Flyers followed up the win with losses to Tampa Bay (5-1) and the New York Rangers (2-1).  Their 2-5-0 record is their worst seven-game start since opening the season with a 1-6-1 record in the 2006-2007 season.

It makes for an interesting matchup in that going into Thursday night’s games the Caps and Flyers combined for a goal total only equal to that of the San Jose Sharks.  And the Sharks were only second in the league in scoring offense to Tampa Bay.

The Flyers might be good for what ails the Caps, and not just because the Flyers are struggling at the moment.  Since the lockout the Caps are 15-9-4 against the Orange and Black and have been on the losing end of a season series only twice in the last seven years.  The odd thing about that record, though, is that the Caps are only 7-6-1 at home, while posting an 8-3-3 in Philadelphia.  Last year the Caps won the season series opener in Philly but dropped the next three games, including a Gimmick loss in the series finale on Flyer ice. 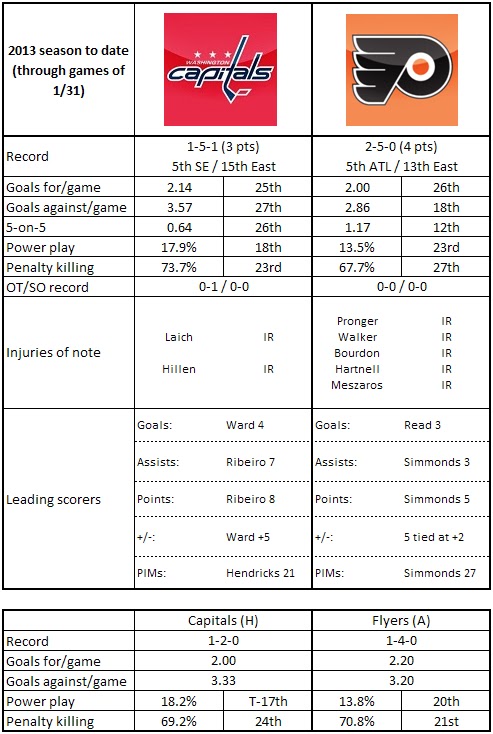 2.  From the “sophomore jinx” file, Sean Couturier scored 13 goals in 77 games for the Flyers last year.  He has been on the ice for 16 goals against in seven games this year, most in the league at any position (ok, he’s tied with John Carlson).

3.  The Flyers have already lost three games by at least three goals.  They had only eight in 82 games last year and didn’t suffer their third such loss until Game 31 of the 2011-2012 season.

4.  Part of the problem is that the Flyers have trailed at the first intermission in five games and lost them all.

5.  The Flyers still aren’t bashful, though.  Their 125 hits on the road led the league going into Thursday night’s games, and no team had taken more minor penalties (42).

1.  283 players have more even strength goals than does Alex Ovechkin, including (in no particular order): Ryan Garbutt, Tomas Vincour, Jake Muzzin, Lennart Petrell…

2.  The Caps have allowed eight third period goals in seven games.  Only five teams have allowed more (Toronto  being one of them…but none last night), but half of them have come in the last two games.

4.  Only two teams have spent more time killing penalties than have the Caps so far.  Their total of 57:59 in penalty killing time is about 14 percent of all the minutes they have skated thus far, about the equivalent of an entire game.

5.  What was once (and what might be once more) the Caps’ top line of Nicklas Backstrom, Troy Brouwer, and Alex Ovechkin rank 1-2-3 among Caps forwards in goals against on ice (9, 8, and 7, respectively).  They have a total of four goals scored among them (Ovechkin and Brouwer with a pair each).

Lost in the Flyers’ early season stumbles is the fact that Ilya Bryzgalov is not playing badly in goal.  After his adventurous post season last spring (5-6, 3.46, .882) one might have wondered if there wouldn’t be a hangover coming into this season.  However, while his win-loss record is only 2-4-0 he does have a 2.19 goals against average and a .924 save percentage.

One would think that Braden Holtby will get his first chance in net tonight since giving up four goals on 39 shots in a 4-2 loss in the Caps’ home opener on January 22nd.  He has a limited resume against the Flyers, only two career appearances – a 3-2 overtime win on November 7, 2010 and a 2-1 Gimmick loss on March 22, 2012.  He has a goals against average of 1.43 and a save percentage of .943 in those two appearances.  The Caps need someone to stop the bleeding.  Holtby might be that guy.

2.  Read and react.  Matt Read probably does not impress the casual hockey fan, but there he is leading the Flyers in goals scored.  Granted, it is not many (three), but he did have 24 goals last year.  He might have been an undrafted free agent, but attention must be paid.

3.  Stop sucking!  That pretty much explains itself.

In the end, this weekend was probably circled by Caps fans as soon as the 2013 schedule came out – home games with Philadelphia and Pittsburgh in the space of about 40 hours.  Caps fans might have yearned for a couple of wins in these games but perhaps did not think them necessary.  One might have thought that the Caps would bank wins against Winnipeg, or Montreal, or Toronto to give them a cushion against the sturdier sort of challenge the Flyers and Penguins might provide.

These are now games the Caps have to win.  A 1-7-1 record heading into next week is (to abuse a word the Caps seem to torture) “unacceptable.”  Lose these games, and the Caps can start surfing the net for tee times in May.