The Peerless Prognosticator is ON THE AIR!!! -- Game 20: Capitals at Jets, March 2

Aw, heck…just head to Winnipeg.  Among cities with populations over 600,000 (Winnipeg, pop.: 663,617) it is the second coldest city on the planet.  And that is where the Washington Capitals are headed on the second and last stop on their two-game road trip (or perhaps more accurately, their second trip on the road this week).

The Winnipeg Jets will host the Caps with a tenuous hold on eighth-place in the Eastern Conference standings.  That is what winning five of their last six games does.  The sad part of that is that on February 17th, just as the Jets were about to embark on that run and just before the Caps took the ice against the New York Rangers, they were in a flat-footed tie with the Caps with a record of 5-8-1.  The Caps, starting with a loss to the Rangers on that evening, are 2-3-0 in their last five games and remain in last place in the East.

In this 5-1-0 run, the Jets have outscored their opponents by a 20-15 margin.  They have not done it with special teams, though, at least as far as the power play is concerned.  Winnipeg is 1-for-17 (5.9 percent) with the man advantage over these six games.  The other side of the special teams – the penalty kill – has fared much better, going 16-for-19 (84.2 percent), and all three power play goals allowed came in a single game.  The Jets were 3-for-6 in a 5-3 loss to Philadelphia last Saturday.

It has been the Evander and Andrew show over these six games.  Evander Kane and Andrew Ladd have five goals apiece, accounting for half the Jets’ production in this stretch. Olli Jokinen and Blake Wheeler have three apiece, so there really is no mystery about who needs attention paid to them.

Here is how the teams stand up against one another, numbers-wise: 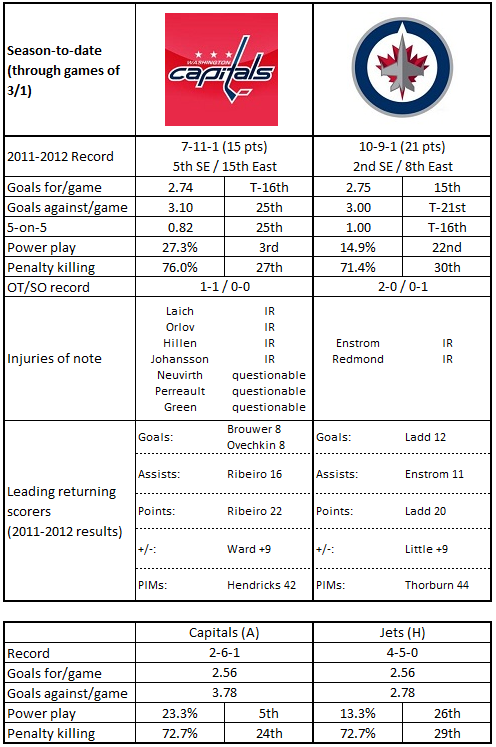 1.  Winnipeg has the worst penalty kill in the league at 71.4 percent.  But they shelter that lack of efficiency by not taking themselves off the ice to kill penalties.  Only four teams have committed fewer minor infractions than the Jets, and no team has faced fewer shorthanded situations.  They average only 2.4 shorthanded situations per game at home this season.

3.  The Jets are one of five teams with an unblemished record when leading after one period (3-0-0).  It is not so much the perfect record that catches one’s eye, but the low frequency – three first intermission leads in 20 games.

4.  Once upon a time, Eric Tangradi was a tantalizing prospect in the Pittsburgh organization.  Big (6’4, 221), with a scoring touch (62 goals over his last two seasons in Canadian juniors), he looked like the proverbial diamond in the rough, a potentially productive power forward.  Fast forward to February.  He was a frequent scratch for the Penguins and was traded to the Jets for a seventh round draft pick.  In eight games for the Jets he has yet to record a point.

5.  Andrew Ladd likes home cooking.  His seven goals at MTS Centre is more than twice as many as the next highest totals (Evander Kane, Blake Wheeler, and Dustin Byfuglien with three apiece).

1.  Only six teams have fewer goals scored at 5-on-5 than the Caps.

2.  Only Columbus has a worse record than the Caps when being out-shot.  The Caps are 3-8-1 when teams out-shoot them.

3.  The Caps have that glowing 27.3 percent conversion rate on power plays.  Pity they don’t get to display it more often.  Only three teams have had fewer power play opportunities.

4.  The combination of the frequency of shorthanded situations faced (79, tenth highest in the league) and a weak penalty kill rate (76.0 percent, fourth worst) means that despite the efficient power play the Caps are actually minus-1 on special teams, 18 goals scored on the power play and 19 allowed (the Caps have allowed and scored a shorthanded goal).

5.  The Caps have had an especially weak penalty kill on the road.  Only Carolina and Colorado have allowed more road power play goals so far.

Well, was Olli Jokinen worth it? Two years, $4.5 million a year.  Five goals, seven points, and a minus-10.  Jokinen suffered a dry stretch when he was without a point in the first nine games of February.  But in the four games since, he has three goals.  Offense is his calling card, of course, but that minus-10 is disturbing. He has been on ice for a third of the total goals scored against the Jets so far this season and more than half the even-strength goals (20 of 38).  He is 16-17-33 in 55 career games against the Caps.  Oh yeah, and a minus-11.

Alex Ovechkin does not lead the Caps in goals on the road.  Mike Ribeiro does not.  Joel Ward does, with four.  Trouble is, every road goal Ward has was scored in a loss.  He had two in Tampa on Opening Night in a 6-3 loss.  He had one in Toronto in a 3-2 loss.  Then he had one in Philadelphia on Wednesday in a 4-1 loss.  Now helpers?  That is a different story.  He has four assists on the road, and the Caps are 3-0-1 in those games.  Maybe ‘tis better to give than receive the assist.  Ward is 1-1-2, minus-7 (!) in 11 career games against the Jets.

2.  Don’t be Beat by Buff.  Dustin Byfuglien is a load.  Yeah, that, too.  But he is a load at home.  All three of his goals have been scored in the friendly confines of MTS Centre, all of them on the power play (only three defensemen have more power play goals).  It’s not as if you can miss him out there.  Pay attention.

The Caps were 1-2-0 in Winnipeg last year and had their trouble scoring goals (only four goals in the three games).  And that is the Caps’ problem right now on the road.  They have single goals scored in each of their last two road games, a 2-1 loss to the New York Rangers and a 4-1 loss to Philadelphia last Wednesday.  In fact, if one discounts road games played against Southeast Division teams, the Caps are 0-5-1 on the road and have been outscored 20-10.  They have only seven even strength goals scored in those six road games.  They have to do better… much better.