The Peerless Prognosticator is ON THE AIR!!! -- Game 22: Panthers at Capitals, March 7th

The trouble with winning a big game in thrilling fashion against a tough opponent is that you have a game to play two nights later.  And if you don’t win that game, especially against a struggling opponent, then the benefits of that thrilling win are largely wasted.

That is where the Washington Capitals find themselves on Thursday in the aftermath of their come-from-behind 4-3 overtime win over the Boston Bruins on Tuesday.  On the one hand, one wants to put that win behind them and focus on the task at hand.  On the other hand, that sort of win is the sort of thing that can propel a team to a run of good luck.  The Caps will try to double down on that big win when they take on the Florida Panthers on Thursday.

The Caps already have two wins against the Panthers, sweeping a home-and-home set last month. The games were a study in contrasts.  In the first game the Caps shut out the Panthers, 5-0, behind a 27-save effort from goalie Braden Holtby.  Game 2 in the set was a shootout, a 6-5 overtime win for the Caps in which the Caps game back from a two-goal deficit in the last six minutes of regulation before winning on a Troy Brouwer overtime goal.

Not that offense has not been an issue as well.  Even though the Panthers have those 29 goals in their last 11 games (2.64/game), more than half of them (15) have come in their three wins, leaving them with 14 goals scored in the other eight games.

Special teams have hardly been that special for the Panthers, either.  Since they last met the Caps, Florida is 6-for-31 on the power play (19.4 percent), but four of those goals came in a single game, a 6-4 win over Pittsburgh on February 26th in which they were 4-for-7 on the power play.  The penalty kill is 21-for-27 (77.8 percent) over the same 11 games.

Florida has had a lot of difficulty getting any traction whatsoever this season.  They have managed consecutive wins only once, winning consecutive games back on January 31st and February 3rd.  On the other side, they have two losing streaks of five games and a three-game losing streak.  Add to that the fact that they have lost their top goaltender (Jose Theodore) for perhaps six weeks with a groin injury and one of their top forwards – Stephen Weiss – for the season with a wrist injury, and the Panthers are in a world of hurt.  That is, unless one is thinking fond thoughts of a top draft pick in June.

Here is how the two teams compare to date… 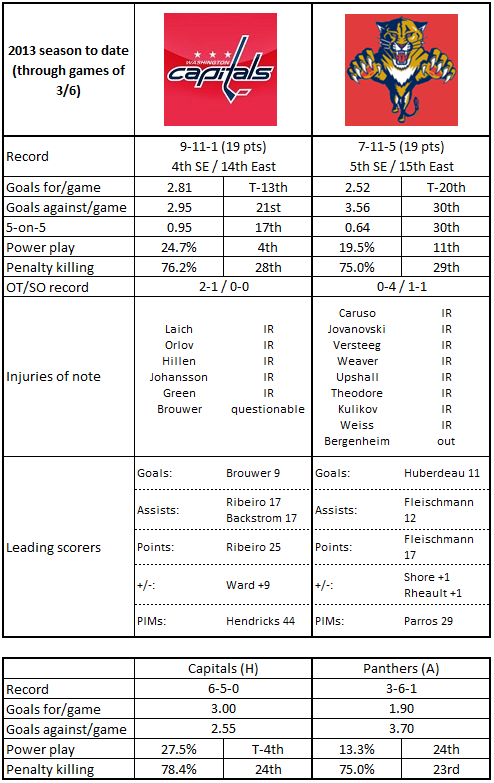 1.  Sure, teams getting a lead in the NHL do well, but the Panthers are especially challenged when falling behind.  Florida has the worst record in the league when allowing the game’s first goal (1-9-3), and they are 1-9-2 when trailing at the first intermission.

2.  No team has allowed more goals at 5-on-5 than the Panthers (56 in 23 games), and only five teams have scored fewer at full and even strength.  That’s why they’re last in 5-on-5 scoring ratio.

4.  Florida has the second worst record in the league in one-goal games (2-1-5), and no team has lost more games by three or more goals (eight of their 11 losses in regulation).

5.  Nineteen players have played in at least ten games for the Panthers this season.  One of them – Drew Shore – has a “plus” record (plus-1).

1.  The Caps are now zero for their last 12 power play opportunities, their longest streak of futility with the man advantage this season.

2.  Washington struggles with scoring in the first period.  Their 14 goals in 21 games ranks in a tie for 21st in the league.  However, only four teams have more third period goals than do the Caps (25).

3.  For the Caps, the object of the exercise seems to be going to the first intermission tied with their opponents.  In games in which either team has a lead after 20 minutes the Caps are 4-9-1.  They are 5-2-0 when deadlocked after 20 minutes.

4.  In that same theme, only two teams have a worse winning percentage than the Caps when scoring first (Edmonton, Columbus).  The Caps are 6-6-0 in such games.

5.  The Caps have won four of their last five games, and in doing so won all of those games against teams that at the time were in the top-eight in the Eastern Conference (yes, even Winnipeg, which was in eighth place when the Caps faced them).

When Jose Theodore went down less than three minutes into the game against Carolina last Saturday, it fell to Scott Clemmensen to fill the breach.  Well, about that.  In that game and the follow up, the second half of a back-to-back against Carolina, Clemmensen allowed nine goals on 57 shots.  An .842 save percentage is not conducive to a long spell as the starting goaltender, and Clemmensen gave way to Jacob Markstrom in the Panthers’ last game, a 4-1 win over Winnipeg in which Markstrom stopped 30 of 31 shots.  Clemmensen allowed goals on two of the last three shots he faced in regulation in his only appearance against the Caps this season, then allowed the game-winner on the second shot he faced in overtime.  Markstrom might be the goalie of the future for the Panthers, but he has only one career appearance against the Caps (that in his first NHL start and second career appearance).  Clemmensen might be the guy…for now.

Last year, John Carlson was not necessarily a mainstay on the Caps’ power play, but he did go 4-3-7 from the blue line on the man advantage.  This season he has yet to register a point on the power play.  And while the Caps have had quite a run of success on the power play overall this season, they have yet to get a goal from a defenseman on the power play.  With Mike Green out with an injury, Carlson leads the Caps’ blueliners in power play ice time per game.  If the Caps are going to continue (or, given their current 0-for-12 run, return to) their power play success, Carlson is going to have to play a bigger role.

Oh, shoot…there shouldn’t be any “keys” in this game.  The Caps should make short work of the Panthers.  If there is a “key,” it is to maintain focus.  That can be an issue after a win such as that the Caps secured over Boston on Tuesday.  But Florida not only is not very good, but they were decimated by injuries before they lost Jose Theodore and Stephen Weiss..  They are last in scoring defense, last in 5-on-5 play, and next to last in penalty killing.  This is just a game the Caps can’t lose.  If they do, they might not (as Herb Brooks might have said) “take it to their #@$&ing graves,” but they might carry it to an early end to their season.  This is two points that need to be in the bank.