Washington Capitals -- That Was The Week That Was: Week 8

Week 8 is in the books for the Washington Capitals, which means it is time for us to take a look at the week that was and ask, are the Caps making progress? 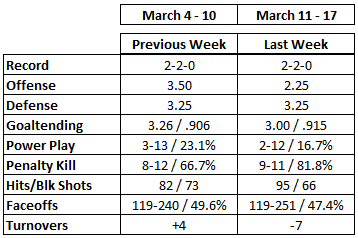 For all the pain and frustration that Washington’s season has had so far, this was the fifth straight non-losing week for the Caps.  Unfortunately, it is also their second straight non-winning week and third in the last four.  Wins against Carolina and Buffalo alongside losses to the Hurricanes and Boston made for another “marking time” week.  In the last five weeks the Caps are 9-7-0, but that has not made much of a dent in their deficit in the standings.  On February 10th, before these five non-losing weeks began, the Caps were 3-8-1 and in 15th place in the Eastern Conference, five points out of eighth place in the conference and out of the Southeast Division lead.  Five weeks later, the 9-7-0 record has lifted them to 13th place in the East, but they remain six points out of eighth place in the East and seven out of the division lead.

The first period killed the Caps this week.  In 240 minutes of play, the Caps recorded one first period goal on 34 shots.  It was not necessarily the case that the guys who need to shoot did not shoot the puck.  The three top goal scorers for the Caps – Alex Ovechkin, Mike Ribeiro, and Troy Brouwer – had a combined 10 shots in the first period over the four games, Ovechkin getting the only goal among the trio of players.  If there was a broader problem overall, it was just not getting enough pressure on the opponent’s net.  The Caps managed to average only 27.3 shots per game for the week, a number that is a bit skewed by their heaving 33 shots at the Bruin net in a 4-1 loss in Boston (25 of them coming after Boston built a 3-0 lead).

The Caps allowed the first goal of the game three times in four games this week.  They allowed a second unanswered goal three times in four games this week.  They allowed opponents to get 47 shots on goal in the first period of games (11.8 per game) a number that would have been worse had not the Caps faced the hapless Buffalo Sabres in the last game of the week and allowed only five first period goals.  Four different Caps defensemen were on ice for two goals against of the five first period goals scored by opponents this week – Karl Alzner, Jeff Schultz, Tomas Kundratek, and Steve Oleksy.  All-in-all, however, there are other factors to consider, foremost among them being that the Caps dressed three different six-man defensive squads this week.  That was because the Caps lost two defensemen to injury during games (Tomas Kundratek and Tom Poti, forcing the Caps to play with five defensemen for most of the time against Carolina and Buffalo...oddly enough, the two wins this week).  In another they started a defenseman making his NHL debut (Cameron Schilling in the first Carolina game, a 4-0 loss).  It was indicative that there was no apparent single breakdown that led to early deficits or other defensive problems, that is, unless you consider the problem to have been…

The goaltending was not bad last week, not as a function of percentage of shots stopped overall.  But in the four games the save percentage of Michal Neuvirth and Braden Holtby was .894 in the first period.  True, there was a high shot volume, but sometimes the goaltender has to keep his team in the game as they get their skates under them.  Twice this week the Caps found themselves in an 0-2 hole in the first period and had another game in which they were down 0-2 in the second period.  The goaltending improved over the course of games, but it did not give the Caps the early lift they could have used over the course of what would be a marking time week.

One might be inclined to say that the Caps came to earth a bit this week having had to face the Boston Bruins, the league’s top penalty killing team on Saturday.  And yes, the Bruins held the Caps without a power play goal in three tries, and they held the Caps to only three power play shots in 5:55 of ice time.  Then again, the Caps also faced Carolina twice and Buffalo, both teams with penalty killing rates below 80 percent for the season.  The Caps were 2-for-9 in those three games, a good outcome, but one that might have been better against this competition.  Recording only 15 shots in 23:11 of power play ice time and allowing three shorthanded shots – one of them a goal – did not help.

The penalty kill was a bit of an odd duck this week.  The 81.8 percent is not a particularly stingy number, but both power play goals were scored in the third period and when the margin was two goals.  The last goal in Boston’s 4-1 win was a power play goal, and Buffalo’s third and last goal was scored with the Caps leading 4-2.  That one made for an interesting finish – more so than one might have liked – but it did not figure in the decision.  The 11 power plays allowed, though, was a good thing.  It is part of a good trend.  Only twice in the last 12 games have the Caps allowed more than three power plays in a game.  The best penalty killing is not having to kill penalties…you can count on being 100 percent in those instances. And for this team, ranking 28th when they do have to kill penalties, that would be the best thing of all.

After Week 3, when the Caps were stuck at 3-8-1, they ranked 20th in hits and 11th in blocked shots.  Here we are, five weeks later, and the Caps are pretty much right in the same place in the rankings.  Sound familiar?

Thank heaven for the Buffalo Sabres. If not for a 41-for-64 effort against Buffalo to end the week, the Caps would have been mauled in the circle.  The Caps were on the wrong end of the faceoff wins in three games this week, failing to hit the 45 percent winning percentage mark in any of them.  Even for the week as a whole it was a struggle in the ends – 39.1 percent in the offensive end, 48.4 percent in the defensive end.  That offensive end performance was made worse by the fact that the “offensive guys” – Mike Ribeiro and Nicklas Backstrom – were a combined 15-for-42 for the week (35.7 percent).  They did have that pretty goal off a faceoff win against the Sabres early in that game, though.

But for the game against Buffalo, it would have been much worse.  The Caps were a plus-7 against the Sabres, which was more or less indicative of the state of control of the game for the two teams. But going minus-14 in the other three games was indicative in its own way of the Capitals’ week.  And not in a good way.

Last week, we said that this week was for the Caps’ season.  The two games against Carolina were the critical games of the week.  The Caps split them.  Had they swept them, it would have been two fewer points earned by Carolina (they would have 29 points tonight), and the Caps would have two more (27).  But instead of being two points out of a playoff spot, the Caps are six out with 20 games left to play.  If eighth-place Carolina plays .500 in standings points for the rest of the season they will finish with 52 points.  The Caps would need 27 points in 20 games to tie.  That is a 111-point pace over an 82-game schedule.  And what is worse, the Caps are now off to a four game road trip that will take the Caps more than 2,500 miles over six days.  They are in the difficult position of having to win three of the four games, if not all four.  Washington has a record of 1-5-0 and has been outscored, 21-12, so far this season against the teams they are playing this week.

Email ThisBlogThis!Share to TwitterShare to FacebookShare to Pinterest
Labels: 2012-2013 nhl season, NHL, that was the week that was, Washington Capitals