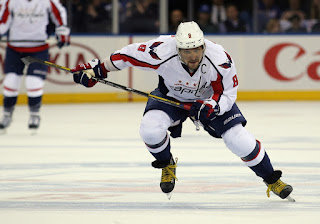 “Glory is fleeting, but obscurity is forever.”
-- Napoleon Bonaparte

If Alex Ovechkin averages 25 goals per season over the remainder of his contract, he will stand at the edge of the top 20 goals scorers of all time in the NHL. If he averages a sliver more than 30 per season, he will be among the top 15 goal scorers of all time.  Do you know how many players in the top-15 who have never won a Stanley Cup?

Winning a Stanley Cup is not the only measure of greatness in evaluating the career of an NHL player, but if a player is going to be mentioned among the best who ever played, he has to win at least one.  Ten of the top-15 goal scorers have won multiple Cups.

And yet here we are, Ovechkin having completed his eighth season – his sixth consecutive one that included a trip to the playoffs – and he is no closer now to a Cup now than he was at the end of his first playoff season.

It is not fair, to be sure, but it is the world of sport in which he plays, fans cheer and sports journalists cast their votes over the span of years for those considered the “greatest” instead of “great.”  The 2013 season, abbreviated by the mindless nonsense that was The Great Lockout of 2012-2013, probably cost him as many as 20 goals in his career goal total, but more importantly, might have cost him – and his team – 34 regular season games with which to master more completely the systems of new head coach Adam Oates and perhaps make a bigger dent in the playoffs.

One really can wonder what those 34 games might have meant to Ovechkin and the Caps.  Look at his goal progression through the “tens” – two in his first ten games, when the Caps were off to a 2-7-1 start, six in his next ten, then five, then 13 in his fourth ten-game split.  He had “only” six in his last eight games, itself a 60-goal pace.  That progression followed nicely the ten-game win-loss progression of the Caps:

Now, let us start to unpack those numbers.  Ovechkin finished the season with 32 goals to lead the league, a 55-goal pace over 82 games.  But here is the thing about those goals.  Only 14 of them were scored at 5-on-5.  Five players scored more goals at 5-on-5, including Carolina’s Jiri Tlusty (not generally thought of as a household name among goal scorers), and it was only one more than Derek Stepan, Michael Grabner, and Blake Wheeler, among others.

With Ovechkin’s talents as a finisher, one would expect that those with whom he plays would enjoy more offensive success as a group playing with him than playing apart from him, and this is generally the case.  At 5-on-5 the centers with whom he spent most of his time – Nicklas Backstrom and Mike Ribeiro – each had higher GF20 values (team goals scored for per 20 minutes of ice time at stats.hockeyanalysis.com) playing with Ovechkin than playing apart from him.  The exception among forwards with whom he skated more than 100 minutes of 5-on-5 ice time was Marcus Johansson.

It is no secret that Ovechkin is an offensive player, and it is a continuing theme that he has issues playing in his own end.  Hockey being a team sport, it would be hard to blame him (or any single player) for specific defensive problems, but while he had a respectable PDO value at 5-on-5 this season (sum of on-ice team shooting percentage and save percentage), it was bolstered by his having the third highest team shooting percentage at 5-on-5.  As for the other side of that value – team save percentage – he was 12th among 14 Capitals forwards having played at least 20 games (numbers from behindthenet.ca).

His possession numbers at 5-on-5 were not particularly impressive, either.  He finished seventh in Corsi on-ice among 14 Capitals forwards playing in at least 20 games and finished in the middle of the Capitals pack in variations on that Corsi measure as computed at behindthenet.ca.  It goes some way to explain how it was that Ovechkin finished only fifth among Caps forwards in plus-minus on ice per 60 minutes at 5-on-5.  All of this was obtained while having the largest share of offensive zone starts among all of those Capital forwards. 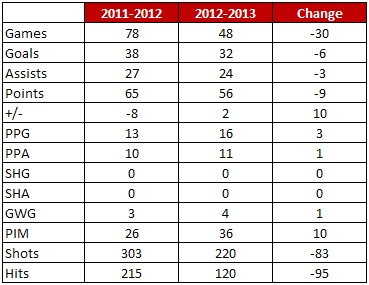 Odd Ovechkin Statistic… “23.”  Alex Ovechkin played his last 23 games of the regular season without going consecutive games without a goal.  He scored goals in 17 of those games, going 23-13-36, plus-9.  Ten of those 23 goals were scored on the power play.

Game to Remember… February 23rd vs. New Jersey.  The Caps were looking for a life saver.  With a record of 5-10-1, losers of two straight, they were sitting in last place in the Eastern Conference.  As luck, or the NHL schedule-makers, would have it, the Caps were coming off a 3-2 loss to the New Jersey Devils in their previous game in which they gave up a 2-1 lead after two periods.  Now, they got a chance to redeem themselves against those same Devils.  Alex Ovechkin got a chance to redeem himself, too.  He was on ice for all three goals against in the 3-2 loss.

Redeem himself, he did.  After a scoreless first period, Ovechkin scored on a wrist shot with less than six minutes gone in the second frame.  After Ilya Kovalchuk tied it for the Devils before the second intermission, Ovechkin gave the Caps the lead once more in the second minute of the third period.  Then, with the Caps up 3-1, thanks to a shorthanded goal by Eric Fehr, Ovechkin drove a stake into the Devils’ chances for a comeback with a power play goal with just under five minutes left.  He added an assist on a Troy Brouwer power play goal with less than three minutes left, and the Caps had a 5-1 win.  It was Ovechkin’s first hat trick in more than two years and his first four-point game since February 4, 2011 in a 5-2 win over the Tampa Bay Lightning.

Game to forget… March 12th vs. Carolina.  The Caps were coming off losses to the New York teams – the Islanders and Rangers – and looking bad in the process, both losses of the three-goal variety.  Facing a Southeast Division team at home seemed just the tonic.  It tasted more like vinegar to the Caps.  Carolina slowly and methodically ground the Caps down over the first 40 minutes, outshooting the Caps by a 31-19 margin and building a 3-0 lead in the process.  Carolina added an empty net shorthanded goal (for which Ovechkin was on the ice) to complete the 4-0 shutout and leave Washington with the Caps on a three-game losing streak.  Ovechkin recorded no shots on goal for the contest.  Oddly enough, it was the second straight game against Carolina in which he pulled that off.  They were the only two regular season games in which he did not record a shot on goal.

And here is the oddest part of all about those numbers.  He scored his lone goal of the series 6:59 into the second period of Game 1, a 3-1 win for the Caps.  He did not register another shot on goal in that game.  Then, in Games 2-7 he went 0-for-25 shooting.  He did not register a point after Game 2.  In the three games ending in Caps’ wins in the series, Ovechkin recorded 21 shots on goal.  In the four losses he finished with a total of nine shots on goal.  This is not difficult math.  Even if he was not effective, his shot volumes were indicative of the sort of pressure the Caps could put on the Rangers.  Absent those shot volumes, the Caps lost (even as they scored three goals twice in losses).  This was, to be charitable, not a post-season that will go in the scrapbook.  Maybe the scrap heap.

Twenty years from now, unless he is spirited away by aliens, Alex Ovechkin is going to be one of the most prolific goal scorers ever to wear an NHL sweater.  It is entirely possible that he will do it without having won a Stanley Cup.  In that case he will be more a historical curiosity than a player mentioned with the greats.  That is just the way it is.  In 2013 he did some fine things, but they had the more than a faint whiff of “been there, done that.”  Leading goal scorer…been there, done that.  Scored a bushel of power play goals…been there, done that.  Hit like a freight train…been there, done that.  Unfortunately, there is also “early playoff exit”…been there, done that.  And this year, as has been the case in the previous two post-seasons, it was not a case of his performing valiantly in the face of disappointment.  His production just has not been there.  2013 was his least productive post-season since he was an 18-year old playing for Dynamo Moscow (no points in three playoff games).  A Richard Trophy for most goals and nomination as a Hart Trophy finalist is not nothing, but it is now the post season on which he will be judged in the history of the sport.  He has to produce.  This year, he did not.


Bruce Bennett/Getty Images North America
Posted by The Peerless at 6:09 AM