The Peerless Prognosticator is ON THE AIR!!! -- Game 10: Capitals at Oilers, October 24th

The Washington Capitals, fresh off their 5-4 freestyle competition win over the Winnipeg Jets, continue their tour of western Canada Thursday night when they face the Edmonton Oilers at Rexall Place.  The former Northlands Coliseum/Edmonton Coliseum/Skyreach Centre is one of the older rinks in the NHL, having opened for business in 1974.  It is approaching the end of its useful life as an NHL venue, the planned replacement to be located in downtown Edmonton and planned for groundbreaking next spring.

For now, though, this arena has a lot of history in it.  Five Stanley Cup winners, with replica Cups occupying a place near the home team’s dressing room displaying the names of all the Oilers who won Cups with the team.  There is even a space left open as a reminder that there is always room for another Cup.

It just might not be coming along very soon.  The Oilers, who took a 1-3-1 record into Verizon Center last week and dropped a 4-2 decision to the Capitals, have only slowly been getting their footing since.  They dropped a pair of 3-2 decisions – one in Pittsburgh and one against the New York Islanders on Long Island – before heading to back to Canada to wrap up a six-game road trip with a 3-1 win in Ottawa and a 4-3 win in Montreal.

In those four games since the teams last met, the Oilers have found goals difficult to come by, scoring a total of 11 in the four contests.  The problem is that none of them came on the power play.  The Oilers are 0-for-13 in their last four games, extending a string of fruitless power plays to 18 dating back to the second period of their 6-5 overtime loss to Toronto on October 12th.

A lingering problem is the shots allowed by the Oilers – 34 per game over their last four contests.  In none of those games did the Oilers outshoot their opponents.  It has placed pressure on the offense to be efficient.  Their 10.6 percent shooting percentage in those games compares well to the league (8.8 percent) and is better than all but seven other teams’ season shooting percentage.

The Oiler offense has been led by Jordan Eberle (2-4-0) in the four games since Edmonton faced the Caps.  Eberle shares the goal scoring lead with Ales Hemsky Taylor Hall, and Ryan Nugent-Hopkins.  Mark Arcobello has five assists over the four games, giving him ten on the season.  That puts him in the “which one of these names does not belong” tie with Sidney Crosby, Henrik Sedin, and Joe Thornton for the league lead. 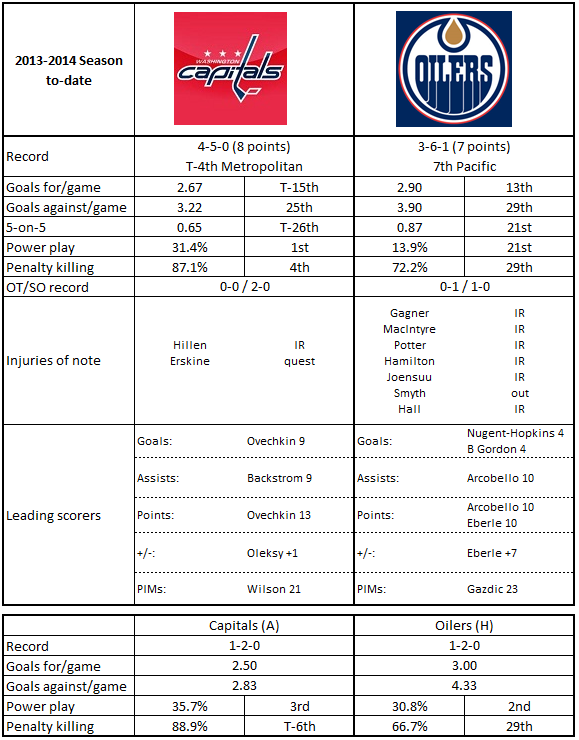 1.  Taylor Hall, who is tied for third on the team in points, is out with a sprained left knee and will miss perhaps a month on injured reserve.  It is the latest of nicks that have eaten into his playing time.  In two previous 82-game seasons he missed 17 and 21 games (ankle, shoulder, and concussion), and last year he missed three of 48 games (one to a hamstring injury and two to suspension).

2.  Only one team in the league has taken more minor penalties than Edmonton (47).  That would be Winnipeg (50), the team the Caps just finished with.  The Oilers, however, have escaped without having to go shorthanded as many times as the number of penalties would suggest.  Their total of 36 shorthanded situations faced ranks as the 11th most in the league.

3.  Think Edmonton wants Boyd Gordon for his defense?  Through ten games he has the team's lowest share of zone starts taken in the offensive zone, and it’s not close.  He has taken 17.7 percent of his zone starts in the defensive end.  Ryan Smyth is next lowest with 22.2 percent (source: extraskater.com).

5.  Back to this Arcobello kid.  First, Mark Arcobello is not a kid, he is a 25-year old rookie.  He was undrafted and spent four years at Yale University.  Then he spent three seasons toiling in the minors – splitting time with the Stockton Thunder in the ECHL and the Oklahoma City Barons in the AHL in 2010-2011, then skating two more seasons with Barons (earning a one game look with the Oilers last season).  His performance, while showing constant improvement in the AHL, did not look outsized in his regular season performance (22-46-68 in 74 games last season), but his playoff performance was worth noting.  In 2012 he was 5-8-13 in 14 games with Oklahoma City and 12-8-20 in 17 games with the Barons in last season’s playoffs.  He is currently tied with San Jose’s Tomas Hertl for the rookie points lead (ten).

1.  The Caps’ possession numbers are brutal.  At 5-on-5 with the score tied, they are 22nd in Corsi-for percentage (46.8 percent as a share of combined Corsi-for and Corsi-against events) and 24th in Fenwick-for percentage (44.7 percent; source: extraskater.com).

2.  Shot distances by themselves do not provide nuance – you don’t have a sense of the “degree of difficulty” of shots – and they can suffer from errors in observation (assignment of distances), but they do suggest a player’s willingness to traffic in difficult areas to get shots.  The shortest average shot distance for the Caps so far belongs to Mikhail Grabovski (16.8 feet).  But let us not make too much of this.  Marcus Johansson has the third shortest average shot distance (22.5 feet; source: extraskater.com).

3.  Mike Green and John Carlson lead, for lack of a better word, Capitals defensemen in goals scored against/on ice.  This is, no doubt, partly a function of their ice time (they are first and second on the team in total average ice time), but since the two are almost never paired (they have less than nine minutes together at 5-on-5 this season; source: stats.hockeyanalysis.com), it suggests a disturbing problem on the top two defense pairs.  It is not evident who can be counted on to be the shutdown type.

4.  The Caps still do not have a roster defenseman with a goal this season.  Connor Carrick, currently in Hershey, has the only one for the blueliners.  The current roster defensemen are 0-for-87 shooting the puck.

In his first four games this season Nail Yakupov, the first overall pick in the 2012 draft, had no points, ten shots on goal, and was a minus-1.  That lackluster spot earned him a seat in the press box for two games, one of them being the Oilers’ first meeting with the Caps.  He was returned to the lineup last week against Pittsburgh and has played in four games since his benching.  Things have improved…barely.  He has an assist in those four games, nine shots on goal, and is a plus-2.  Despite getting almost three minutes of power play ice time a game so far he does not have a point on the man advantage.  At even strength no Oiler has a higher share of offensive zone starts.  He has been put in situations advantageous to offensive success, and he has not produced as yet.  As a result, he is now being whispered about – pro and con – in trade rumors.  Yakupov has a great big bulls eye on his back, and in the Oilers’ first home game after a six-game road trip, that bulls-eye is flashing bright red.  This will be his first career game against the Caps…if he dresses.

Did you think we would be going into Game 10 of the season and still be waiting for Mike Green’s first even strength point of the season?  There are 78 defensemen ahead of Green at the moment, including the likes of Anton Belov, Justin Braun, Sami Vatanen, and Jake Muzzin.  Then, in the midst of having what might have been his worst overall game in recent memory in Tuesday’s win in Winnipeg, he was benched for the last 9:35 of regulation and all five minutes of overtime.  It was the first time this season he skated less than 20 minutes (18:13), and his lowest ice time since March 16, 2012, when he skated 18:11 in a 3-2 loss in (coincidentally) Winnipeg.  Like many Caps, Green does not have much of a history against the Oilers.  He is 2-2-4, minus-3 in five career games against Edmonton.

2.  Grab and hold.  The Caps had a lead against Winnipeg heading into the last minute of the second period and gave up a goal.  They took a lead early in the third period and gave up a goal.  One of the disturbing things about the Caps early is their frustrating tendency to get leads and cough them up.  That’s another manifestation of the lack of killer instinct this club has displayed in recent years.

3.  Play your game…play your game.  Getting into a shooting match with Winnipeg is one thing.  They are a team of some, but not extraordinary offensive skill.  Do that against the Oilers, and it will be a difficult night.  The Oilers have speed and skill, especially among their forwards, that can exploit any timidity or lack of foot speed among the Caps, especially the defensemen.  If the Oilers are entering the offensive zone with speed and puck control, backing the Caps off, look out.  Play ugly, or at least homely.

This is a bit of a benchmark game.  The Caps beat Edmonton in Washington when they strafed the Oilers for three goals in less than four minutes in the second period on their way to a 4-2 win.  As a 60-minute matter the Caps were less dominant, getting outshot by a 30-20 margin.  The Caps come into this game having won two in a row, but then too, so do the Oilers.  And you can make the argument that the Oilers’ two wins came against competition – Ottawa and Montreal – superior to that faced by the Caps (Columbus and Winnipeg).  Washington has the chance to get to the .500 mark for the first time since Game 2 that compared to last year, when they did not hit the .500 mark until Game 36, would seem like they were the 1978 Montreal Canadiens reincarnated.  They will have just enough to hold back Oilers and hit that mark.

Dallas Eakins has turned the Oilers into a science project...if you want use an Oilers exercise bike, you have to put a tube up your nose. The guy is a triathlete wannabe who the Oilers will grow to hate. I'm a professional sports bettor, so I could give a rats ass 'bout the Caps, but I like the Caps experience and maturity here, against the no-fun-bunch.

"Through ten games he has the team's lowest share of zone starts taken in the offensive zone, and it’s not close. He has taken 17.7 percent of his zone starts in the defensive end."

I think the first bolded should be defensive zone, but I am not sure