The Peerless Prognosticator is ON THE AIR!!! -- Game 12: Capitals at Canucks, October 28th

The Washington Capitals end the western leg of their five-game road trip with a visit to Vancouver, British Columbia, a city often mentioned among the highest-quality, most scenic, and most livable cities in the world.  And to think, it was once named “Gastown,” named for a saloon owner, Jack “Gassy” Deighton, back in the 1860’s.

What it is these days, along with being a tourism and shipping center, is the home of one of the more entertaining, if frustrating hockey teams in the NHL.  Over the last 12 seasons the Canucks reached the playoffs ten times, but advanced past the second round only once, a trip to the Stanley Cup finals in 2011.  Since that Stanley Cup finals appearance the Canucks have been one-and-done in the playoffs twice, leading to a change behind the bench for the 2013-2014 season.

John Tortorella takes his unique brand of homey charm and aw-shucks demeanor from Manhattan, where he spent four-plus seasons leading the New York Rangers, to the furthest reaches of the NHL northwest.

The Canucks are not like the Tampa Bay Lightning he took over in 2000, a team that managed only 54 points in the season before his arrival, or the 2008-2009 Rangers, a team that was sinking out of playoff contention with a 2-7-3 record in the dozen games before his arrival.  Before last season the Canucks had won more than 40 games in nine of ten seasons, and in last year’s 48-game season were on a pace for 44 wins.  This is an accomplished group in the regular season (sound familiar?).

What the Caps are getting in this game is another team returning home after a long road trip.  Just as they faced Calgary after the Flames finished up a five-game road trip, the Caps will get the Canucks returning home after a seven-game road trip, one on which they went 5-1-1.  It was not as dominating a trip as the record would suggest.  Five of the games were one-goal decisions, and another featured an empty net goal in what would be a 3-1 loss to Columbus.  Four of the games went to extra time, including the last three, all of them Vancouver wins.

The trip might have served the purpose of getting the bad taste out of their mouths from bad home cooking early on.  The Canucks have played only four home games thus far and have only one win in regulation time, that coming in their home opener, a 6-2 win over Edmonton on October 8th.  Here are the teams numbers to date, lined up for your edification... 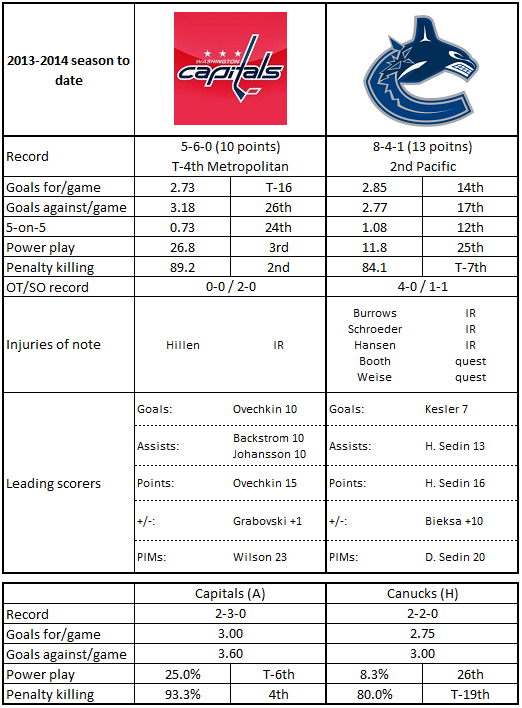 1.  Vancouver spread their scoring around on their seven game road trip – 18 different skaters recorded points.  Ryan Kesler led the Canucks in goals with six (6-3-9), while Henrik Sedin led the team in assists with seven (2-7-9).

3.  Vancouver does not finish games particularly strong, at least on offense.  They have only eight third period goals in 13 games.  Only five teams have scored fewer third period goals per game, and none of them are in the playoff rung of the standings.

4. The flip side of that is that Vancouver has the fourth best record in the league when allowing the game’s first goal (5-3-0).  That they have done it eight times in 13 games might be of some concern to Canuck fans.

5.  Last season the Canucks finished 27th in the league in blocked shots.  At the moment they are tied for fourth.  Think their new head coach has anything to do with that?

2.  Among Capitals defensemen so far this season, would it surprise you that Mike Green has the second lowest offensive/defensive zone start percentage (48.9 percent; John Erskine has 40.8 percent; source: extraskater.com)?

3.  Second Line Blues… In 5-on-5 close situations, Mikhail Grabovski, who started out centering  the second line but now centers the third line, has the highest PDO on the club (1109).  Troy Brouwer is second (1036).  Brooks Laich, who started the year on the left side of the second line and is now its center, has a 968 PDO (source: extraskater.com).

4.  More on that even strength thing… only Edmonton and the New York Islanders have allowed more 5-on-5 goals than the Caps.

5.  In their last seven visits to Vancouver the Caps are 1-5-1 and have been outscored, 32-16.  Their last win took place on Valentine’s Day 2001, a 4-3 overtime win.  How long ago is that? Adam Oates had two goals (including the game-winner 41 seconds into overtime), and Calle Johansson added another.  Olaf Kolzig got the win in goal.  All are coaches with the Caps now.

Over the past three seasons, only Shea Weber and Erik Karlsson have more goals among NHL defensemen than Jason Garrison.  And, he is not shy about shooting the puck.  In an October 12th game against the Montreal Canadiens he recorded ten shots on goal, the 13th defenseman to do so since the 2004-2005 lockout.  The thing is, though, in seven games since he has a combined total of 11 shots on goal.  Maybe his arms are still tired.  In 13 career games against the Caps he is 0-3-3, minus-4 (all with the Florida Panthers).

Braden Holtby and Michal Neuvirth have a combined 40 minutes of career experience against the Canucks, all of it by Neuvirth.  It was not pleasant.  On October 29, 2011, Neuvirth took over for starter Tomas Vokoun at the start of the second period in what was already a 3-1 Canuck lead in Vancouver.  Neuvirth allowed four goals on 26 shots in 40 minutes of work in the 7-4 Capitals loss.  The question for tonight's game is whether Neuvirth gets his first start since October 12th (a 5-1 loss to Colorado) or head coach Adam Oates puts Holtby back between the pipes after pulling him (to Holtby’s chagrin) mid-way through the first period against Calgary on Saturday.

2.  More Power!  The Caps have gone seven power plays without a goal, a long stretch for them in this young season.  Vancouver has allowed power play goals in each of their last three games (55.6 percent penalty kill) and four of their last five (72.2 percent).

3.  Clean Sedin.  Daniel and Henrik Sedin both recorded points in nine of 13 Canuck games so far this season.  Vancouver is 7-2-0 in those games.  Keeping them clean on the score sheet could be a tall order, at least as far as keeping Henrik off the board is concerned.  He has points in 12 of 13 games.  Only San Jose has blanked him.  In fact, the Sharks are the only club to date to keep both Sedins off the score sheet in a game this season so far.

In the end… This is not unlike the run-up to the Redskins/Broncos game this week.  On paper, it is a steep climb for the Caps.  They have a poor track record in Vancouver, they are in their fourth game of a long road trip, and there are nagging problems that continue to hound this team, ones that are sometimes hidden behind an effective power play.  On paper, one would have to think the Canucks would be a solid favorite.  Yeah, well, if games were played on paper, the Redskins would have a half dozen Lombardi Trophies by now.

Forget the Skins with 6 Super Bowls, the Caps would have at least a Stanley Cup or two if games were played on paper.