The Peerless Prognosticator is ON THE AIR!!! -- Game 21: Blues at Capitals, November 17th

The Washington Capitals return from their one-game road trip to Detroit to host the St. Louis Blues Sunday evening at Verizon Center.  The Caps return home fresh off a 4-3 trick shot win over the Red Wings and bring a 6-1-1 record for the month of November into the game.

The Blues will be coming to Washington the day after a 4-2 win over Carolina.  It is not as if the Blues get out of the house often, so to speak.  Their visit to Washington will be only their seventh road game this season, which will tie Boston for fewest road contests in the league.

St. Louis is the hottest team in the league (with Phoenix and Minnesota) with an 8-1-1 record over their last ten games.  They outscored their opponents by a 35-20 margin in those ten games, three of the wins coming by margins of three or more goals.  Their power play is 9-for-38 in that span (23.7 percent), while their penalty kill is 28-for-31 (90.3 percent).

Steen has packed a season’s worth of production into his first 18 games.  He leads the club and the league in goals scored with 17, a pace that would produce 77 per 82 games (bet the under).  Almost as incredible, he has points in 17 of his 18 games, including a 13-game streak that he will bring to Verizon Center on Sunday.  Only the San Jose Sharks held him off the score sheet, blanking him in a 6-2 win over the Blues in what is St. Louis’ worst loss of the season to date. 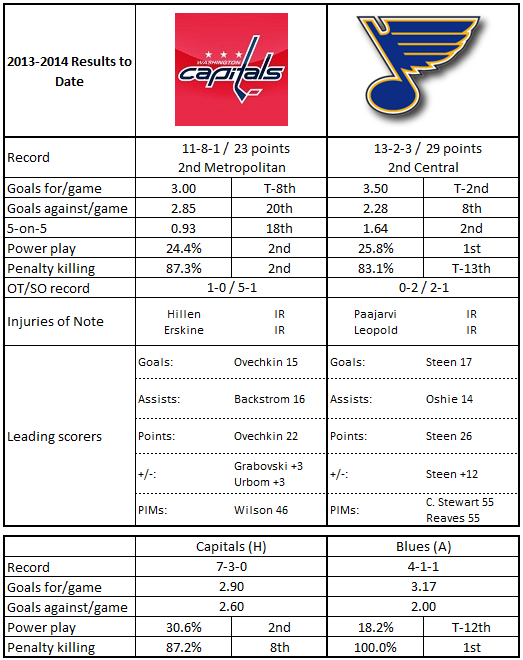 1.  Is possession your thing?  Then the St. Louis Blues are for you.  Only the Chicago Blackhawks have a better ratio of Fenwick for events to those against in 5-on-5 close situations.  And it shows up in how they tilt the ice, shooting wise.  Only Chicago and the Minnesota Wild have higher shares of total shots taken than St. Louis in 5-on-5 close situations (source: extraskater.com).

2.  Talk about your lucky 13’s.  So far this season the Blues have allowed 13 goals in each of the first, second, and third periods of games.  St. Louis is the only team in the league that has a positive margin of five or more goals scored to goals allowed in each period overall this season.

3.  No team in the league has scored first in more games than St. Louis.  Fifteen times in eighteen games they scored first and play to a 12-1-2 record when doing so.

5.  St. Louis is the only team in the league perfect in killing penalties on the road.  They are 15-for-15.  The flip side of that is the frequency.  Only once have the Blues faced more than three shorthanded situations in any of their six road games.  They faced four when they beat Chicago, 3-2 in a Gimmick, back on October 17th.

2.  Bettman’s Folly has been kind to the Caps this season.  Their five wins in six games is tied with Winnipeg for the league lead in wins.  Their 57.9 percent shooting percentage is third in the NHL, led by Nicklas Backstrom, who is 4-for-4 in his attempts so far.

3.  You are probably not surprised that Alex Ovechkin leads the league in average power play ice time per game. What you might not know is that he is averaging more than a minute more (5:06) than that of the next ranked winger, the Islanders’ Kyle Okposo (4:03).

4.  Speaking of power play, Ovechkin and Nicklas Backstrom rank one-two in power play points.  Ovechkin is 7-6-13, and Backstrom is 1-11-12.  The surprise here, though, might be Marcus Johansson, who is tied for 18th (with, among others: Henrik Zetterberg, Henrik Sedin, Joe Thornton, and Mike Green).  He is 1-6-7 on the power play.

5.  There are five teams with two players among the league leaders in shooting with percentages of 20 percent of greater, including Washington.  Joel Ward leads the league at 28.1 percent; Mikhail Grabovski is tied for 18th at 20.7 percent.

Alex Pietrangelo might be the best defenseman you have never heard of.  Such is the problem playing in St. Louis for a team that lacks stars and star quality, despite their superb record.  At age 23, the former first round pick (fourth overall in 2008) is already accomplished.  Since the 2010-2011 season, only four defensemen have more points than he does – Erik Karlsson, Keith Yandle, Dustin Byfuglien, and Kris Letang.  Only Letang and Zdeno Chara have a better plus-minus over that span.

He is not just an offensive defenseman.  Pietrangelo averages more shorthanded ice time (3:21/game before Saturday’s game against Carolina) than any of the aforementioned defensemen, and he has been on the minus side of the ledger only three times in 18 games this season.  On a team whose motto might be “Relentlessly Effective,” Pietrangelo certainly makes his contributions in that regard.  He will be coming into Sunday’s game on a three-game points streak (including the game against Carolina), but what he does not have is a point against Washington in two career appearances.

Hey, you remember this guy, don’t you?  Big, strapping guy, plays right wing and mans the middle on the power play, scored at a 33-goal pace in last year’s abbreviated schedule?  One might be excused for wondering where Brouwer has been.  Since recording three goals in four games in late October, he is 2-1-3, minus-2, in his last 11 games.  He has more penalty minutes (18) than shots on goal (15) in that span, not necessarily what one would expect from a second line winger.  Even more disappointing, Brouwer has one even strength point this season, an insurance goal scored in a 4-1 win over Columbus on October 19th.  Compare that to last season when he had 11 even strength goals and 16 points.

The second line has had some churning at center (Mikhail Grabovski, Brooks Laich, Marcus Johansson) and at left wing (Laich, Martin Erat), but the common denominator has been Brouwer at right wing.  If the second line is going to put an end to having the adjective “disappointing” attached to it, Brouwer is going to have to be heard from.  He is 3-4-7, minus-2, in 16 career games against the Blues.

1.  Space, the final frontier.  Any team coached by Ken Hitchcock is going to play a stifling, hound you all over the ice kind of defense.  Only three teams are allowing fewer shots on goal per game (25.3) than the Blues.  If the Caps are going to win, chances are they are going to have to solve that problem and create some space for themselves.  This is where the second line might have to make a statement.  Assuming that the second line for this game will be Brooks Laich, Martin Erat, and Troy Browuer, that group has a total of 79 shots on goal in 20 games.  Four shots on goal a game from a scoring line means you might get a goal every other game out of it, if their shooting percentage is good.  The Caps need more in this one.

2.  It would be keen to keep Steen from eighteen.  Alexander Steen scored his 17th goal of the season against Carolina on Saturday night, his league-leading fourth game-winning goal of the season (tied with Anaheim’s Ryan Getzlaf and Corey Perry).  And when he scores, the Blues win.  In 13 St. Louis wins this season Steen has at least one goal in 12 of them.  In five losses he scored in only two of them.  In 17 games against the Caps he is 4-5-9, plus-2.

3.  It’s better to be Halak-y than good.  Since Brian Elliott got the call against Carolina it would seem the goaltending chores in this one would fall to Jaroslav Halak.  You remember him, right Caps fans?   Well, he no longer torments the Capitals on a regular basis, but he has assembled a solid record since signing with the Blues after his remarkable 2010 post-season.  In 133 games with the Blues, Halak is 69-40-17, 2.24, .915, with 17 shutouts.  The odd statistic about his 2013-2014 season is that since he faced 30 shots in a 4-2 opening night win against Nashville, he has not faced as many as 30 shots in a game since in 13 appearances and has faced more than 25 shots only five times, once in his last eight games.

This is not going to be a pleasant game to watch, let alone in which to play.  St. Louis is a burlier version of the old New Jersey Devils, almost robotic in their approach to the game, even with the higher-octane offense they have displayed thus far this season.  The Caps can match the Blues, size wise (both teams are likely to start nine skaters weighing at least 210 pounds), but the Blues have a more physical edge to their game (third in total penalty minutes per game, fifth in fighting majors).  These are two teams with identical November records (6-1-1), the difference being that while Washington forged that record after a slow start, the Blues have played more or less at that level all season.  The Capitals have the added incentive of being able to take over the Metropolitan Division lead with a win.  It should make for a an interesting – and an interesting benchmark – game for the Capitals.