The Peerless Prognosticator is ON THE AIR!!! -- Game 28: Hurricanes at Capitals, December 3rd

The Peerless Prognosti –urp- cator is ON THE –belch- AIR!!!

Turkey Day has come and gone, sort of like the Redskins’ playoff hopes.  Lost in a maze of odd recipes and warmed over leftovers.  And frankly, we’re sort of glad it’s over.  You don’t want to spend a Thanksgiving with your idiot cousin who wants to make his contribution to the… oh, hey Cheerless. 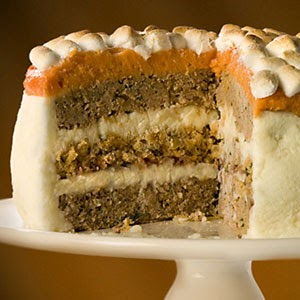 It was interesting, to say the least, and the oyster stuffing ice cream really topped it off.

“My own special recipe.  And whut about the beverage selection?  I coulda gone with some frou-frou white wine, but you have to chill it, and you have to have a corkscrew, and it doesn’t keep.” 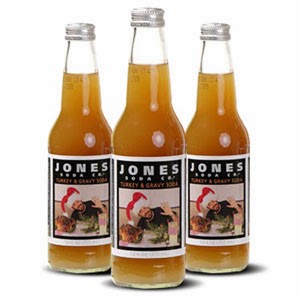 “It’s part of the spirit of the season, cuz… But hey, didn’t you like the dessert?  My own specialty – sweet potato pie.”

It might have helped if you peeled the sweet potatoes… 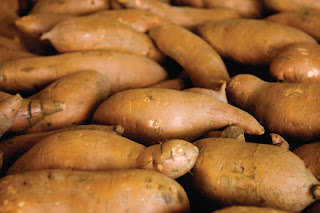 Everyone’s Thanksgiving is different, and no doubt you have your stories to tell, but it is time to get back to hockey, and that means a Metropoutheast Division Matchup with the Carolina Hurricanes on Tuesday night on F Street.

For the Hurricanes it has been a little bit like watching Sisyphus rolling that boulder up the hill only to see it roll back down, leaving him to try once more to get the rock to the top of the hill.  The Hurricanes started the year with a 2-1-1 record, beating the Caps by a 3-2 score to get them over .500.  Then the Hurricanes lost three in a row to set them on a course to finish the month of October with six losses in their last eight games of the month.

The problem is not necessarily defense.  They have had significant health issues in goal.  Cam Ward missed ten games to a lower-body injury.  Backup goalie Anton Khudobin, who beat the Caps in October, has not played since October 13th, he too having suffered a lower-body injury.  Justin Peters filled in admirably and in 12 appearances so far has a 2.49 goals against average (one spot ahead of Henrik Lundqvist in the goalie rankings) and a .920 save percentage (one spot ahead of Ryan Miller and Marc-Andre Fleury).

The problem, such as it is, for the Hurricanes is an inability to score consistently.  Carolina has been held to two goals or fewer in 19 of 27 games so far.  In those 19 games they have a 4-10-5 record, 4-1-5 in one-goal decisions.

Here is how the teams compare in their overall numbers through Sunday’s games: 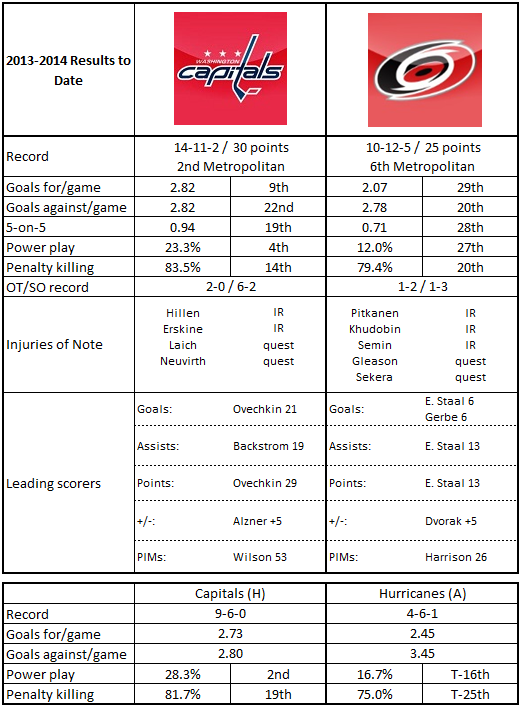 1.  How bad is the Carolina offense?  Nathan Gerbe is tied for the team lead with six goals.  He had three of them in the team’s first four games of the season.  He has three in his last 23 games.  On the good side, one supposes, he has already surpassed his goal total for last season in Buffalo – five goals in 42 games.

2.  How bad is the Carolina offense, part deux… In their last 18 games the Hurricanes have been held to two or fewer goals 14 times.  They are 3-9-2 in those games.

5.  When Carolina is good in possession – really good – they win.  When they are bad – really bad – they lose.  Three times this season the Hurricanes finished with a Fenwick-for percentage in 5-on-5 close situations of 60 percent or better.  They won all three games.  Eight times (eight times??) they were under 40 percent in those situations.  They are 0-6-2 in those games.

1.  Speaking of possession, the Caps had that 0.0 percent Fenwick-for in 5-on-5 close situations against Pittsburgh back on November 20th.  Was it a wake-up call?  Have the Caps turned their possession numbers around?  No.  In five games since the Caps are under 50 percent in three of them, barely 50 percent in another (50.7 percent in the 3-2 overtime win over the Islanders) and 60 percent against the Maple Leafs on November 23rd – a game the Caps lost in a Gimmick.

5.  In 5-on-5 close situations, only five teams have a worse Fenwick-for rate than do the Caps.  Those five teams – Carolina, Columbus, Edmonton, Toronto, and Buffalo – have a combined record of 49-73-15.  The question is not why the Caps are just 14-11-2 a third of the way into the season, but how it is they have that good a record given their possession numbers at 5-on-5.

Eric Staal has points in eight of his last nine games (3-7-10).  But, he is a minus-2 over that stretch, too.  Of 22 even strength goals scored by opponents over those last nine games, Staal was on ice for nine of them.  Only four forwards in the league have been on ice for more goals against, only seven have been on ice for more 5-on-5 goals against.  This is the fourth straight season in which Staal the Elder has found himself in the top-ten among forwards in goals scored against/on ice.  He might have done it in 2009-2010, but he played in only 70 games.  Had he played in all 82, at his pace he would have finished in the top-ten that year as well.  Does he get tough assignments?  Well, he gets favorable zone starts (58.2 percent at 5-on-5).  Is his quality of competition especially stiff?  Not compared to his forward teammates.  Things happen when Eric Staal is on the ice, good and bad.  Pay attention.

Of the six Capitals defensemen having played in ten or more games, only one is a “minus” player – Mike Green (minus-7).  And here is where “plus-minus” needs to be taken with not just a grain of salt but the whole salt lick… Green has the best 5-on-5 possession numbers on the team.  Not best among defensemen… best, period.  At 5-on-5 Green has the best Fenwick-for percentage (52.2 percent), and he has the best Corsi-for percentage (53.5 percent).  The problem is his own.  Among the six defensemen having played in at least ten games, the club’s shooting percentage with Green on ice at 5-on-5 is second worst on the club (7.7 percent; Alexander Urbom is at 7.3 percent).  Seeing how he has no goals in 37 shots at 5-on-5… well, there you go.

3.  Score first.  One of the most reliable indicators of winning in the NHL is looking at who scores first in games – teams scoring first through Sunday’s games had a record of 292-60-52.  But Carolina is one of only three teams in the league not to have lost a game in regulation when scoring first.  Colorado and Chicago are the others.  Granted, Carolina has scored first in only seven of 27 games so far, but still, pretty good company that.

Carolina is not Buffalo-Florida bad, but with just 25 points in 27 games they are not good, either.  Having said that, take them for granted at your peril.  They own a win in the only meeting of the teams to date this season, and the Hurricanes still have more wins in regulation and overtime (nine) than do the Caps (eight).

By the time this game is over the Caps could be just five points behind Pittsburgh for the division lead with a game in hand, or they could fall to third place, just one point ahead of New Jersey, two ahead of Philadelphia, and three ahead of these Hurricanes.  That is how tight things are for now in the Metropolitan Division, and it is what makes earning points the Caps should earn of paramount importance.