The Peerless Prognosticator is ON THE AIR!!! -- Game 37: Ducks at Capitals, December 23rd

The Anaheim Ducks visit the Caps on Monday in the season’s last scheduled game before the Christmas break.  For those of you who have not been paying attention, the season had gone, well, just ducky for the Ducks.  They come to Verizon Center with the league’s best record (26-7-5), including wins in eight straight games as they face the Caps.

It is not even as if this whole streak thing is unusual for the Ducks this season.  Of their 26 wins, 20 of them are accounted for in three streaks – a seven-game streak after they dropped their season opener, a five-game streak to open the month of November, and the eight-game streak they are managing at the moment.

Here is another streak number to keep in mind… five.  Anaheim has won five straight road games.  This will be the last of a four-game road trip for the Ducks that took them from Detroit to New Jersey to Long Island before heading to D.C.  Before that they won road games in Chicago and St. Louis.  The Ducks are a team that lets road games roll off them like water off a…ok, enough of that.

In their eight-game winning streak coming into this game, Anaheim has outscored its opponents 30-16 and allowed opponents more than two goals only once in those eight games.  Ryan Getzlaf has done the most damage in this streak with five goals and six assists.  With 19 goals this season, Getzlaf has already surpassed his goal total for last season (15 in 44 games), his having recorded a hat trick in Anaheim’s last game, a 5-3 win over the Islanders on Saturday. In seven career games against Washington, he is 3-5-8, minus-3.

Where Anaheim has not been special in their winning streak is on special teams.  They are 3-for-18 (16.7) on the power play but have been shut out on their last 13 power play chances over six games coming into tonight’s game.  On the penalty kill the Ducks are 17-for-21 in the eight-game winning streak (81.0 percent).  What they have done lately in minimize opponents’ opportunities, facing only nine shorthanded situations over their last five games. 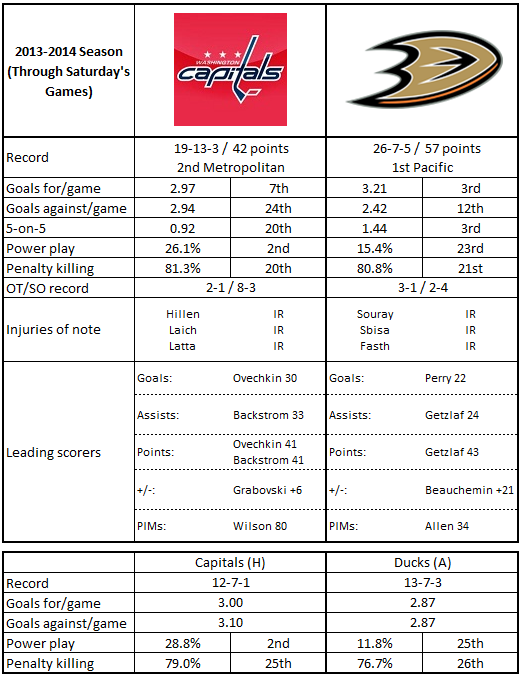 1.  Goaltending has not been as stable as you might expect of a team with points in 32 of 38 games.  Viktor Fasth got the call in the season opener, laid an egg (six goals allowed on 29 shots) and made only five appearances before sustaining a lower body injury, which he aggravated in pre-game warmups on November 22nd.  He has not appeared since.  Frederik Andersen replaced Fasth and had played well, arguable the best Duck netminder this season (9-1-0, 1.87, .932 in ten appearances).  He has two wins in the Ducks’ eight-game winning streak.  Jonas Hiller leads the club in appearances this season (24) and has a solid, if unspectacular record (15-4-4, 2.43, .914, 2 shutouts).  Those numbers are consistent with his career standard to date (2.51, .917 in 300 career games).

3.  Nail-biter or blow-out, Anaheim can beat you either way.  The Ducks have the second-best record in the league in one goal games (13-1-5, second fewest one-goal losses in regulation), and only three teams have more wins by three or more goals than the ten the Ducks have.

5.  One wonders if there is a course correction for the Ducks coming, at least based on their possession numbers.  Anaheim is a rather mediocre team in that regard.  In 5-on-5 close score situations the Ducks rank only 13th in Fenwick-for percentage (51.2 percent), only 16th in Corsi-for percentage (50.1 percent).

1.  Odd Capitals fact… Since the 2004-2005 lockout, the Caps have not lost the last game before the Christmas holiday in regulation time.  They earned points in each of the seven games (4-0-3).

3.  Twelve teams have not lost a game in regulation when leading after 40 minutes this season.  The Caps are one of them (Anaheim is not).

Eric Fehr comes into this game with points in three of his last four games and is quietly putting together a decent season for a skater getting less than 15 minutes of ice time a game (his 82-game pace is 15-27-42).  He spent a lot of time in the doghouse of Bruce Boudreau when Boudreau was coach here, but he does seem to have a knack for contributing in big games.  Both were on display for Fehr and Boudreau as far back as their days in Hershey when Boudreau scratched Fehr for two games, then inserted him in the lineup for a Game 7 against the Portland Pirates in the 2006 Calder Cup semi-finals.  Fehr scored the overtime series-clinching goal, several of these Anaheim Ducks having been on the ice to see it, including Dustin Penner, Corey Perry, and Ryan Getzlaf.  Caps fans will also remember his two goals in the 2011 Winter Classic in Pittsburgh and his two overtime, game-winning goals against Boston last season.  He seems to show up in these games.  And, he’s due.  Fehr has no points in four career games against the Ducks.

1.  Shots.  One thing Anaheim has done in their eight-game streak is keep teams off their goaltenders.  Only once did an opponent register more than 30 shots, and they have allowed only 24.9 shots per game in that streak.  The Caps need to find a way to apply more pressure.

2.  Shots, Part Deux.  Anaheim has the best shooting percentage in the league in 5-on-5 close score situations (11.1 percent).    Meanwhile, the Caps have the seventh highest number of shots allowed in those situations.  That is a combustible mix.  If the Caps don’t find a way to minimize shots, their goalie is going to have to play lights out.

3.  Shots, Part Trois.  The Caps lead the league in shooting percentage at 5-on-4 (19.4 percent), and Anaheim has the sixth worst save percentage at 4-on-5 (.871).  If the Caps get power play opportunities, they are going to have to convert them.

On paper, this game is not close.  Anaheim is the 2009-2010 Caps, complete with the coach.  The Caps are…well, the Caps.  But there are some cracks in the underlying numbers that suggest avenues for the Caps to exploit, particularly on the power play.  If the Caps can net a couple of man-advantage goals, this could be a game.

Programming Note:  This will be our last post until next week.  Cheerless, Fearless, and yours truly hope all of you have a happy and safe holiday.