Calvin: “They say the world is a stage. But obviously the play is unrehearsed and everybody is ad-libbing his lines.”

Hobbes: “Maybe that’s why it’s hard to tell if we’re living in a tragedy or a farce.”

It is a measure of just how bad the 2012-2013 season was for the Washington Capitals’ Brooks Laich when you consider that the 2013-2014 season was a vast improvement on it.  Laich played in almost six times as many games (51 to 9), scored eight times as many goals (8 to 1), had almost four times as many points (15 to 4), and was one of three Caps to record a power play, an even strength, and a shorthanded goal this season (Nicklas Backstrom and Joel Ward being the others).

There was not much for Laich to like about his season (ok, there was this).

Even when he was relatively healthy (“relatively” being the operative word there, since he was never really “healthy” this season), he was unproductive.  In three full ten-game segments he had no more than three points in any of them.  He started the season poorly (3-2-5, minus-9 in his first two ten game segments) and ended it broken with only six games in his last ten-game segment played (2-1-3, minus-6) before retiring for the last 14 games of the season to undergo surgery to correct his chronic groin problem.

Laich is expected at this point of his career to be a core element to the Caps.  After all, over a five-year period, from 2007-2008 through 2011-2012 he missed a total of just four regular season games, scored 101 goals, recorded 238 points, had 38 power play goals, recorded at least one shorthanded goal in each season, all while averaging more than 17 minutes a game.  This season he still averaged more than 17 minutes per game, but those 15 points were the same that Ville Leino had in Buffalo (ok, Leino’s were all assists) in roughly as many games (Leino played in 58 games).  For Brooks Laich, on the ice, at least, it was not a season for the scrapbook. 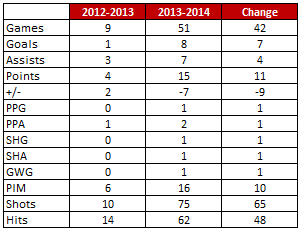 Fearless’ Take… Laich might have been most productive when he was at his nadir of the season, physically.  He was 3-3-6 in seven games before ending his season after skating just 12 minutes against Vancouver on March 14th.

Game to Remember… February 27th versus Florida.  Through 44 games in the 2013-2014 season Brooks Laich was struggling along with a 5-4-9 scoring line.  He did not have a multi-point game in any of those 44 contests, and he was just 1-1-2 in his previous 16 games.  In the first game after the Olympic break, though, Laich broke out.  It started with when Laich picked up an assist helping to dig out the puck from the top of  crease to give Troy Brouwer a chance to slam it behind goalie Tim Thomas.  Less than three minutes later the Panthers turned the puck over at the Capitals’ blue line.  Dmitry Orlov intercepted a pass and fed Alex Ovechkin heading up the left wing.  After crossing the blue line and drawing the defense to his side of the ice, Ovechkin fed Laich on the right side for a one-timer that beat a sprawling Thomas.

Florida climbed back into the game, though, tying the contest at 4-4 just over nine minutes into the third period.  That left things up to Laich and Ovechkin once more.  It started as the Caps’ second goal did, with a Panther turnover, this time at their own blue line.  Nicklas Backstrom picked up the puck and fed it forward to Laich.  It would be Laich returning the favor to Ovechkin, laying the puck out for his one-timer at the 15:43 mark to give the Caps a 5-4 win.  It was Laich’s first multi-point game since going 1-1-2 in a 4-2 win over Florida on April 5, 2012.

Game to Forget… January 19th versus New York Rangers.  When Brooks Laich took the ice for the Caps in Madison Square Garden on a Sunday evening and before a national television audience in January, it was the 600th time he did it in the regular season for the Caps.  He was coming off a thoroughly forgettable 600th NHL game in Columbus two nights earlier (he played one game for Ottawa in 2004) and was presented an opportunity to shine on a larger stage. Things did not work out as Laich or the Caps might have hoped.  The Rangers scored three times in the first 18 minutes and nipped the momentum of a first minute goal in the second period by the Caps in the bud by scoring one of their own less than two minutes later.  For Laich it was another thoroughly forgettable night – no shot attempts, no hits, no takeaways, a minus-1, and he lost 10 of 14 draws in 15:38 of ice time.

In seven seasons after the 2004-2005 lockout, everything was methodical and predictable in the career of Brooks Laich.  He would play a lot of games (averaging 79 games a season), become a reliable 20-goal scorer, fill in at forward position, play in any situation.  Then he became a “Flyer,” and things got turned upside down.    Ever since he has been struggling to overcome injuries that sapped him of his production and durability.  One might admire his grit to play through those problems, but we are left with the hope that the surgery he had in the spring will return him to the production he enjoyed before his dalliance with being a Flyer that turned his career with the Caps into part tragedy, part farce.

Quotes from the mind of Bill Watterson