On April 2, 2013, the Washington Capitals announced that they signed free agent defenseman Nate Schmidt to a two-year entry level contract.  Schmidt had just completed his third year with the University of Minnesota Golden Gophers. In that final season Schmidt was a second team All-American, a Western Collegiate Hockey Association first team selection, led the WCHA in scoring among defensemen, finished third nationally in scoring among defensemen, and was an All-WCHA Academic Team selection.

Schmidt dressed for eight games with the Capitals' AHL affiliate in Hershey to wrap up the Bears’ regular season (1-3-4, minus-4), then appeared in five games in all five games of the Bears’ first round loss to Providence in the Calder Cup playoffs (0-2-2, plus-1).

Not a bad beginning. Not good enough to make the Opening Night roster, but he was recalled on October 11th. That would start a run of 28 consecutive appearances for Schmidt in the Capitals’ lineup. He seemed to improve over time, or at least his numbers did. He was just 0-3-3, even, in his first 22 games. The, over a four-game span from November 30th through December 8th, he was 2-1-3, plus-4, in 18 and a half minutes of ice time a game. The Caps were 3-1-0 in those games.

However, his run came to an end on December 10th, getting held off the score sheet in a 6-5 overtime win over Tampa Bay. Then he was shut out again in his next game. Then he sent down to Hershey for more than five weeks. After returning to the Capitals and the lineup on January 21st, a 2-0 loss to Ottawa in which Schmidt played 11 minutes and change, he was sent down to Hershey once more where he finished his season (missing a month to a knee injury).

Schmidt was one of the early contestants for that third defensive pair for the Caps. As it was, he finished eighth in games played among the defensemen (29), tied for sixth in points (6), and second in plus/minus (plus-4 to the plus-7 of Steve Oleksy, another second half demotion).

In a sense, Schmidt was the caretaker for the left defense position Dmitry Orlov would later occupy. He spent more time skating with Mike Green at 5-on-5 (232 minutes) than any other defenseman, almost 150 more minutes than he skated with John Carlson (87 minutes), the defenseman with whom he spent the next highest amount of time.  You will recall that Dmitry Orlov, who played all of his games after Thanksgiving, also played most of his ice time alongside Green. 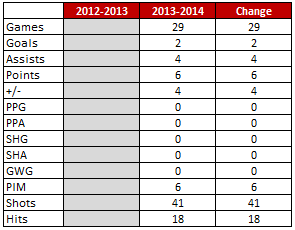 Odd Schmidt Fact… Nate Schmidt is the only defenseman in Capitals history age 22 or younger to post consecutive games of plus-3 or better.  He did the trick on December 7th and 8th in games against Nashville and the New York Rangers.  He scored his first and second NHL goals in those games.

Game to Remember… December 7th versus Nashville.  You always remember your first.  Nate Schmidt’s first NHL goal came on December 7th against the Nashville Predators.  The Caps had a 3-1 lead early in the third period when the Caps took a faceoff in the Nashville zone to goalie Marek Mazanec’ left.  Neither Paul Gaustad nor Joel Ward could win the draw cleanly, and it was Martin Erat kicking the puck free to the boards.  Erat collected the puck and circled into the corner.  From that perch he spied Schmidt at the opposite point and saucered the puck out to him.  Schmidt settled the puck and leaned into one, firing a slap shot past Mazanec’ blocker and off the far post for his first NHL goal in a 5-2 Capitals win.

Game to Forget… October 26th versus Calgary.  The Caps dragged themselves from a 2-5-0 start to 5-5-0 off a three-game winning streak when they headed to Calgary in late October.  The got off to a bad start just 64 seconds in when Kris Russell scored for the Flames.  Six minutes later the Flames scored again when Sven Baertschi skated the puck into the zone, backing Schmidt off in doing so.  Baertschi tried to feed Jiri Hudler on his right, but the puck was deflected off Martin Erat’s stick.  The puck pinballed to the crease and before Schmidt could find a Flame to defend, Hudler swooped in an batted in a rebound of a Sean Monahan shot.  Schmidt earned an assist on an Aaron Volpatti goal in the second period to get the Caps to within 3-2, but in a four minute span of the third period Schmidt was not able to fight through T.J. Galiardi to prevent a shot from Mike Cammalleri at a difficult angle that eluded goalie Michal Neuvirth, then he was left on an island as Calgary effected a 2-on-1 deep.  Matt Stajan found Curtis Glencross for the one timer before Schmidt could slide across to try to block the shot, and Calgary had a 5-2 win.

This might be one of those instances in which your lying eyes were in fact lying, at least a little bit.  Schmidt had a decent rookie campaign, but he had help.  He was “Part I” of the left defense partnership with Mike Green, manning that spot for a large chunk of the first half of the season.  However, his underlying numbers were not as impressive, and they weakened more when apart from Green.  That seems entirely understandable for a rookie free agent defenseman who was playing NCAA hockey six months before he dressed for his first game with the Caps.

Schmidt is also revealing in another respect, and not a flattering one to the organization.  Was he that much of a diamond in the rough to merit almost 19 minutes a game, or was it a case of his being the best the Caps had for the position given the lack of depth in the system at the position?  We suspect it is the latter, which is no reflection on Schmidt or his potential.  Perhaps it would have been better for him to spend the entire season at Hershey.  Perhaps not.  Schmidt had the kind of season where at the end we are still trying to figure out who he is.

Well, turns out both Nate Schmidt (29 games) and Dmitry Orlov (54 games) played most of their time alongside Mike Green, a lot more than each of their respective number two ice time partners. And those were their combined numbers (Orlov having better ones than Schmidt). Not all that bad for a couple of young guys in that position, just 148 games of experience between them at season’s end.

On the other hand, maybe Mike Green, as the common denominator, wasn’t a bad mentor.