Rarely do three games cover such a range of play as those that the Washington Capitals played in Week 8.  A close-fought game settled in overtime against the New York Islanders, a blowout in the rematch, and then a game that seemed to be an utter waste of the jet fuel used to transport the team to Toronto in a loss to the Maple Leafs.  It was a week that had something for everyone, unless you were looking for another winning week. 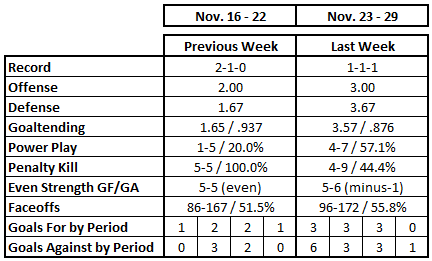 The Caps just cannot seem to get any traction. Since opening the season with a pair of winning weeks, they have failed to put together consecutive winning weeks in any of the six that followed, including Week 8.  In fact, they have not had consecutive anything weeks since Weeks 1 and 2.  A .500 week (standings points), a losing week, a winning week, a losing week, a winning week, and a .500 week this past week.  It could have been another week that looked really good in retrospect.  The Caps opened by losing to the Islanders in overtime, a game out of which, quite frankly, they did not really deserve a standings point.  They pasted the Isles in the rematch two nights later.  That set the Caps up for what could have been their best week since Week 2 (2-0-1).  They came out flat against the Maple Leafs and never really challenged in a 6-2 loss, dropping the Caps into fourth in the Metropolitan Division and tenth in the Eastern Conference. 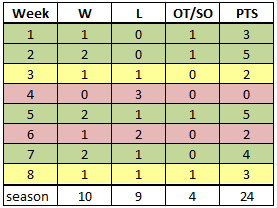 It was not a bad week for the Caps at the offensive end, but neither was it a good one.  What it was, was unbalanced.  Seven different Caps shared in the nine goals, but three of them were scored by Alex Ovechkin, including getting goals in consecutive games for the first time since Games 2-4 of this season.  Six other players had a goal apiece.  Ten different players had points, but of the seven of those players who had assists, Nicklas Backstrom and Matt Niskanen dominated with five and four, respectively.  And, neither had a goal.  Four players recorded at least one goal and one assist – Marcus Johansson, Troy Brouwer, Tom Wilson, and Evgeny Kuznetsov – but only one (Johansson) had more than one of one or the other (goal, two assists).

It was a deceptive week for the Caps in the defensive end of the rink.  Looking at the numbers from a high level, holding teams to an average of 28.7 (27.0 in regulation time) shots is a decent week.  However, the Caps allowed only 23 shots in their 6-2 loss against the Maple Leafs.  More to the point, the Caps allowed 60 shots in the first and second periods of games, an average of ten per period.  Drilling a bit further into the numbers, the Caps had middle-of-the-road decent Corsi numbers for the week at 5-on-5 (49.52 Corsi-for percent).  However, when tied, the Caps had a Corsi-for percentage at 5-on-5 of 44.00 percent and were a minus-15 overall (numbers from war-on-ice.com).  The odd part of that statistic at first blush was that the Caps did not have their worst game against the Maple Leafs.  That can be explained away by spending so little time tied (14:15 in total time).  Their worst game was the first game against the Islanders, one in which the Caps were minus-19 with a Corsi-for percentage of 37.92.   The Caps were not able to keep the rink from being tilted in their direction when the decision was in the balance, and they really were fortunate to get that single standings point.

It could have been a good week.  In the first two games of the week, Braden Holtby stopped 54 of 58 shots in regulation time, a .931 save percentage.  One would be happy with weeks like that.  Unfortunately, there was the overtime against the Islanders, one that the Islanders spent in the Caps’ zone, in no small part due to a power play that led to the game-winning goal.  Then there was the tire fire against the Maple Leafs in which Justin Peters started, was yanked after the first period after allowing two goals on six shots, then going back in for the third period after Holtby allowed three goals on 12 shots in the middle frame, only to allow another goal on five shots.  Even playing only 40 minutes, it was the fifth straight appearance in which Peters allowed three or more goals (.859 save percentage).   It made for an unbalanced week, despite the balanced win-loss record.

Week 8 might have been the Caps’ best power play week of the season.  First, it was their best week in terms of conversions.  In making good on four of seven chances, the Caps recorded their first 50-plus percent week of the season (57.1 percent).  It tied their high for goals scored (Week 5: four goals on ten opportunities).  Then there was the efficiency.  The Caps scored their four goals on 13 shots.  Seven different players shared in the shots, four of them in goals.  Ovechkin had two goals on three shots against the Islanders in the first game of the week, the only power play shots on goal for the Caps in that game.  Andre Burakovsky scored on his only power play shot on goal, a tip-in of a Matt Niskanen drive.  Troy Brouwer got the fourth power play goal of the week on a one-timer from the middle of the 1-3-1.  When you add in that the Caps recorded their 13 shots on goal in just 9:34 of power play ice time (1.36 shots per minute), it was about as good a week as one could draw up. 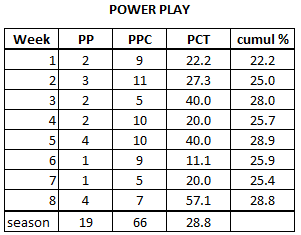 If the power play went as one might draw it up, the penalty killing was the same. If it was drawn up by kindergartners on a Hallowe’en candy rush.  The Caps had their first below-50 percent week on the PK in Week 8.  The odd part was, the Caps did almost everything right.  They limited chances, nine shorthanded situations faced for the week.  They limited shots, ten in nine opportunities.  They were stingy on a shots-per-minute basis, 0.55/minute for the week.  There were two problems.  First, there was that penalty taken against the Islanders in overtime of a 2-2 game.  Iffy as the penalty might have been (it was), killing penalties at 3-on-4 is a different animal from 4-on-5, and yet the Caps still came within two seconds of killing of that penalty and perhaps sending the contest to the Gimmick.  The game against Toronto was just generally awful.  Justin Peters allowed goals on both power play shots he faced; Braden Holtby allowed one on the three shots he faced.  The penalty killers were efficient, but they (including the goaltenders) were not effective. 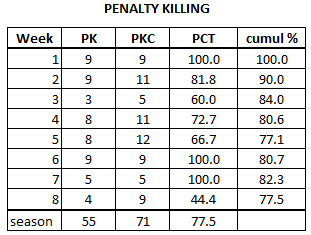 Scoring even-strength goals had become almost as rare an occurrence in Washington as John Boehner and Nancy Pelosi having lunch at Ben’s Chili Bowl.  Failing to score an even strength goal against the Islanders in the first game of the week, the Caps went 18:27 into the rematch before Marcus Johansson scored the first even-strength goal for Washington in 148:59.  And even with that, the Caps gave both that goal and the power play goal they scored earlier back with two even strength goals allowed in a span of 66 seconds after Johansson’s goal.  It was part of a big night for the Caps – four goals on 23 even strength shots – but that was sandwiched around games in which the Caps went 1-for-53 shooting at evens (1.9 percent).  It made for a disappointing week even as the Caps held their opponents to 8.0 percent shooting (6-for-75).

First periods were consistent for the Caps, and not in a good way.  Washington allowed two goals in each of the games’ first periods for Week 8.  It is hard to win in the NHL when trailing at the first intermission, and the Caps lost both games in which they trailed after 20 minutes.  This is part of what is a slow and disturbing trend for the Caps.  They have allowed the 12th-most number of first period goals this season, which is largely negating some good first period work at the other end (tied for sixth in first period goals scored: 22).

Three games in four nights did not agree with the Caps, especially when the back-to-back portion of it came on the second half of the four nights, the second game of which was on the road, and at the end of a holiday week (these guys have lives, too, that might have their own brand of hectic activity).  Games like the one against the Maple Leafs are going to happen, one of those 20 games in a season that a club is going to lose, no matter what.*

It was that game against the Islanders to start the week that was disappointing.  The Caps were fortunate to get out of that one with a standings point, which makes one wonder what might have happened had they playing the Islanders more evenly in terms of possession.  It ended up being a week in which issues the team had coming into the week remained issues at the end.  First, there is the lack of rhythm on a game-to-game basis.  The Caps have not put together consecutive winning weeks over the last six weeks and have a modest three-game winning streak as their longest of the season.

Then there is the backup goaltending.  Justin Peters has not provided the capable relief that the Caps are going to need if they are to keep from riding Braden Holtby into the ground down the home stretch of the season if the Caps are fighting for a playoff spot.  Peters had not had an inordinate amount of time off between appearances – two games/five days to start the season, after which it was one/four, two/eight, two/seven, two/six, two/seven.  With his appearance against Toronto it was five games off and 14 days, his longest stretch of inactivity of the season.  If his performance does not improve, this might be a preview of things to come.