The Peerless Prognosticator is ON THE AIR!!! -- Game 68: Rangers at Capitals, March 11h

Call it “Hump Game,” if you will.  The Washington Capitals host the New York Rangers on Wednesday (“Hump Day”) in what is the middle game of their five-game home stand at Verizon Center.  The Caps will be looking to get over another “hump” of sorts, that being the Rangers themselves.  Since Game 7 of the opening round of the 2009 playoffs, won by the Caps, 2-1, Washington is 9-10-1 against the Rangers in the regular season (2-4-1 in their last seven games at home), and they have dropped two of three playoff series to the Rangers, both in seven-games.  That regular season record includes a 4-2 loss to the Rangers in New York on December 23rd.

Meanwhile, the Rangers went into their Tuesday night game against the New York Islanders as a team on a roll.  Since losing consecutive games to the Islanders and the Montreal Canadiens in late January, New York has earned points in 16 of 18 games (13-2-3) and climbed to within three points of first place in the Metropolitan Division after being seven points out when they started their run in late January (they hold four games in hand on the first-place Islanders).

On an individual level, both the Rangers and Caps have a dominant goal-scorer.  Alex Ovechkin leads the league in goals (44) and has 30 goals in his last 35 games (a 70-goal scoring pace over a full season), while the Rangers’ Rick Nash is second in league goal-scoring (38).

Nash has already recorded more goals than he has in any season since posting 40 in 2008-2009 with Columbus. He is a hat trick away (perish the thought) from tying a career-best 41 goals, set with Columbus in his sophomore season in 2003-2004.  He has not been especially hot lately, though, having scored one goal in his last six games despite recording 22 shots on goal.  In 16 career games against Washington, Nash is 12-8-20, plus-2.  His 18.2 percent career shooting percentage against the Caps is his third best against any team against which he has appeared in at least ten games.  Only against Buffalo (20.3 percent) and Ottawa (18.8 percent) has he been better.

The Rangers are just one of three teams with five defensemen on their roster having recorded at least 15 points this season (the Caps and Nashville are the others).  It might surprise one to know that the defenseman leading that group for the Rangers is Kevin Klein (no relation).  His nine goals and 26 points are career highs in each category; his 17 assists ties a career high set with Nashville in 2011-2012.  Klein has been somewhat dormant of late, though.  After posting points in five straight games in early February, he is 0-1-1 in his last nine contests.  He has ramped up his shooting of late, however, recording eight shots on goal over his last three games after recording four over a nine-game stretch and no more than one in any of them.  In six career games against the Caps, Klein has yet to record a point.

When a Ranger goaltender posts season numbers of a 2.33 goals against average and a .921 save percentage, you would be tempted to conclude, “yeah, another decent Henrik Lundqvist season.”  Except, those are the season numbers for Cam Talbot in 26 games thus far, the last 15 of those appearances (he was spelled once by Mackenzie Skapski) as the Rangers number one netminder.  Talbot took over those responsibilities when Lundavist was struck it the neck by a shot from Carolina's Brad Malone in a 4-1 win on January 31st after teammate Ryan McDonagh's stick pushed up his goalie mask to expose his throat.  Since taking over for Lundqvist, Talbot has not been spectacular (2.44, .917), but he has won (10-2-3 with two shutouts).  He has one career appearance against the Caps, allowing three goals on 34 shots in a 32 Caps win on December 27, 2013. 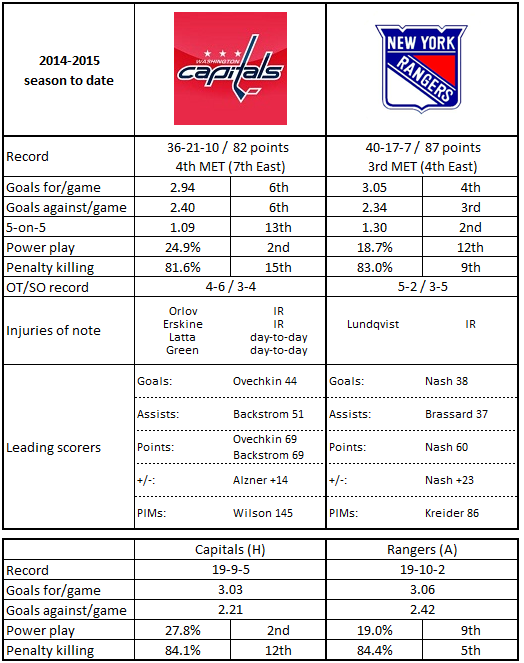 2.  New York seems to play well with others in one respect.  They have the fifth-fewest number of minor penalties called against them this season (207).

5.  Is there a correction somewhere in the Rangers’ future?  Their Corsi-for/Fenwick for percentages at 5-on-5 are rather mediocre (50.6/17th-ranked Corsi; 50.4/14th-ranked Fenwick).  In close score situations they are not much better (50.9/15th-ranked Corsi; 51.0/18th-ranked Fenwick).  Maybe it’s a PDO thing, specifically the save percentage component.  At 5-on-5, the Rangers’ PDO is 101.6, third-best in the league; in close score situations it is 101.8, best in the league.  The save percentage component of that in overall and close score situations (93.0/93.3) rank fifth and third, respectively.  The Rangers rely a lot on goaltending from a possession numbers perspective (all numbers from war-on-ice.com).

1.  Here is an odd one… Four Capitals have recorded at least one point on both the power play and shorthanded.  Two of them are defensemen: John Carlson and Matt Niskanen (Troy Brower and Eric Fehr are the others).

2.  Tom Wilson does not seem quite as ornery at home as he does on the road.  Of Wilson’s 145 penalty minutes, 52 were earned at home, and of his 11 fights, only four were on Verizon Center ice.

4.  Alex Ovechkin leads the Caps in goals scored in the Metropolitan Division (14).  You probably knew that.  Know who is second?  Eric Fehr (10).

What a road well-traveled by Dominic Moore.  In 2000 he was a third-round draft pick of the Rangers, taken 95th overall after his freshman year with Harvard University.  After completing his four-year career at Harvard, he played in parts of two seasons with the Rangers before a rather active day in 2006.  On July 19th of that year Moore was traded by the Rangers to Nashville for Adam Hall, and then the Predators traded Moore on the same day to the Pittsburgh Penguins with Libor Pivko (how’s that for a hockey name?) in exchange for the Penguins’ third round pick in the 2007 entry draft (Nashville took Ryan Thang, who played one game in the NHL…so did Pivko, for that matter).  The following February, Moore packed his bags once more, traded to Minnesota for the Wild’s third round pick in the 2007 entry draft.  In January 2008 he was a waiver claim by the Toronto Maple Leafs.  Moore lasted more than a year in Toronto...barely.

In March 2009 he was traded to Buffalo as a rental for a second round draft pick.  He was a short-timer in Buffalo, heading off to Florida in October as a free agent.  Florida traded him to Montreal in February 2010 for a second round draft pick – another rental deal – after which Moore signed as a free agent by Tampa Bay that summer.  In February 2012 he was traded to San Jose with a seventh-round draft pick for a second-round pick in 2012.  In July 2013 he returned “home,” so to speak, signing with the Rangers as a free agent.  Drafted, traded, waived, signed as a free agent.  It’s sort of the “Dominic Moore Hat Trick, plus one.”  He has 667 regular season games played at ten stops (the Rangers counted twice) and another 69 post-season games played for five different teams (again, the Rangers counted twice).  Oddly enough, for a player as well traveled as Moore and with so many games under his belt, he has only 29 career regular season games played against the Caps (tied for 87th most since 2003-2004, his first year in the league).  He is 3-7-10, minus-3, in those 29 games.

Once upon a time, Evgeny Kuznetsov was thought to be a potential contender for the Calder Trophy as the league’s top rookie.  That was before Nashville’s Filip Forsberg took the trophy by the throat and ran away with it (with apologies to Johnny Hockey) and before Kuznetsov was shuttled up and down the forward lines, playing anywhere from the top line to the fourth line (where he has spent more time lately, only once cracking 12 minutes in his last six games).

Still, with all the shuttling around and the attention paid to rookies elsewhere, Kuznetsov is 11th in rookie scoring (6-19-25) and eighth in assists.  Those numbers are, however, disappointing after an abbreviated inaugural campaign in which he was 3-6-9 in just 17 games at the end of last season.  It has been more than a month since he last scored a goal (February 5th against Ottawa), and he has just one point in his last 11 contests.  He and fellow rookie Andre Burakovsky (the surprise that Kuznetsov was not, although he is in Hershey at the moment) have combined for a 15-31-46 scoring line, what folks might have thought Kuznetsov could accomplish on his own this season.  In that respect, one hopes that Kuznetsov can find the spark (and deployment) to improve his production in time for the playoffs.  In one career game against the Rangers (December 23rd this season, a 4-2 Rangers win), he has one goal.

The Rangers have two sets of back-to-back games in a space of six days, starting with their Tuesday night contest against the Islanders.  As emotional as games in that rivalry can be, especially since it is the last Ranger visit to Nassau Coliseum, Ranger coach Alain Vigneault might choose Mackenzie Skapski to start in goal against Washington if Talbot plays against the Islanders.  Skapski is in his first year of pro hockey after four years in Canadian juniors.  He was 12-7-3 with Hartford in the AHL (2.38/.914/2 shutouts), but he has just one NHL appearance, that a 24-save effort in a 3-1 Ranger win over Buffalo on February 20th.  Then again, with the Rangers playing Buffalo and Florida in the weekend back-to-back, Skapski might be held back for one of those games.

Whoever is in goal for the Rangers, the Caps have to deal with some unpleasant recent history against this team.  There is a special urgency in this in that the Caps might face this team (again!) in either the first or second round of the post season.  It will be the first of three meetings between the clubs over the next month, perhaps providing a glimpse of what to expect if the teams should meet in the playoffs.