For the Capitals, Everything Changes but the Ending 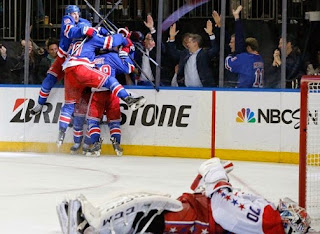 May 13th.  That is a date that should have meaning for Caps fans, although we guarantee they will not like the reason. Last night, the night of May 13th, the Caps lost Game 7 of their Eastern Conference semi-final match against the New York Rangers.  It is the third time in the last six trips to the post season that the Caps were eliminated on that date.  They dropped a 6-2 decision to the Pittsburgh Penguins on that date in 2009 in a Game 7; they lost to the Rangers by a 5-0 margin on that date in 2012 in a Game 7.

In fact, in the 40 year history of the franchise, the Capitals have played hockey past May 13th only twice.  Once was in their 1998 run to the Stanley Cup final; the other was in 1995, when the playoffs started later than usual owing to a lockout that delayed the start of the season.  Perhaps fittingly, the Caps lost all three games played after May 13th that year, Games 5, 6, and 7 of their first round series against the Pittsburgh Penguins, blowing a 3-1 series lead and bowing out in seven games.

Every year is different, every team is different, but for the Capitals it always ends the same way, a loss before the trees have filled in from their long winter nap.  One supposes, perhaps, that this year can honestly be considered different.

One could say that the team the Caps iced for Game 7 against the Rangers last night is not as accomplished as the one that went to the Stanley Cup final in 1998, but it is younger and with more promise than that team.

One could say that it did not go as far as the 1990 team that reached the Prince of Wales Conference final, but neither is it one whose success is largely built on an incredibly hot and incredibly unexpected streak by a heretofore (and ever after) little known player.

But we have been here before, too.  We were here in 1986 when the Caps had young, up and coming stars such as Scott Stevens and Bob Carpenter to support stars entering their prime in Mike Gartner, Rod Langway, and Bengt Gustafsson.  We were here in 2008 when Alex Ovechkin, Nicklas Backstrom, Mike Green, and Alexander Semin were the up-and-comers pushing veterans like Michael Nylander (later Sergei Fedorov after Nylander went down to injury) and Tom Poti.  We were here when the Caps promoted the fact that they had so many first round draft picks in their lineup (that 2008 team had no fewer than a dozen former first round draft picks dress for them).

Now, we can see our way to a view that says Evgeny Kuznetsov and Andre Burakovsky will go into next season with a full season of NHL hockey under their belts, and they (and the team) will be much better for it.  We can imagine a team with these up-and-comers matched to stars who remain among the best in the game at their respective positions in Alex Ovechkin and Nicklas Backstrom.  We can see in the distance a bevy of additional talent that might make their contributions down the road -- Jakub Vrana, Madison Bowey, Philipp Grubauer, Riley Barber.  We can conjure a vision that this is not a team coached by first-timers behind an NHL bench, that the team is being led by coaches who have been though the best and the worst, and know how to get players to row together as a team instead of pulling in different directions individually.

But we’ve had those visions before, too.  And we can be snapped back into reality in an instant.  That 1986 team rolled through the regular season to finish with a then-record 50 wins and 107 standings points, and swept the New York Islanders in the first round of the playoffs.  They were less than three minutes from taking a three-games-to-one lead against the New York Rangers in the second round when Bob Brooke scored with 2:35 left in regulation to tie the game, then scored less than three minutes into overtime to tie the series, the only playoff overtime goal he would score in his career.  The Rangers swept the last two games of that series, and the Caps’ best team to that point and arguably best chance to win a Stanley Cup was left in shreds.

That 2008 team steamrolled its way through the last half of the season, posting a 37-17-7 record after Bruce Boudreau replaced Glen Hanlon as head coach, including an 11-1-0 record to close the season to reach the playoffs.  Then they came back from a three-games-to-one deficit against the Philadelphia Flyers and a 2-1 deficit in Game 7 to force overtime.  Then, hope became despair and then anguish in what seemed like an instant.  A tripping penalty put the Flyers on a power play, and even with that, the Capitals almost killed off the two minutes shorthanded.  Almost.  With just nine seconds left on the penalty, Joffrey Lupul put back a rebound that goalie Cristobal Huet looked for in a different direction, and the opportunity passed for the Capitals.

Virtually the same team reached the post season the following year and got a taste of what it was to win that moment, to turn an anxious one to a joyful one, when Sergei Fedorov took a pass from Matt Bradley, sped down the right wing wall as the minutes were dwindling to a few in a tied Game 7 against the New York Rangers.  When he got to the right wing faceoff circle he slammed on the brakes and snapped a shot into a space perhaps a foot square over the left shoulder of goalie Henrik Lundqvist to send fans into pandemonium and the team into the next round.

And there, they would find despair once more in a moment that appeared and disappeared in a blink.  Against perhaps their most hated rival, the Pittsburgh Penguins, the Caps fought to a split of the first six games, winning the sixth game of the series in overtime in Pittsburgh to force that Game 7 on home ice.  And then the moment came, three minutes into the contest.  A blocked shot, a breakaway, the puck on the star’s stick, a crowd coming to its feet…the shot, turned away.  A moment presented itself and then was gone in a game the Caps would never contest from that point further.

This year, the moment came late in what could have been a series-clinching game, one that would send the Caps to the conference final for only the third time in their 40-year history.  They scratched out a goal mid-way through the third period for the only score of the contest to that point, and then tried to nurse that slim lead for the last nine minutes.  Then the moment came, n innocent dump in from just outside the blue line by the Rangers.  Defenseman Brooks Orpik tried to bat the puck out of the air and back into the neutral zone, but missed.  The puck ended up on the stick of Derek Stepan, who dropped it back to Chris Kreider, and from one knee he fired a shot that somehow threaded its way past a screen and past Braden Holtby into the net to tie the game.  It was a game the Caps would lose in overtime, on another seeing-eye shot that deflected off defenseman Tim Gleason and past Holtby.  The moment came…the moment passed.

This morning, Caps fans will wake up with the idea that although the team failed to advance past the second round once more, there lies promise in the future for what this team accomplished, the devotion it has among players and coaches to playing the “right way,” and for the blend of young and veteran talent they will bring to camp in the fall.

However, there is still that ending, there is still that inability to grab hold of that moment that presents itself.  For the Caps, it is almost always one that slips through their fingers, to be taken up by their opponent.  It was true 30 years ago, and it was true last night.  Perhaps things will be different next season, or the year after that.  There is not a Capitals fan anywhere who wishes for anything else.  But for now, we are left with a bitter truth about this franchise.  Ownership changes, front office personnel changes, players change, new fans replace old, but every year ends in the same sad way, and that is what is so frustrating and agonizing, the sameness of it all.

The utter sameness of it all.

My thoughts exactly. Thanks for all of your efforts -- I always enjoy your writing.