“All the things one has forgotten scream for help in dreams.”
-- Elias Canetti

The comings and goings in 2014-2015 did not occur as frequently as the departures and arrivals last season.  In fact, the roster movement of players in and out of the organization took place in a very small window of time, 48 hours to be exact.  On February 28th, the Caps sent defenseman Jack Hillen and a fourth-round draft pick to the Carolina Hurricanes for defenseman Tim Gleason.  The next day, the Caps sent second- and third-round draft picks to the Calgary Flames for forward Curtis Glencross. 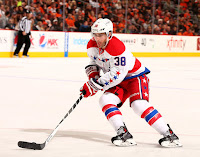 Jack Hillen might be the most star-crossed player for the Capitals in recent memory.  In his first season with the club, he last six shifts into his first game before he was knocked out of the contest (and for almost two months out of the lineup) with a shoulder injury.  In his second season with the club, he made it to the second game of the season – barely.  He skated three shifts against the Calgary Flames before he broke his leg on a check from Lance Bouma.  That injury cost Hillen five months of the season.  Then, in March 2014, he was concussed after colliding with teammate Alex Ovechkin and missed the last nine games of the season.

This season it was not injuries as much as the newly acquired depth the Caps had on the blue line that kept him out of the lineup.  He appeared in just 35 of the Caps’ first 67 games before being sent to Carolina where he (of course) was injured, a concussion that cost him the last 19 games of the season. It was unfortunate for the Caps, since Hillen was not a bad depth defenseman.  In 71 games with the club he was 3-12-15, plus-6.  His possession numbers did leave something to be desired, though.  He managed a Corsi-for percentage at 5-on-5 above 50 percent in his first season with the club (51.2), but he was well under that threshold in his last two seasons (42.9/47.4), and his Corsi percentage (relative) was similarly unimpressive over time (+0.6/-5.9/-4.6).

You might have thought swapping out Jack Hillen for Tim Gleason was a trade of a brittle, puck-moving defender for a sturdy, physical presence on the blue line.  You might want to rethink that.  Since playing in 82 games in the 2011-2012 season with the Hurricanes, Gleason appeared in 98 of a possible 130 games the next two seasons.  This year he dressed for 55 of 60 games with Carolina before he was traded to Washington.  He appeared in 17 of 19 games for the Caps, and his numbers painted an discouraging picture.  He contributed virtually no offense (two assists in 17 regular season games), which was not unexpected.  However, his underlying numbers were mediocre despite getting third pair minutes.  His Corsi-for percentage at 5-on-5 was 50.6, but his Corsi-for (relative) was minus-3.1.  It got worse in the playoffs.  He had one assist in 14 games, and the Corsi numbers were lower: 44.9 percent/minus-6.9 (numbers from war-on-ice.com).  Sometimes trade deadline deals catch lightning in a bottle.  Sometimes they drive you to the bottle.  This one was closer to the latter.

Curtis Glencross once scored 26 goals and had 48 points in a season.  Trouble is, he did that at age 29 with the 2011-2012 Calgary Flames.  When he came to Washington for a pair of draft picks at the trading deadline, he was 9-19-28 in 53 games with the Flames, part of a declining trend in goals and points production from that career high year.  He did get off to a fast start with his new team, going 2-2-4, plus-2, in his first two games with the Caps.  However, he was 2-1-3, minus-3, over the last 16 games of the regular season.  That would look productive against his postseason numbers of 1-0-1, minus-5, in 10 games, including the moment when he became a Cap, and Caps fans had a feeling things would not end well in the series against the Rangers:

Fearless’ Take:  I got nuthin’.  I can’t make this vomit-covered Twinkie look like Michelangelo’s “David.”

Cheerless’ Take:. Ya win some, ya lose some.  Seems like the Caps and their fans lose a whole lot more than “some” and win a lot less than “some.”

Let’s face it, the comings and goings did not have their intended effect.  Washington rarely goes for the big splash at the trading deadline, and they had no activity otherwise, other than those couple of deadline deals.  In a way, it ties the knot in the season that two deadline acquisitions should figure in on what might have been the worst single play of the season – the Glencross turnover in overtime that turned into a Ryan McDonagh shot that glanced off Gleason and behind goalie Braden Holtby that gave the Rangers a 2-1 win in Game 5 and started another “3-1 lead blown” scenario for the Caps in the postseason.

This is one aspect of the season that might best be forgotten.