In our look back at ten memorable goals in Washington Capitals history, number five comes from Alex Ovechkin, only it is not the one you might be thinking of.  Sure, when you think of memorable Ovechkin goals, “The Goal” is what immediately springs to mind.  That is not the one we are thinking of… there is another, one that came just four days after our Memorable Goal number 6. 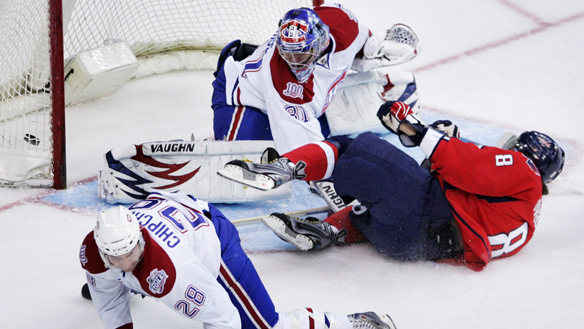 Mid-week games in the dead of winter do not generally generate a lot of excitement, and even though it was the Montreal Canadiens visiting Washington on a Wednesday night in mid-February, one cannot say that excitement was expected.  At least, not of the sort fans would be treated to in this contest.

The Caps and the Canadiens were going in opposite directions in the month of February when the Canadiens came calling.  Washington was 5-1-1 for the month and found themselves in their customary standings position atop the Southeast Division.  On the other hand, Montreal was 2-6-0 for February and had not won a road game in the Eastern Conference in a month.

This would be the fourth and last game of the season series between the clubs, a series in which the Caps won two of the first three games, outscoring the Canadiens overall by a 9-6 margin.  There was something of an odd subplot to this game.  Alex Ovechkin faced Montreal seven times at Verizon Center in his career, and seven times he recorded at least one point.  He was 7-6-13 overall in those seven games, including a four-goal/five-point performance on January 31, 2008 (his career first hat trick at home), on his way to a 65-goal season.

It was Montreal that would score first less than three minutes into the contest.  With Mike Green in the box for sending the puck over the glass, Chris Higgins converted on the ensuing power play.  It was the only score in a first ten minutes that has the teams going back and forth.  In those first ten minutes the Caps and Canadiens split 12 shots on goal down the middle.  Montreal had seven shots blocked to three for the Caps, but Washington had seven missed shots to six for the Canadiens, a total of 17 shot attempts for Montreal and 16 for the Capitals.

Just as the clock was hitting the 10:00 mark, though, the excitement level ramped up in a big way.  It started in the Montreal end with defenseman Mike Komisarek looking to move the puck up and out of the defensive zone to get a line change.  He sent the puck diagonally up ice to teammate Roman Hamrlik and headed to the bench.

The pass was too far for Hamrlik, and seeing the opportunity to take advantage of the miscue, Alex Ovechkin darted down the center red line toward the referees’ crease opposite the player benches. As he got to within a stride of the side boards, in one move he spun counterclockwise and backhanded the puck off the wall.  Now facing up ice, he darted past Hamrlik to take what amounted to a pass to himself.  Kyle Chipchura tried desperately to get back on the play to cut off Ovechkin’s path to the net, but Ovechkin lowered his right shoulder into Chipchura as he circled through the left wing circle to the net.  Chipchura could do little but hang on as Ovechkin closed on goaltender Carey Price, eventually hauling Ovechkin down to the ice.  As Ovechkin reached the edge of the goal crease sliding on his right hip, he managed to flip a shot at the net, and by the time he reached the other side of the crease, Ovechkin had his left arm raised celebrating the goal he scored past Price’s right pad to tie the game.

It was a goal that the Caps would need in what ended up being a special teams contest, the Caps scoring a power play goal and allowing three man-advantage scores by the Canadiens on the way to a 3-3 tie after 60 minutes.  After a scoreless overtime, the Caps would win in the freestyle competition.  It was the Caps’ third straight win and part of what would be a 19-9-3 finish after February 1st that enabled the Caps to finish first in the Southeast Division and second in the Eastern Conference.

For Ovechkin, the goal was his 42nd of the season, fifth in three games and ninth in eight games in February on his way to a 56-goal season and his second straight Maurice Richard Trophy leading the league in goals.

So, why is this goal memorable and not “The Goal?”  It is almost like asking which one is your favorite Beethoven symphony.  There are a lot to pick from, and there really is not a wrong answer.  “The Goal” was an announcement – with a bull horn into a public address system – of a rookie’s skill and virtuosity.  And, even though it was the last goal scored by the Caps in what was a 6-1 win over the Phoenix Coyotes, it showed a relentless appetite for goal scoring that has fueled Ovechkin’s career for ten years.

This goal against the Montreal Canadiens was the entire Ovechkin package, though.  There was the split-second realization of an opportunity – the too-long pass from Komisarek to Hamrlik – and the absence of hesitation or doubt in pouncing on the chance.  There was the instinct to make the only play available to him that would yield a scoring opportunity, backhanding the puck off the boards and chasing it down.  There was the speed to fend off a closing Kyle Chipchura and the strength to keep his momentum with Chipchura draped all over him as he curled to the net.  There was not giving up on the play, getting the shot off and beating an up-and-coming goalie in Carey Price.

The context of this goal was important as well.  The Caps were closing in on a playoff spot in this game, while in the January 2006 game in which Ovechkin scored “The Goal, the Caps were already out of playoff contention, in 14th place in the Eastern Conference, 16 points behind the New Jersey Devils.  The goal against Montreal tied the contest; “The Goal” was the sixth and last of a 6-1 win over the Phoenix Coyotes.  The Caps were playing a Montreal Canadiens club that was fifth in the East; the 2006 Caps were facing a Phoenix Coyotes team that ended the season 12th in the Western Conference.  When the Caps and Ovechkin faced Phoenix in 2006, they were facing a goalie – Brian Boucher – making only his ninth appearance of the season.  It was the fourth time in six  appearances in which he played all 60 minutes that he allowed four or more goals.  When Ovechkin and the Caps faced Montreal in February 2009, they faced a goalie – Carey Price – who was struggling (he allowed 15 goals on 91 shots in his previous four appearances), but who was being groomed to assume the number one duties for the Canadiens and who had an 8-0-4 run earlier in the season.

In the end, it amounts to a distinction without a difference.  About the only thing that really distinguishes these two goals is that the goal scored against Montreal was done in the friendly confines of Verizon Center where 18,000 fans could share a memorable goal in person.

I remember watching this goal. My jaw just dropped, unable to fathom what I just witnessed. Simply dazzling.

All I remember thinking is "Well, now Alex Ovechkin has scored the TWO greatest goals I have ever seen."