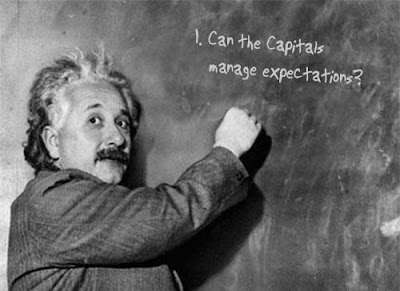 Can the Capitals manage expectations?

If you peruse the preseason prognostifying, the consensus appears to be that the Capitals are a conference-final caliber team.  Only the Tampa Bay Lightning are consistently ranked ahead of the Caps in the Eastern Conference.  The last time the Capitals were this much a darling of the hockey intelligentsia was in 2010.  For example, looking at the NHL.com staff predictions for 2010, nine of 15 of the prognosticators picked the Caps to win it all.  They famously did not.

That 2010 team was still young; the team’s core was still 25 years of age or younger.  This year’s team does not have quite the same burden of expectations as that 2010 team, but it is one that is perhaps better equipped to deal with the level of expectations they will bear.  First, it is an older, more experienced team.  Sure, they have endured a number of playoff disappointments since that early 2010 early exit against Montreal, but with age comes a certain maturity and sense of urgency.  Alex Ovechkin turned 30 years of age a few weeks ago.  Nicklas Backstrom will turn 28 in November.  Karl Alzner just turned 27. These are players squarely in their prime.  Put another way, they can see the top of their respective career summits from here, and there might not be as many chances in front of them to win a championship as might have been the case three or four years ago.

Second, this team is more balanced than perhaps any team in this era of Capitals hockey.  It is not as top-heavy an offense/forward oriented team as the 2010 edition.  The defensive top-four of Alzner, John Carlson, Matt Niskanen, and Brooks Orpik has 2,179 games of regular season and an additional 271 games of postseason experience.  We talked about the importance of an experienced top-four on defense back before that 2009-2010 season, particularly in its relationship to a Cup winner.  Part of what such experience provides is a sense of perspective, in being able to manage expectations to keep from too-high highs and too-low lows.

Third, the Caps have their best goaltender since Olaf Kolzig was in his prime.  Braden Holtby is certainly better than any goaltender the Caps have employed in the current, post 2004-2005 lockout era.  Having such goaltending is not sufficient to winning a Stanley Cup (see: “Lundqvist, Henrik”).  But it could be a necessary condition.  Of the last ten Stanley Cup Champions, seven of the number one goaltenders in those postseasons posted a save percentage of .920 or greater in the postseason, four of those times a save percentage of .930 or greater.  In those same ten postseasons, those same number one goaltenders posted goals against averages of less than 2.00 five times.

In three postseasons, Braden Holtby has been over .920 in save percentage all three years (over .930 twice, including a league best .944 last spring).  He has been under 2.00 in goals against average twice, including a league best 1.71 last spring.  Among goalies appearing in at least 20 playoff games over the past four postseasons, Holtby and Tuukka Rask are the only ones with a combined goals against average of less than 2.00 (both at 1.92) and a save percentage over .930 (both at .936).  What is more, he has been consistently good.  He ranks fourth over the last four postseasons in games in which he allowed fewer than two goals (15), playing barely half (34) of the games played by the three goalies ahead of him (Lundqvist, Corey Crawford, and Jonathan Quick).  He is fifth in games in which he posted a save percentage over .930.

Fourth, the Caps were more aggressive in addressing shortcomings as an off-season task than as a trading deadline effort.  This is perhaps the biggest difference between the regime of George McPhee as general manager and that of Brian MacLellan to date.  In each of the last two off-seasons, MacLellan aggressively filled holes, last season by signing free agent defensemen Matt Niskanen and Brooks Orpik, this summer by trading for T.J. Oshie and signing free agent Justin Williams to shore up a weak right side among the forwards.  What is more, those four players bring more than 3,000 regular season and playoff games of experience into this season.  Orpik and Niskanen had a full slate of regular season games to integrate themselves into the Caps system; Oshie and Williams will have that opportunity this season.

Maturity, urgency, balance, goaltending and defense, experience, assimilation.  All contribute to a club that could be, if not the most talented from a skills standpoint to withstand the rigors of a long regular season and a grueling playoff tournament, then perhaps the most prepared team in the history of this franchise to face the level of expectations set forth for them.