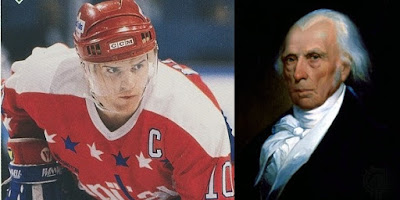 There is the superficial similarities between Madison and Miller.  Both came from large “families,” so to speak.  Madison was the oldest of 12 children, while Miller is a member of one of the largest families in hockey.  Ten hockey-playing members, in fact.

Both were a bit undersized for their positions.  “Jemmy” Madison was the smallest President in American history, coming in at five-feet four-inches tall and barely breaking 100 pounds.  Miller, who spent most of his career as a checking forward in a division known for its bare-knuckled physical play, was just 5’11/195 pounds.

There are deeper similarities, though.  Madison is often referred to as the “Father of the Constitution.”  He was a major force in the calling of a constitutional convention to replace the Articles of Confederation of the new Republic and was a prolific speaker during the proceedings of the convention. His work was not limited to that of debate within the confines of the convention, though.  He was a durable advocate of the product of that convention, assuming the role of a leader of the effort to ratify the new constitution.  He was one of three authors (all writing anonymously) of a series of articles published over a ten-month period in 1787 and 1789 that constituted a comprehensive argument in favor of ratification and would later be compiled and known as “The Federalist Papers.”  Then, as a member of the new House of Representatives, he was a principal sponsor of the first ten amendments to the Constitution -- the "Bill of Rights."

Miller could not be fairly claimed to be the “father” of the style of hockey the Capitals played over his tenure with the club, but he was the embodiment of it.  From the time he arrived in Washington in a New Year’s Eve 1987 trade with the New York Rangers until his last season with the Caps (and in the NHL) in 1998-1999, Miller was the epitome of a 200-foot, hard-working sort of player what was the style of the Capitals of the period.  He was an extraordinarily durable player, especially given his size and style of play, setting what was a career record of 940 games played in a Capitals uniform (since eclipsed), appearing in more than 95 percent of the games played by the Capitals in the 12-plus seasons he spent with the club.  Although he was a fine scorer in his college days (82 goals and 163 points in 163 games at Michigan State), he would forsake the scorer's role to find multiple ways of contributing at both ends of the ice -- the timely goal or taking on the opposition's top offensive threat.

If there was one thing that characterized Madison’s tenure as chief executive, it was presiding over the War of 1812, thought be some to be one conflict in the much broader series of conflicts grouped under the “Napoleonic Wars” that involved more than two dozen participants.

In 12 full seasons with the Capitals, Miller had some of his harshest competition in the battles of the Patrick Division (later morphing into the Atlantic Division) and in particular the two Pennsylvania and three New York area teams that made for the nastiest rivalries.  In those 12 seasons, Miller went 59-112-171, plus-36 in 335 games against those five teams, his 171 points representing more than 40 percent of the points he scored as a Capital (408) and his plus-36 almost half way to his career plus-75 with the Caps.

In his post-Presidential years, Madison went on to serve as a member of the Virginia state constitutional convention, wrote a number of essays on political subjects, and served as chancellor at the University of Virginia, thus passing along his experience and employing his knowledge for the benefit of future generations.  In Miller’s case, coaching was the avenue.  He started soon after his playing days were over, serving as an assistant with the AHL Grand Rapids Griffins.  He also served as an assistant with the Anaheim Ducks and the New York Islanders in the NHL, among other positions, before returning to his alma mater – Michigan State University – where he serves as an assistant coach.

Given the breadth and depth of his contributions to a young nation, perhaps James Madison does not get as much historical recognition as he should for those contributions.  Kelly Miller has played more games than all but two players in Capitals history, and no one has played in more postseason games (he’s tied at 100 with Dale Hunter).  He is in the top-20 in team history in regular season points scored and would arguably be the last name fans would identify to be on that list.  Kelly Miller was the personification of a Capitals style of hockey for more than 1,000 regular season and playoff games, but in the years that have passed since his retirement, he does not seem to get nearly the credit he might deserve for being such an important part of the franchise’s history.  In that sense, his career bears a resemblance to that of the Nation’s fourth President.