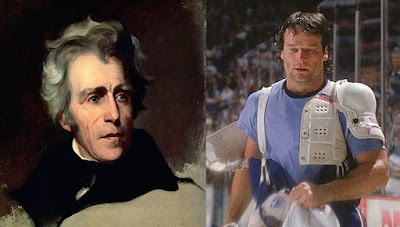 Andrew Jackson was the seventh President of the United States. His administration was but one part of what historians refer to as the “Age of Jackson.” The person behind the age inspired considerable respect…and hate.  In that sense, he is not unlike a former Washington Capital whose years spent in Washington might be considered its own “age” as well, the age of Dale Hunter.

Where Jackson was born is in some historical dispute. It seems that what is agreed upon is that he was born on or near what is now the border of North and South Carolina, an area that today remains rural, but in that era would have been little more than wilderness. Growing up was a battle for Jackson, quite literally. At the age of 13 he was a courier in the Revolutionary War, during which he became a prisoner of war. He grew up to be a lawyer in the frontier territory of Tennessee, where a lot of the work was in hotly contested land claims and assault cases.  He grew up a prideful person, quick to fight when he perceived assault on his honor, and he dueled Charles Dickinson, who published an attack Jackson and his wife, killing him while suffering a wound that he would carry all his life.  It was a reflection of a personality that was once described as “tough as old hickory wood on the battlefield,” leading to his nickname, “Old Hickory.”

Dale Hunter didn’t have quite the raw and treacherous youth of Jackson, but neither was it entirely dissimilar. He was born in Petrolia, Ontario, the town’s name being derived from the oil boom that swept that region of Ontario in the 1860’s, and he grew up in Oil Springs, a town even smaller than that in which he was born. In terms of his hockey development, he clearly had talent, but he was also something of a provocateur. In three seasons in the QMJHL (Kitchener, Sudbury), he had 98 goals and 259 points in 188 games, but he also accumulated 492 penalty minutes. And it was not any different when he arrived in the NHL. Drafted by the Quebec Nordiques, he would be nicknamed “The Nuisance” by his head coach, Michel Bergeron for his ability to antagonize opponents.

Jackson was also an astute manager of his affairs.  He managed to accumulate sufficient resources to build a home and general store near Nashville.  To this he added a plantation, the “Hermitage” and additional land later.  He was owner of more than 1,000 acres that continues today as a museum.

What Dale Hunter built came after his playing days were over, and was accomplished in very different ways (Jackson is said to have once owned more than 300 slaves).  He took over the London Knights of the Ontario Hockey League as co-owner, president, and head coach in 2000.  Since then, his Knights have won eight division titles in the OHL, four OHL championships, and twice won the Memorial Cup as Canadian Hockey League champion.

As President, Andrew Jackson might have been described as confrontational toward elites.  He advocated abolishing the Electoral College and opposed patronage.  But he also had the idea of the “commander” about him, making use of the veto and his partisan position in an effort to dominate Congress (it was under Jackson that the old “Republican” party split, with “Democratic-Republicans,” what would become the Democratic Party, following Jackson), and throwing his weight against the rechartering of the Second Bank of the United States and efforts to end protective tariffs.

Dale Hunter was not any less the “commander” as a Washington Capital, and he was no less confrontational on the ice.  He came to the Caps in a 1987 trade and would eventually become the ninth captain in team history in 1994.  He led be example, and quite an example it was.  He was widely considered a “dirty” player, a reputation Hunter would inflame in a 1993 playoff game against the New York Islanders in which he checked Pierre Turgeon into the boards after Turgeon scored an insurance goal in what would be the series-clinching win for the Islanders.  Turgeon suffered a separated shoulder than caused him to miss the first six games of the next playoff round, but Hunter received a 21-game suspension from new Commissioner Gary Bettman, then the longest suspension in league history for an on-ice incident.

Hunter might have been the bete-noire of 29 other teams, but he was a rough sort beloved by Caps fans, especially after scoring the game-winning, series-clinching overtime goal in Game 7 of the Patrick Division semi-finals at home against the Philadelphia Flyers in 1988.  He served as Captain of the club from 1994 until he was traded to the Colorado Avalanche late in the 1998-1999 season and was a player who, throughout his tenure as a Washington Capitals player, inspired strong feelings, good and bad.  He was a player who commanded respect for his skills, but who inspired hate among opponents and their fans for his antics outside the rulebook.  Hunter is the only player in league history to record at least 300 goals (323) and accumulate at least 3,000 penalty minutes (3,565).


Andrew Jackson defined an age in American history and was an important transitional figure from the revolutionary past to a more modern nation.  He was a complex personality that could, even in the context of his achievements, inspire respect and hate.  Dale Hunter was a soft-spoken sort off the ice, but on-ice he was as much a person capable of inspiring respect and hate, despite his achievements (the Caps reached the postseason in 10 of his 11 full seasons with the club, including reaching their only Stanley Cup final).  In many respects, Andrew Jackson and Dale Hunter were one-of-a-kind.
Posted by The Peerless at 12:00 PM