The Peerless Prognosticator is ON THE AIR!!! -- Game 6: Capitals at Oilers, October 26th

The Washington Capitals embark on their first extended road trip of the young season this week, starting their journey with a stop in Edmonton on Wednesday night to take on the Oilers.  An early season meeting against the Oilers has become an early season staple of the Capitals schedule, and this is the fourth time the Caps will meet the Oilers in October in five years (the only interruption being the abbreviated 2012-2013 season).  Washington and Edmonton have alternated victories in that four-game stretch, the Caps winning the last meeting of the clubs in Edmonton by a 7-4 margin last season.

The Oilers that the Caps will face this time around have to qualify as one of the big early season surprises.  Entering this contest on a three-game winning streak, Edmonton has a 5-1-0 record that is best in the Western Conference and is second in the league only to the Montreal Canadiens (5-0-1).  What sets this team apart from recent, disappointing versions of the Oilers is that this version is adding defense and goaltending to a prolific offense.  Last year’s 27th-ranked scoring defense is currently ranked ninth in that category.  The improvement in their scoring defense, married to a deadly offense (tied for first in goals per game) has the Oilers second in the league in scoring differential (plus-1.16 goals per game).

The Oilers have seven players with at least two goals so far, a group led by Connor McDavid.  Coming off an injury-shortened rookie season that still left him fourth among rookies in points and third in assists, McDavid was named the youngest team captain in NHL history this season, at 19 years and 266 days old when named, 20 days younger than Colorado’s Gabriel Landeskog when he was named the Avs’ captain in 2012.  Going into Tuesday’s games, McDavid was tied for the league lead in multi-point games (three), and he is the only player in the league with two three-point games.  The odd part about his scoring profile is that he recorded all four goals and five assists he has so far in four games against Western Conference teams.  He is looking for his first points against an Eastern Conference team, having been blanked by Buffalo and Carolina.  He has faced the Caps just once so far in his career, going 1-1-2, minus-2, in the Oilers’ 7-4 loss to the Caps last October.

At the other end of the age scale among the multi-goal scorers for the Oilers is Mark Letestu (31).  His goal scoring has an odd aspect to it as well.  Both of his tallies came on the road, in Calgary in a 5-3 win and in Winnipeg in a 3-0 win last Sunday.  Letestu has carved out a solid career as primarily a checking line forward that can chip in occasional offense.  He has had at least ten goals in five of his six full seasons in the league coming into this season, missing out when he sat out 28 games of the 2014-2015 season with a groin injury and finishing with seven goals.  Now in his second year in Edmonton, the Oilers are his third NHL team, having played for Pittsburgh and Columbus.

Edmonton’s offense is certainly weighted on the forward side of the roster.  Only one defenseman has a goal this season.  That one came off the stick of Darnell Nurse in the Oilers’ last game, a 3-0 win over Winnipeg.  Nurse, who was the seventh overall pick in the 2013 entry draft, is the youngest defenseman to dress for the Oilers so far this season (he will turn 22 in February).  Only 13 of the 214 defensemen to dress so far this season are younger than Nurse.  Last season was his first full season with the Oilers, and he finished with three goals and ten points in 69 games.  He is also a middle-of-the-pack defenseman on a team with poor possession numbers among their blueliners (47.20 Corsi-for at 5-on-5).    He is without a point and even in plus-minus in his only appearance against the Caps. 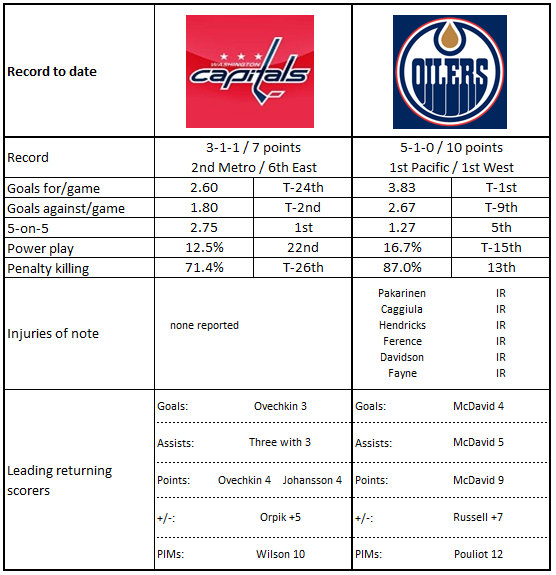 1.  Speaking of poor possession numbers, no defenseman for Edmonton is at 50 percent or better in Corsi-for at fives.  Oscar Klefbom is tops at 49.11 percent (numbers from Corsica.hockey).

2.  Twelve of 21 skaters to dress for Edmonton so far this season are 25 or younger.

3.  The Oilers lead the league in overall shooting percentage (13.3 percent).  It’s a good thing, too, because they have the fifth-worst shots per game differential in the league (minus-4.4).

4.  Only Calgary (53:39) and Anaheim (47:57) have spent more time (through Monday’s games) killing penalties this year that the Oilers (40:50).  The power play/penalty killing time differential is sixth worst in the league (minus-9:10).  Only four teams have taken more minor penalties than Edmonton (28).

5.  Edmonton is 24th in team Corsi-for at 5-on-5 (47.07 percent).  This is part of an odd early-season scenario in which four of the top seven teams in the league standings (Montreal, Vancouver, Detroit, and the Oilers) are among the bottom 11 in Corsi-for (numbers from Corsica.hockey).

1.  No Capitals defenseman has recorded a goal so far this season.  As a group, they are shooting 0-for-49.  However, all six of them have points.  But, only one of them (Dmitry Orlov) has a power play point.

2.  Washington is the least penalized team in the league, fewest overall (17) and fewest minor penalties (14).  However, the fact that they have two fighting majors on their record means that they are fifth-lowest in penalty minutes per game (8:00).

4.  No team in the league has taken fewer faceoffs per game than the Caps.  They are tied with Carolina, taking 57.2 faceoffs per game (Carolina’s winning percentage is better, 56.3 percent to the Caps’ 52.1 percent).

5.  Washington has allowed the fewest shot attempts per 60 minutes at 5-on-5 so far this season (47.38; numbers from Corsica.Hockey).

On a team with 12 skaters age 25 or younger, Milan Lucic is almost a graybeard at the age of 28. After spending his first eight NHL seasons with the Boston Bruins, Lucic was traded to the Los Angeles Kings in June 2015 and signed with Edmonton as a free agent this past summer.  Lucic has been a player with an interesting mix of offensive skill (six straight seasons coming into this one averaging at least half a point per game) and a physical edge (more than 200 hits in four of his last five seasons, interrupted only by the abbreviated 2012-2013 season).  He is getting a lot of work with his new team, currently posting the highest average ice time of his career (18:25) and second among forwards only to Connor McDavid (21:07).  On a team with considerable skill among its forwards, Lucic’ contributions in that area make the Oilers a much more formidable team.  He is 6-14-20, minus-3, in 29 career games against the Capitals.

John Carlson leads the Capitals in ice time per game (23:57) and is second among skaters in shots on goal (17 to Alex Ovechkin’s 21).  But all he has to show for that in the offensive end to date is one point, an assist in the Caps’ 2-1 win over the New York Islanders in the home opener.  Only Los Angeles’ Jake Muzzin has fewer points (none) with more ice time per game (24:10).  Carlson ranks fifth in shots on goal by league defensemen, but his 17 shots on goal without a tally is the most shots on goal for a defensemen without a goal in the league.  He is keeping some good company in that regard, though.  Through Monday’s games, Kevin Bieksa was 0-for-16, Kris Letang was 0-for-16, Duncan Keith was 0-for-16.  With Carlson, that would be a pretty good top-four.  But the Caps need to get more out of their blueline than what they have so far (no goals among the six defensemen to dress).  And it starts with Carlson.  He is 1-5-6, plus-11, in 22 career games against Edmonton.

These aren’t your father's Oilers.  Well, not your older brother’s Oilers.  At the moment they do look a little like your father’s Oilers with Connor McDavid doing a passable version of Wayne Gretzky, Jordan Eberle doing a decent job of being Jari Kurri, and…well, there is no current version of Paul Coffey.  The point being that this team, at least in the early going, has made life difficult for goalies, and unlike recent editions of the club appear to have an ability to keep pucks out of their own net.  It remains to be seen if this is merely an early-season blip, or if it is a hint of things to come with this team.  For purposes of this game it hardly matters.  If the Caps get caught up in a track meet with the Oilers, the start of the western Canada trip is likely to get off to a bad start.  It will be important for the Caps to impose their will on the Oilers’ skill.  Break out those t-shirts.